82% of Young Adults Say Society Is in a Leadership Crisis

In The Connected Generation, a recent Barna study conducted in partnership with World Vision, data show that young adults face some unique headwinds on their road to becoming effective leaders. When we take time to listen—an essential practice for connecting with 18–35-year-olds—we hear a sense of unease about the future and uncertainty about the kind of leaders that could make a difference.

Part of it is the underlying sense of anxiety that permeates many societies today. For good reason, the connected generation perceives deep, wide, systemic problems facing the world’s future. Four out of five affirm—and nearly half strongly affirm—that “society is facing a crisis of leadership because there are not enough good leaders right now” (82%). This is one of the most widely endorsed statements in the entire global survey, which suggests its significance to this generation. In addition, one-third believes that “what it takes to be an effective leader seems to be changing.” 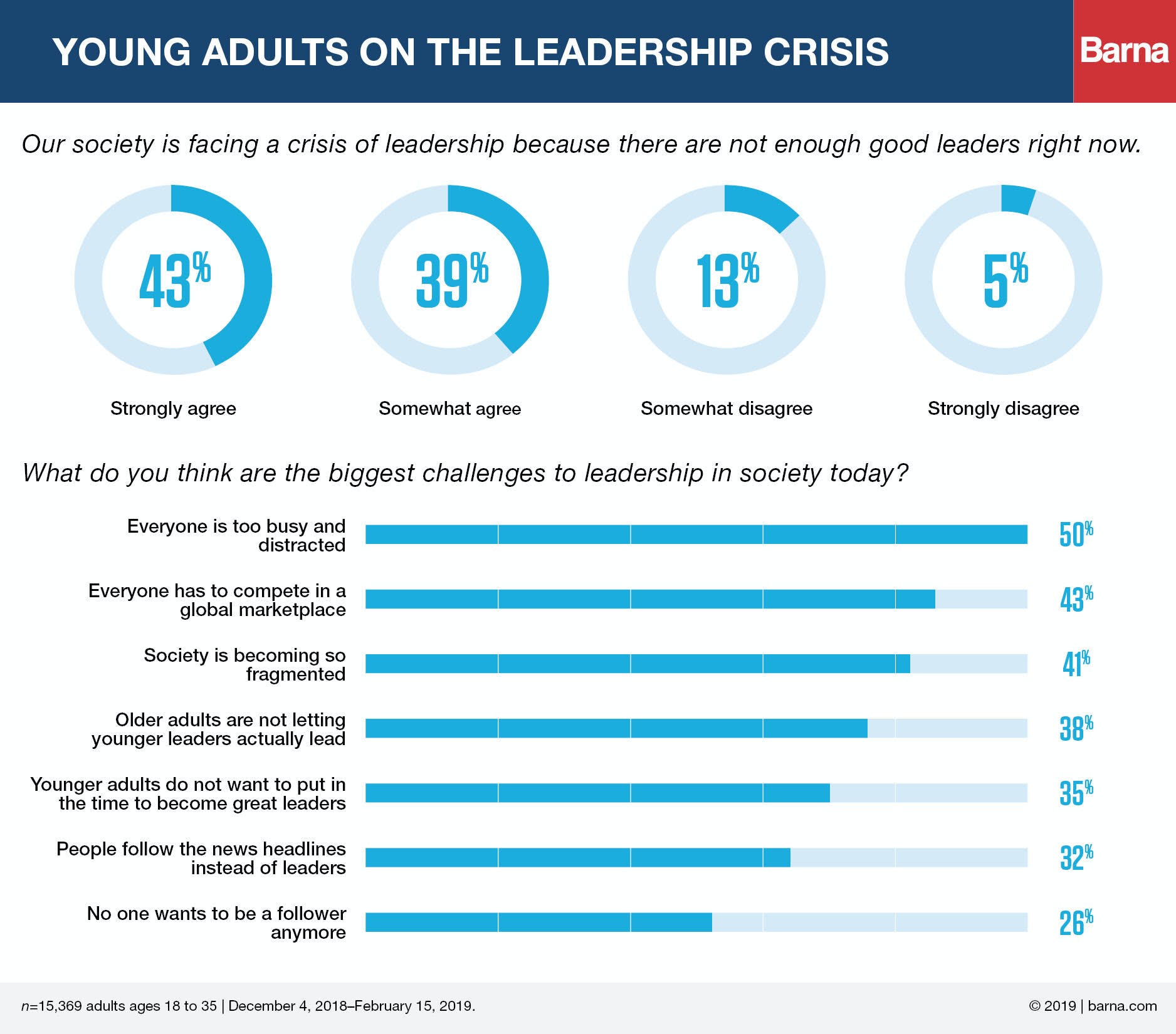 Spheres of Leadership
Barna asked young adults in what areas of their life they exercise some level of leadership. Nearly half say they are a leader in their family, and one-third feels like a leader in their workplace or elsewhere, such as a church or government. We group the latter into a category called “leaders outside the home,” who are half of all respondents (51%); one in five is a “family-only leader” (19%), meaning they select family as their only sphere of leadership.

Three in 10 young adults do not now (8%) or have never (22%) considered themselves to be a leader; we call them “non-leaders,” since that’s what they call themselves. Given that male leadership has been the rule of thumb for most of human history, more young women (35%) than young men (26%) are non-leaders. (Relatedly, 57 percent of family-only leaders are women, and women are more likely than men to see gender inequality as a challenge to leadership, 35% vs. 24%.)

Since many cultures look first to older members of the community for leadership, those under the age of 25 are more apt than those on the older end of the age range to say they are not leadership material (35% vs. 28%). Unmarried adults, rural residents, those who are less educated and people who report economic insecurity are more likely to reject the “leader” label, compared to married, highly educated, financially stable entrepreneurs who live in the city.

There’s a high concentration of young adults in secular climates who do not consider themselves to be leaders (39% vs. 23% Christian climates, 36% multi-faith climates). Every European country in the study has a higher percentage of self-identified non-leaders than the global average. Concurrently, 41 percent of agnostics, atheists and “nones” deny they are a leader in any sphere.

The Role Churches Play
So how are churches contributing to the development of leaders? For one thing, there are millions in the connected generation who consider themselves to be leaders in their church or faith community. It’s a relatively small slice of the total population, but one in 11 says they are a leader in their community of faith (9%). More young adults in majority Christian climates (13%), especially in the global South (23% Africa, 10% Latin America / South America), report serving as leaders in their church.

We asked churchgoing young adults about three different domains of leadership development: (1) opportunities to contribute, (2) models of faithfulness (how they’ve been inspired by their church relationships) and (3) seeing needs and serving others.

Churches are most effective at giving young adults chances to “feel like part of a team,” to be inspired to “live generously based on the example of others in my church” and to “better understand the needs of the poor.” Those who are self-described leaders are more likely to take advantage of the opportunities offered by their church. 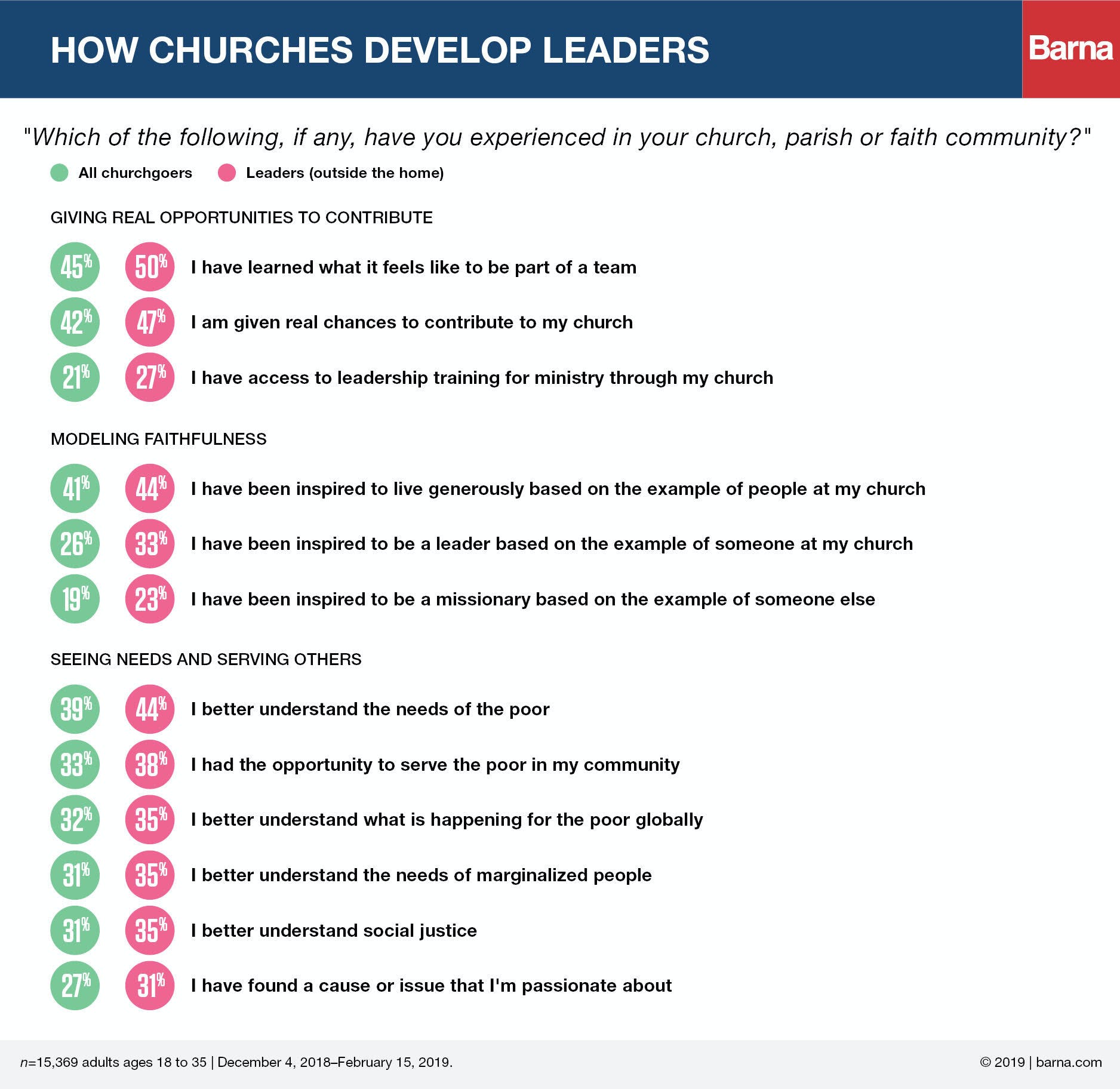 David Kinnaman Comments on the Challenges to Developing Young Leaders
“The connected generation is looking for the Church to provide real, tangible, meaningful opportunities for development,” Barna president David Kinnaman notes. “They want the church to be a laboratory of leadership, not just a place for spirituality. They want their faith to intersect the realities of life and, as budding Christian leaders, they want to address real life issues.

“Some leadership qualities and principles are timeless and rise above cultural or generational differences: honesty, integrity, conviction and courage, to name a few,” Kinnaman explains. “But other ideas about what makes a good leader are contextual and therefore not always applicable everywhere to everyone. Problems with and barriers to leadership often differ, as well. ‘Leadership’ is a concept highly shaped by culture and, increasingly, by generation.

“This relates to our first challenge to developing young leaders today: Generations perceive and practice leadership differently. Remember, many in the connected generation agree that ‘what it takes to be an effective leader seems to be changing,’” Kinnaman adds.

“If you are trying to develop young leaders, listen. What words do they use when they talk about accomplishing great things? When they dream aloud about participating in God’s mission? When they brainstorm about starting something new or rewarding?

“A second challenge is that we lack effective pipelines, processes and models to form young leaders,” Kinnaman continues. “Based on U.S. data collected over three decades, we know that institutions in general and churches in particular are performing below ‘replacement levels’ when it comes to identifying and preparing new leaders.”

“If we’re not making room for younger leaders today,” Kinnaman concludes, “they won’t be around tomorrow.”

Photo by Jehyun Sung on Unsplash

In his 2011 book You Lost Me, Barna president David Kinnaman identified three trends shaping our culture: access (which, thanks to WiFi everywhere, is exponentially more amplified today), alienation (from institutions and traditions that give structure and meaning to our lives) and authority (which, like institutions and traditions, is increasingly viewed with suspicion). In the years since that book released, Kinnaman and the Barna team have adopted a phrase to describe our accelerated, complex culture that’s marked by unlimited access, profound alienation and a crisis of authority: digital Babylon.