This article is adapted from The Connected Generation report. Order your copy today!

Caring for the poor and vulnerable is a defining characteristic of being a Christ-follower, according not only to scripture but also to many Christian 18–35-year-olds (43%) in The Connected Generation study, a recent international Barna project produced in partnership with World Vision. If this is a primary sign that someone is a Christian, what kind of impression are faithful 18–35-year-olds leaving around the world?

Let’s look at the humanitarian impact of Christianity as reported by a generation with a longing for justice—starting with how faith factors into the global problems young adults prioritize.

Corruption Is a Top Concern to Young Christians
Young adults who aren’t religious are far more likely to identify global climate change as the greatest problem facing the world’s future (46%), but the closer respondents are to religion, the less likely they are to share this environmental concern (27% of practicing Christians, 26% of those practicing other faiths). Instead, corruption—perhaps because it is perceived as a moral problem—tops the list of pressing global problems identified by practicing members of Christianity (54%) as well as other faiths (55%, compared to 37% of no faith). Beyond that, practicing Christians are like their peers in ranking extreme poverty (35%) and racism (33%) among key threats to the world’s future. 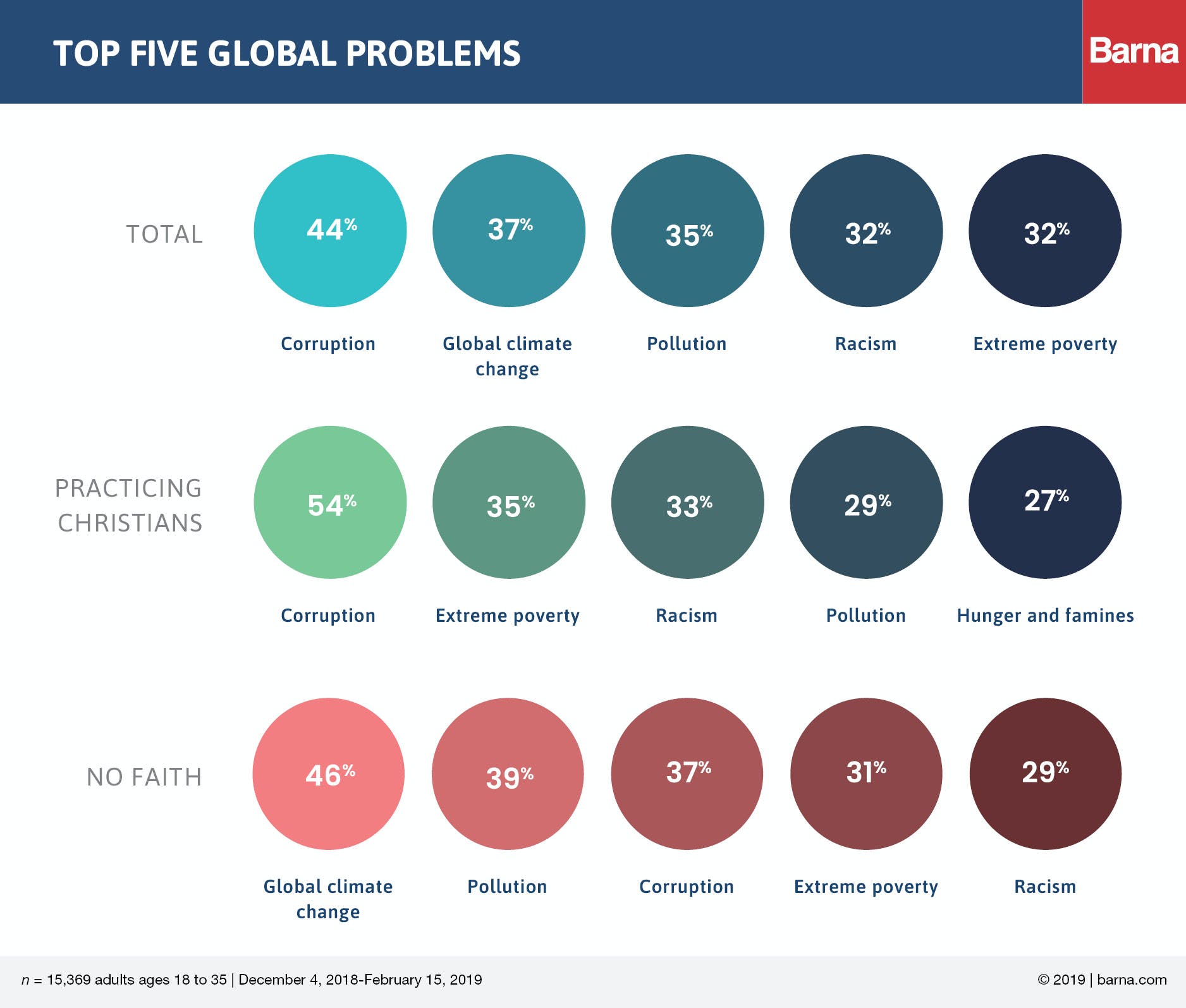 Christians & Nones Disagree on the Church’s Impact
Though the methods and motivations may vary, the data show a pervasive sense of humanitarian responsibility across many segments in this study, and the Church can foster these passions. After all, one in four young adults says caring for the poor is one of their goals for the next 10 years, and opportunities to fight injustice are among the top things religious respondents say they want more of in their worship community.

Data from both The Connected Generation and Faith for Exiles show that young Christians who engage meaningfully with their faith and church tend to report that their church has already helped them understand the needs of the poor (45%) and marginalized (36%) and provided opportunities to serve those in need in their community (38%). Similarly, about a third of practicing Christians in this age group says their church has equipped them with an understanding of social justice (35%) or that they’ve found a cause or issue they’re passionate about through their church (31%). In the U.S., at least, other Barna research indicates this progress could begin with the pulpit; in The Mercy Journey, a study conducted with The Reimagine Group, a majority of pastors said they encourage members to help the poor (69%) or people in distress (73%). 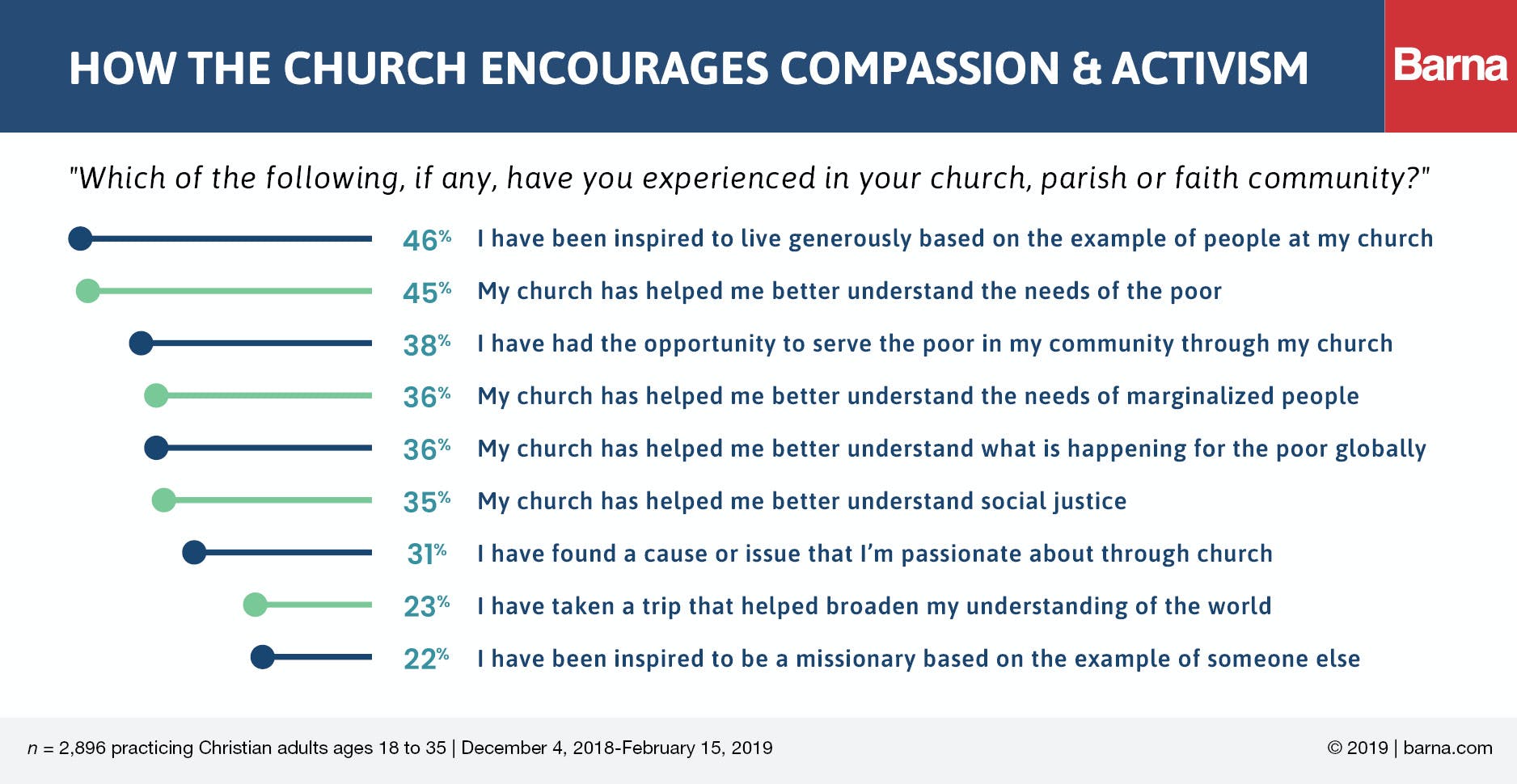 Accordingly, in their personal lives, Christian young adults around the world say their beliefs inspire them toward action. More than half (56%) say they are concerned about the welfare of others because of their beliefs. They are also almost twice as likely as those with no faith to be inspired to give of their time to help others in need (56% to 32%). Similarly, Christian young adults are more likely than those with no faith to report that their beliefs compel them to give of their own resources (46% to 26%) and stand up against corruption (47% to 37%). 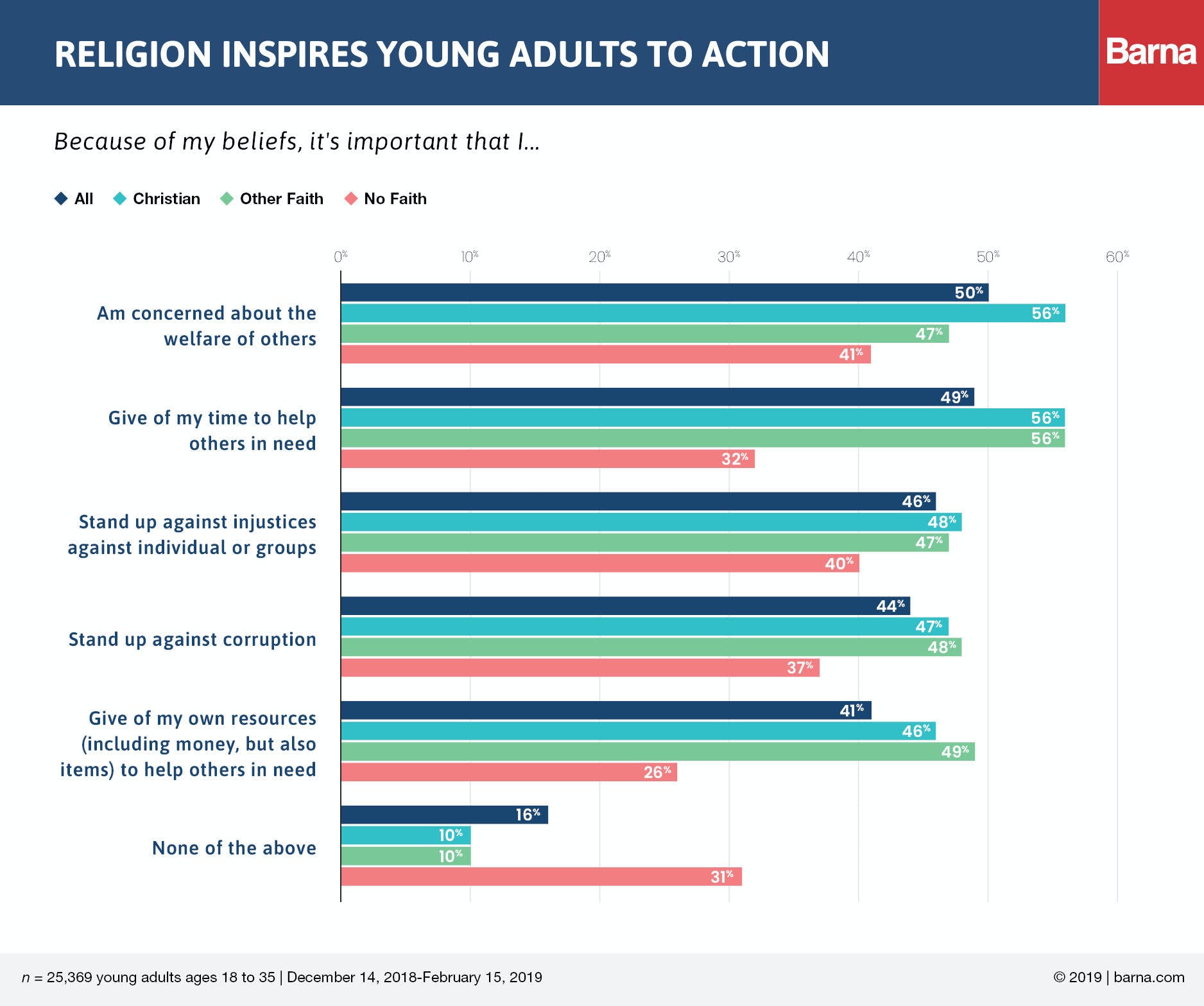 Overall, a slight majority of 18–35-year-old respondents feels the Church is definitely (16%) or probably (42%) making a difference on issues of poverty and justice. Christians and those who identify with no faith, however, differ considerably on how successful the work of the Church has been. Nearly three-quarters of Christians in this age group think the Church is making a difference to some extent (73%), compared to only one-third of those who claim no faith (32%). This difference in opinion could be taken as a direct reflection of the Church’s actions (or inaction) or evidence of varying interpretations or benchmarks of what it means to work for justice. Either way, this perceived absence of impact could pose barriers to belief and should be taken seriously by church leaders; more than one-quarter of 18–35-year-olds points to human suffering (28%) or conflict around the world (26%) as reasons they might doubts things of a spiritual nature.

The Mercy Journey data is based on a quantitative survey of 600 U.S. senior pastors of Protestant churches. Barna oversampled to include more perspectives of black pastors (100 respondents total). Interviews were completed online and by telephone between April 24–May 24, 2018. The rate of error is +/- 3.9 percent at the 95 percent confidence level.

Photo by Jonathan Kho on Unsplash

This article is adapted from The Connected Generation report. Order your copy today!

While, according to Barna’s categorization, evangelicals only make up about 6 percent of the U.S. population, this religious group has assumed a unique place in national discourse. As the U.S. enters another heated election year, a new Barna report shows Americans seem to increasingly view evangelicals through a political lens, which leads to mixed feelings toward this religious group. Our research has developed a pronounced portrait of this Christian minority over the years, but for this study our aim was different. We set out to understand how the general public understands evangelicals.