Only One-Third of Young Adults Feels Cared for by Others

Research in this article comes from The Connected Generation, now available for purchase!

An early and obvious theme to emerge from The Connected Generation—a Barna-World Vision partnership that surveyed 15,000 18–35-year-olds from 25 countries around the globe—is broad agreement with two statements: “Events around the world matter to me” (77% all) and “I feel connected to people around the world” (57%). The experience of connection in one’s daily life, however, isn’t a guarantee. In fact, the vast majority of young adults feels the impact of broad, global trends more than they feel loved and supported by others close to them.

Below, we’ll introduce evidence of generational tendencies toward being adrift and anxious—and how faith factors into these emotions.

Learn more about how this global study of young adults came together.

Why Do So Few Young Adults Feel Cared For?
Just one in three 18–35-year-old respondents tells Barna they often feel deeply cared for by those around them (33%) or that someone believes in them (32%). Meanwhile, nearly one in four (23%) acknowledges encountering feelings of loneliness and isolation.

Some possibly good news for people of faith: Respondents who belong to a religious tradition, seem to have stronger feelings of being in relationship with others. Respondents who identify with Christianity (19%) or other faiths (22%) are less inclined than their counterparts without a faith (31%) to say they feel isolated. This effect is emphasized when sorting religious respondents by those who value and are active in their faith (16% of practicing Christians, 15% of practicing adherents of another faith vs. 21% of non-practicing Christians, 25% of non-practicing adherents of another faith). This apparent relationship between faith and a sense of belonging is not definitive, and it should be considered that some of these religious respondents are not as willing to recognize or express negative emotions such as isolation. However, The Connected Generation research also points to key mentorships and friendships that are common among young Christians, and patterns in the data at least suggest religion may play some role in keeping loneliness at bay. 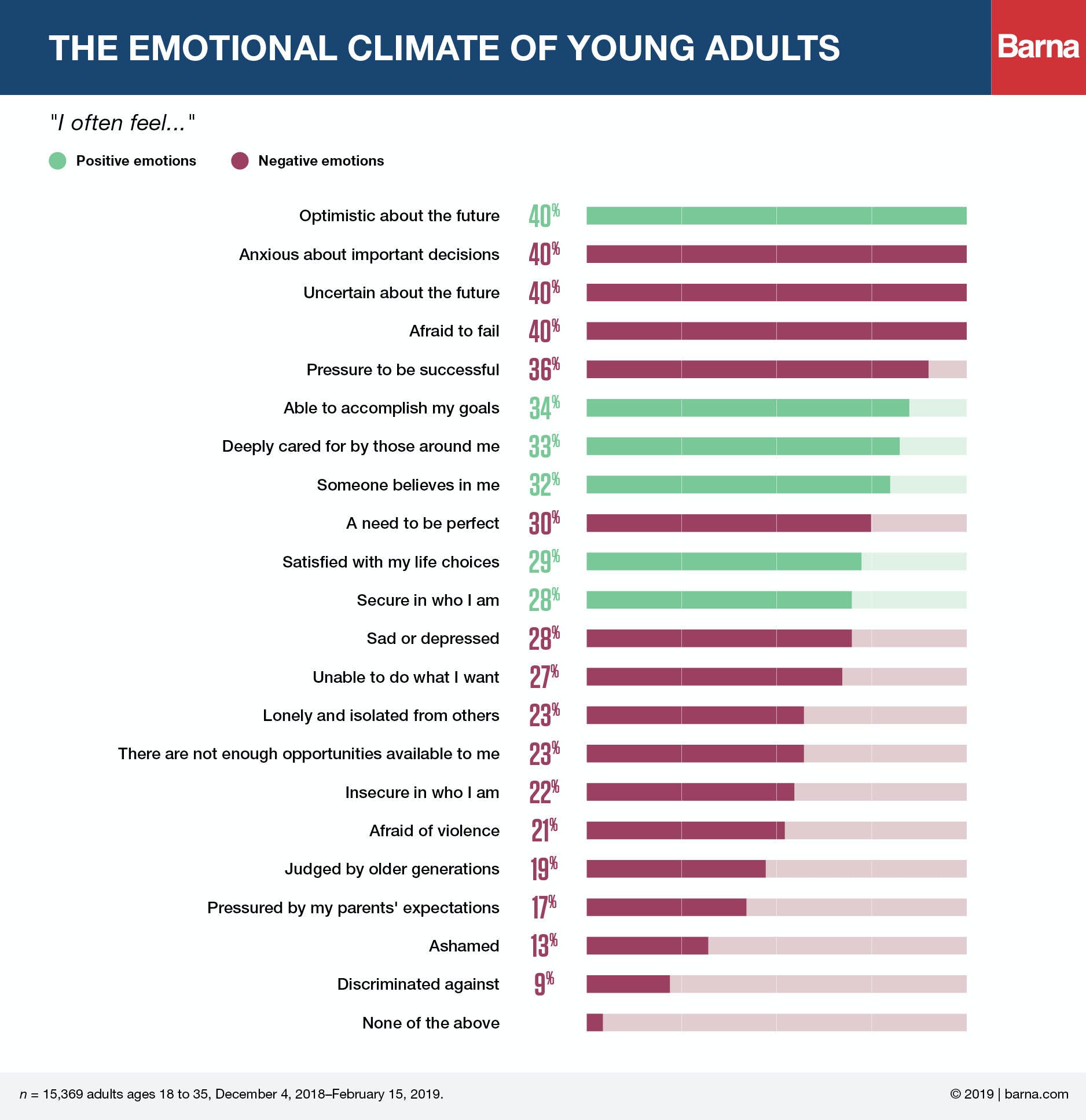 Representatives of an Age of Anxiety
There are other signs that 18–35-year-olds are not quite at ease in the world—a main one being that they tell us so. When respondents had an opportunity to provide a portrait of their emotions, the image is one of a generation gripped by worry. Anxiety about important decisions is widespread (40%), as well as uncertainty about the future (40%), a fear of failure (40%) and a pressure to be successful (36%). Though this study alone can’t speak to actual diagnoses of mental illness, nearly three in 10 overall (28%) call themselves sad or depressed. Some of these negative emotions are fairly common across the sample—general worry about big decisions, for instance, is not so exclusive to particular segments or contexts.

To recognize the prevalence or severity of deep anxiety among this connected generation, Barna grouped respondents into an “anxious” category if they say they feel at least three of the following: anxious about important decisions, sad or depressed, afraid of failure and / or insecure in who they are. Overall, one in five young adults (20%) meets this more pointed qualification. This is a group more likely to experience other negative emotions included in the survey, from a lack of opportunity to a sense of being judged by older generations. An alarming six in 10 in the group that expresses a series of anxious feelings (59%) reports a sense of isolation.

Faith communities may be facilitators of connection for troubled 18–35-year-olds—but getting young adults in the door may be a challenge. Roughly one in five respondents who experience levels of anxiety (22%) attends a place of worship weekly, compared to one-third of others (33% of those who don’t qualify as anxious). Instead, these more anxious adults are twice as likely as others to say they used to attend a place of worship, suggesting a move away from faith engagement over time. This may be because they are on the fence, at best, when it comes to the perceived value of spirituality and religion. Respondents with heightened worries experience heightened doubts; they are more likely than others to note that issues like hypocrisy (43% vs. 29%), human suffering (41% vs. 25%), global conflict (38% vs. 24%) or unanswered prayer (27% vs. 13%) are barriers to their belief in a spiritual dimension. They are less likely to express that religion is good for people (48% vs. 57% overall) or society (43% vs. 53%) and similarly hesitant to embrace the influence of the Christian Church (42% vs. 52% say it’s important to society).

Addressing the Stress of Surviving
There is no shortage of factors that may amplify a generational tendency toward feeling anxious or unsupported, explored in this study and others: Internet activity that adds to overwhelming worries and robs rest from 18–35-year-olds today. The fear of the unknown, the pressure to succeed and the weight of comparisons to others during college years, financially lean years or single years. A lack of strong roots in religious practice, which can be beneficial to one’s spiritual, relational and mental health.

It’s also important to consider that a heightened awareness of and willingness to acknowledge anxiety may be a sign of improvement, a product of years spent chipping away at taboos surrounding mental health, or indication of this generation’s bent toward finding purpose and belonging. Conversations about stress, isolation or burnout among the connected generation could represent not just crisis, but openness. Either way, it also represents an opportunity for the Church. How can church leaders support the well-being of young adults? The Connected Generation research suggests there are financial, relational and spiritual predictors of anxiety or isolation. Addressing these fraught emotions also means addressing vocation, money, community and spiritual growth.

Read more about peace for an anxiety-ridden generation.

Research in this article comes from The Connected Generation, now available for purchase!

Do Christians Consider Their Pastors to Be Friends?

Most U.S. adults hold a positive perception of pastors. In Barna’s 2017 The State of Pastors report, the data showed two out of three U.S. adults (66%) and nearly nine in 10 practicing Christians (91%) viewed pastors’ presence as a benefit in their community, while nearly the same percentage (64% U.S. adults, 87% practicing Christians) had a very positive opinion of a pastor they personally knew. In light of October being Pastor Appreciation Month and October 13th being Clergy Appreciation Day, Barna wanted to shed more light on pastoral perceptions on a personal level, outside of regular church services and events. In this article, we will learn more about those who view their pastor in a role other than church leader—and more specifically, as a friend.