We live in an increasingly secular American culture. In this new age, religion is in retreat from the public square, and traditional institutions like the church are no longer functioning with the cultural authority they once held in generations past. Today, nearly half of America is unchurched. But even though more and more Americans are abandoning the institutional church and its defined boundary markers of religious identity, many still believe in God and practice faith outside its walls.

This is the first of a two-part exploration of faith and spirituality outside the church. Let’s start with a look at the fascinating segment of the American population who, as the saying goes, “love Jesus but not the church.” (Return next week when Barna will break down the identity of the “spiritual, but not religious.”)

Traditionally Christian—with Exceptions
To get at a sense of enduring faithfulness among Christians despite a rejection of the institutional church, Barna created a metric to capture those who most neatly fit this description. It includes those who self-identify as Christian and who strongly agree that their religious faith is very important in their life, but are “dechurched”—that is, they have attended church in the past, but haven’t done so in the last six months (or more). These individuals have a sincere faith (89% have made a personal commitment to Jesus Christ that is still important to their life today), but are notably absent from church.

According to aggregate Barna tracking data, this group makes up one-tenth of the population, and it’s growing (up from 7% in 2004). The majority are women (61%), and four-fifths (80%) are between the ages of 33 and 70. That is, they are mostly Gen-Xers (36%) and Boomers (44%), not Millennials (14%) or Elders (6%). Though Millennials are the least churched generation, they are also the least likely to either identify as Christian or say faith is very important to their life, explaining their underrepresentation among this group. Elders are underrepresented for the opposite reason—they are the generation most likely to attend church regularly. 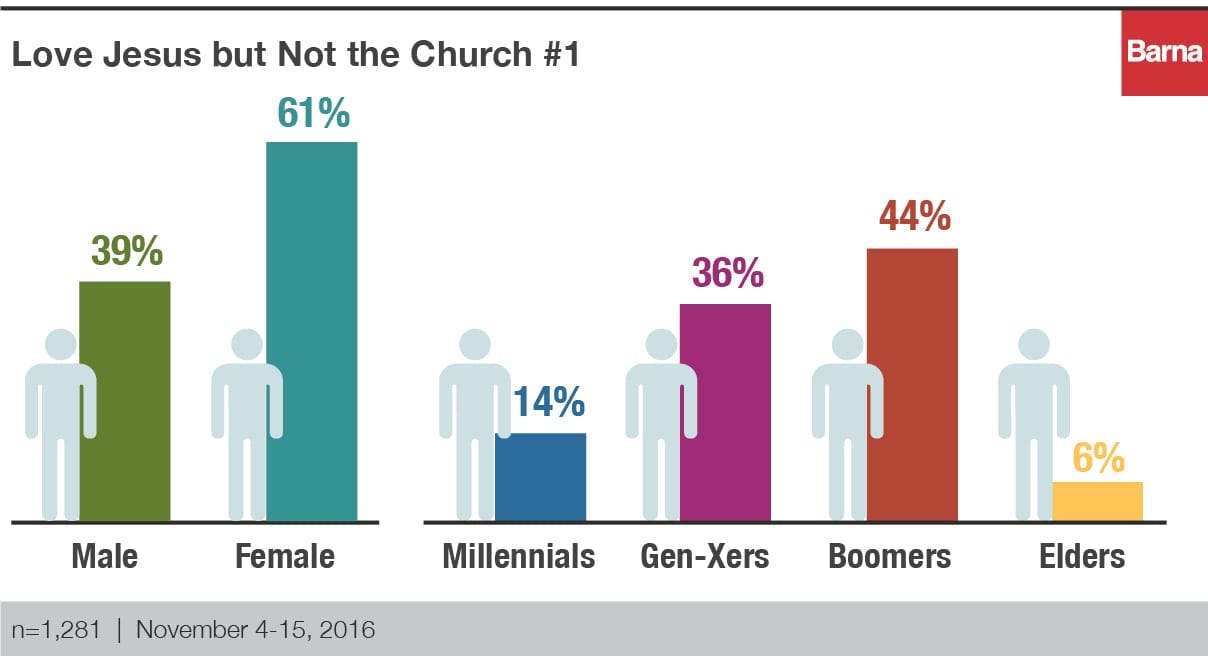 This group also appears to be mostly white (63%) and concentrated in the South (33%), Midwest (30%) and West (25%), with very few hailing from the Northeast (13%)—a region typically home to the most post-Christian cities in America. The fact that they are just as likely to identify as Democrat (30%) than Republican (25%) is interesting, particularly for Christians and those in the South and Midwest, who typically are disproportionately Republican. It’s possible that left-leaning people of faith are encountering some level of political discord with their church, which may have prompted an exit.

Left-leaning people of faith may encounter political discord with their church, prompting an exit. Click To Tweet

When it comes to beliefs about God, those who “love Jesus but not the church” are orthodox. Click To Tweet 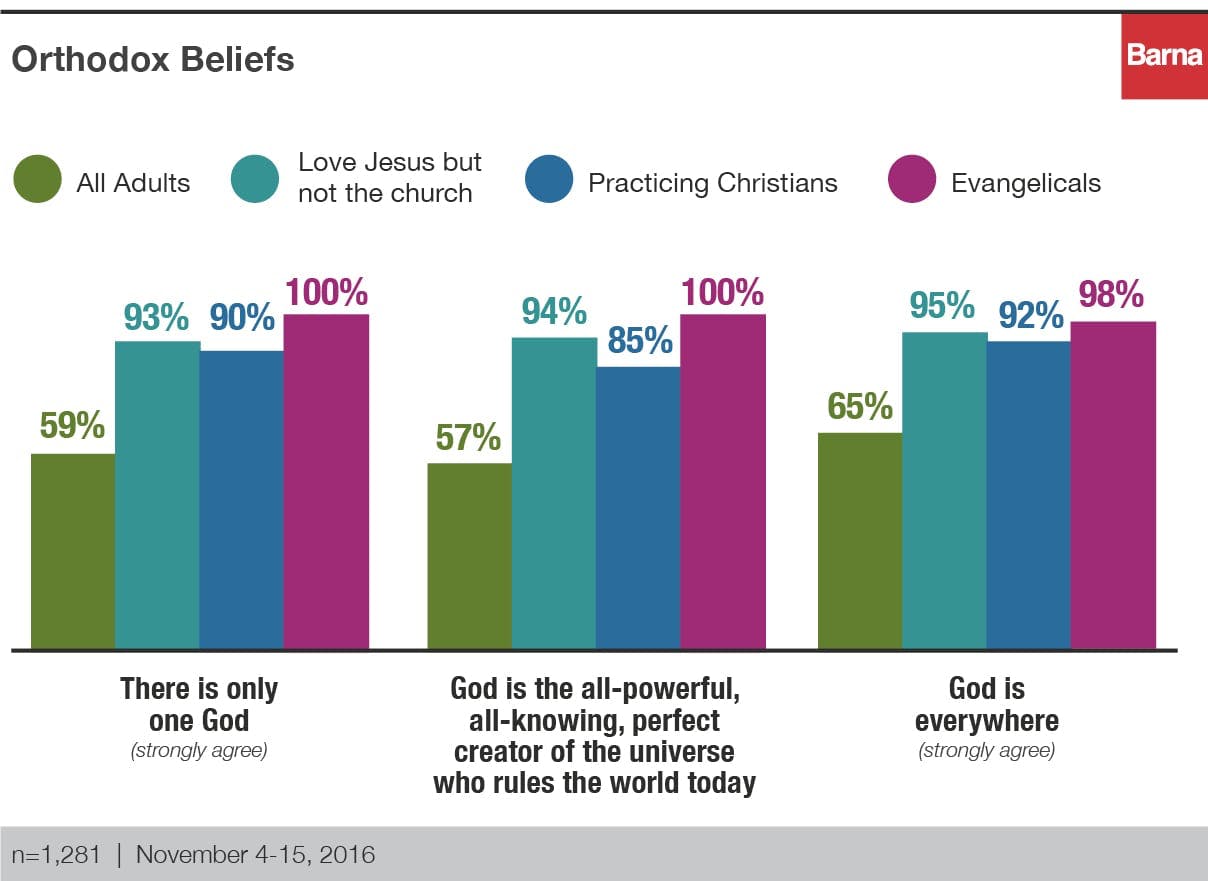 Positive, if Amorphous, Views of Religion
Despite their apparent discomfort with the church, this group still maintains a very positive view of religion. When asked whether they believe religion is mostly harmful, their response once again stood out from the general population, and aligned with their church-going counterparts (71% strongly disagree, compared to 71% among practicing Christians and 48% among U.S adults). 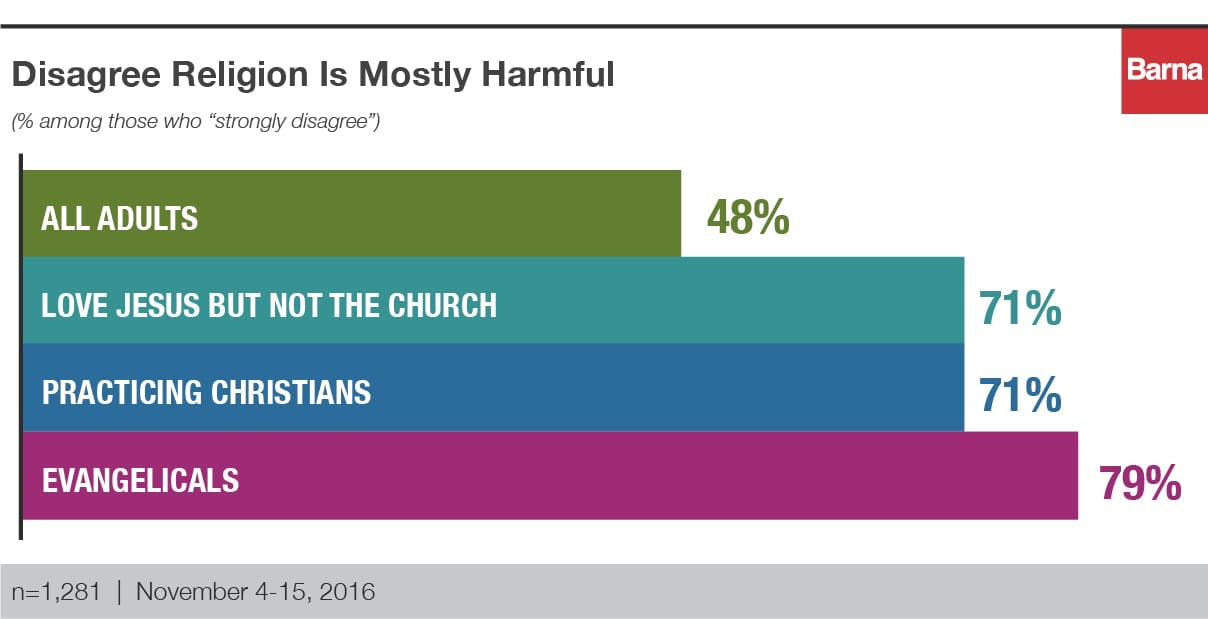 But the story changes slightly when it comes to the distinctiveness of Christianity: Just over half (55%) disagree (strongly and somewhat) that all religions basically teach the same thing, much closer to the general population (51%) than practicing Christians (68%), and even further from evangelicals (86%). In the absence of a rigid religious identity provided by the authority of the church, this group appears to be more affirming of the claims of other religions and open to finding and identifying common ground. 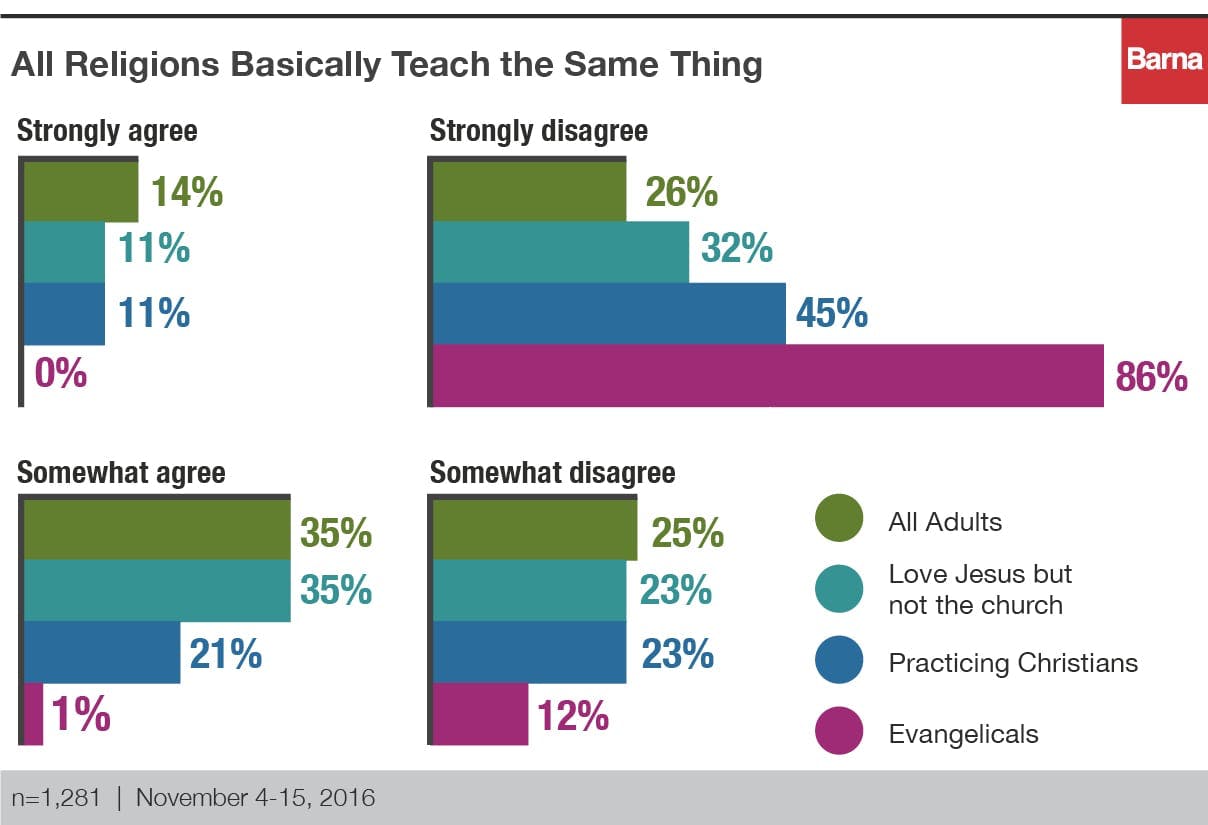 Privately Spiritual
Due to their enduring religious affiliation and overtly religious faith, this group falls outside of the characterization of “spiritual but not religious” folks—the topic of next week’s article. But one thing they do share is a sense of spirituality. Slightly fewer than nine in 10 (89%) identify as “spiritual,” on par with practicing Christians (90%), and far exceeding the national average (65%). 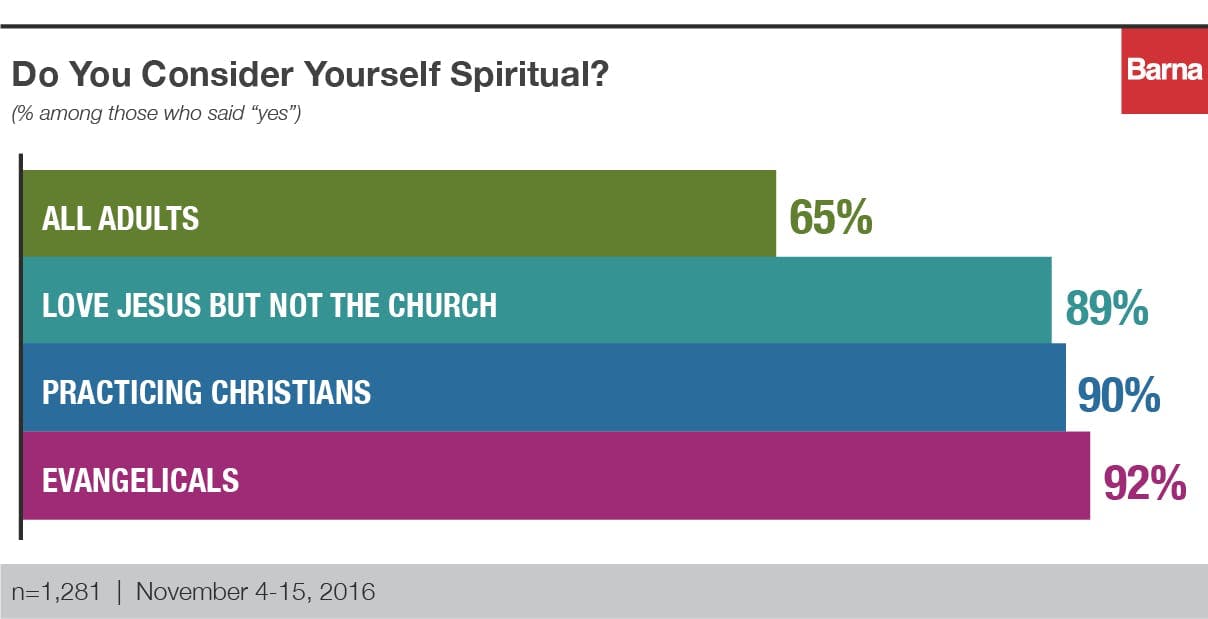 But unlike practicing Christians and evangelicals, this spirituality is deeply personal—even private—with many preferring to keep spiritual matters to themselves: only two in five (18%) say they talk with their friends about spiritual matters often. This is less than half as much as practicing Christians (41%), and almost four times less than evangelicals (67%), who are known for evangelizing and sharing their faith. When asked specifically about evangelizing—whether they personally have a responsibility to tell others about their religious beliefs—the differences are even more striking. Fewer than three in 10 of the “love Jesus but not the church” group agrees strongly that they have a responsibility to proselytize (28%), compared to more than half of practicing Christians (56%) and all of Evangelicals (100%). So, while “spiritual” topics may often or sometimes come up, the actual act of trying to convert someone is a low priority for this group.

This spirituality is deeply personal, with many preferring to keep spiritual matters to themselves. Click To Tweet 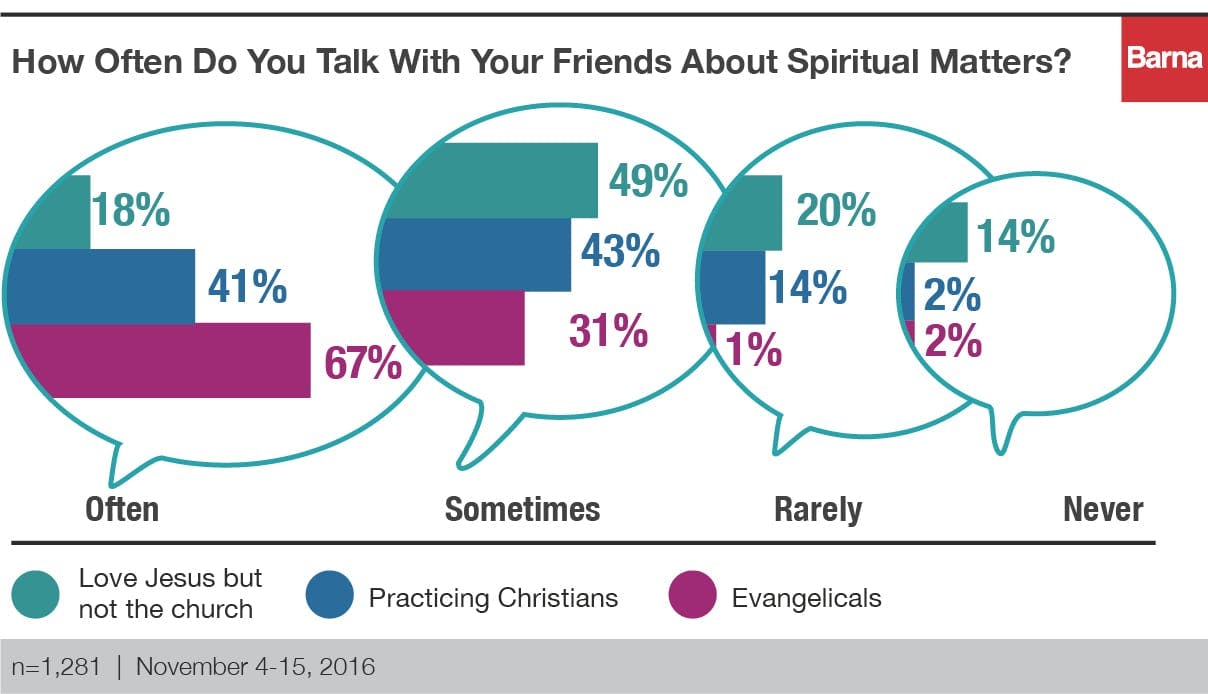 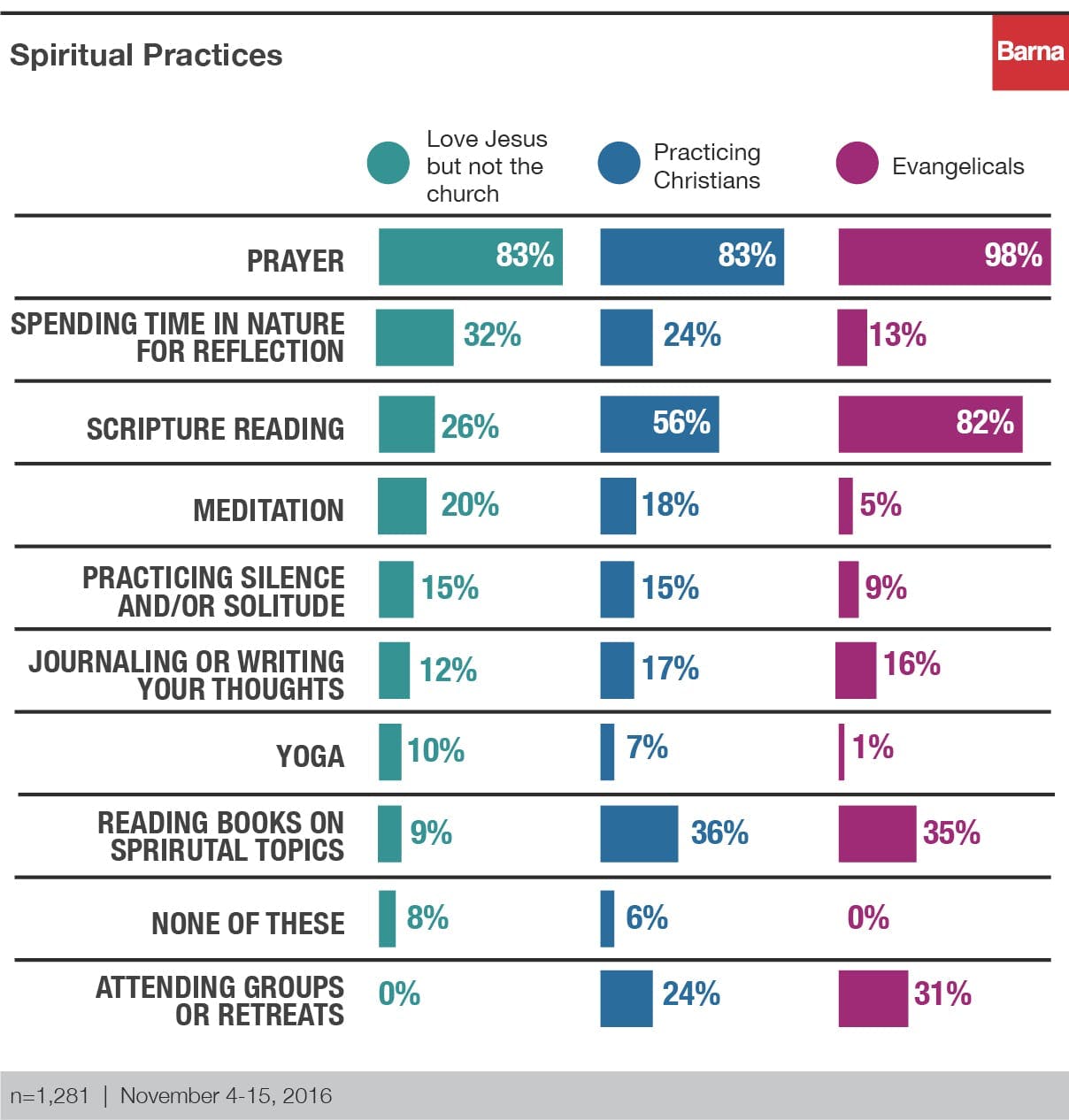 What the Research Means
We will explore this topic of faith outside the church much more in the coming weeks, but one thing that’s most worth noting among this group of people who “love Jesus but not the church” is their continued commitment to faith. “This group represents an important and growing avenue of ministry for churches,” says Roxanne Stone, editor in chief of Barna Group. “Particularly if you live in a more churched area of the country, it’s more than likely you have a significant number of these disaffected Christians in your neighborhoods. They still love Jesus, still believe in Scripture and most of the tenets of their Christian faith. But they have lost faith in the church. While many people in this group may be suffering from church wounds, we also know from past research that Christians who do not attend church say it’s primarily not out of wounding, but because they can find God elsewhere or that church is not personally relevant to them. The critical message that churches need to offer this group is a reason for churches to exist at all. What is it that the church can offer their faith that they can’t get on their own? Churches need to be able to say to these people—and to answer for themselves—that there is a unique way you can find God only in church. And that faith does not survive or thrive in solitude.”

About the Research
Interviews with U.S. adults included 1,281 web-based surveys conducted among a representative sample of adults over the age of 18 in each of the 50 United States. The survey was conducted November 4-15, 2016. The sampling error for this study is plus or minus 2.9 percentage points, at the 95% confidence level. Minimal statistical weighting was used to calibrate the sample to known population percentages in relation to demographic variables.

The tug-of-war between a parent’s protective instincts and their desire to raise fearless kids is felt in youth ministries. In partnership with Youth Specialties and YouthWorks, Barna conducted a major study on the state of youth ministry in the United States, looking at the expectations of pastors, youth leaders and parents.