A recent Barna study shows it is very important to engaged Christian parents that their child develops a lasting faith. If the goal is to impart a vibrant, lasting faith to the next generation, the current state of affairs is not promising: Christianity has less of a hold on Gen Z than on any previous age group. Fewer U.S. teens than adults believe core theological tenets of the Christian faith—and teens who do make orthodox faith claims are not quite as sure about them as adults. Most of us form our values and assumptions before the age of 20, so it’s vitally important to reassess our discipleship priorities and methods—and adjust as necessary. In this excerpt from Barna’s major study of Generation Z, conducted in partnership with Impact 360 Institute, we take a look at the discipleship interactions that today’s teens have with their parents and youth pastors.

Parents Want a Lasting Faith for Their Children
More than nine out of 10 engaged Christian parents (those who identify as Christian, regularly attend church and have orthodox beliefs) say it is important that their child “is equipped to explain the Christian faith” and is “engaged in service”—likely as elements of the overall goal of strong adult faith. 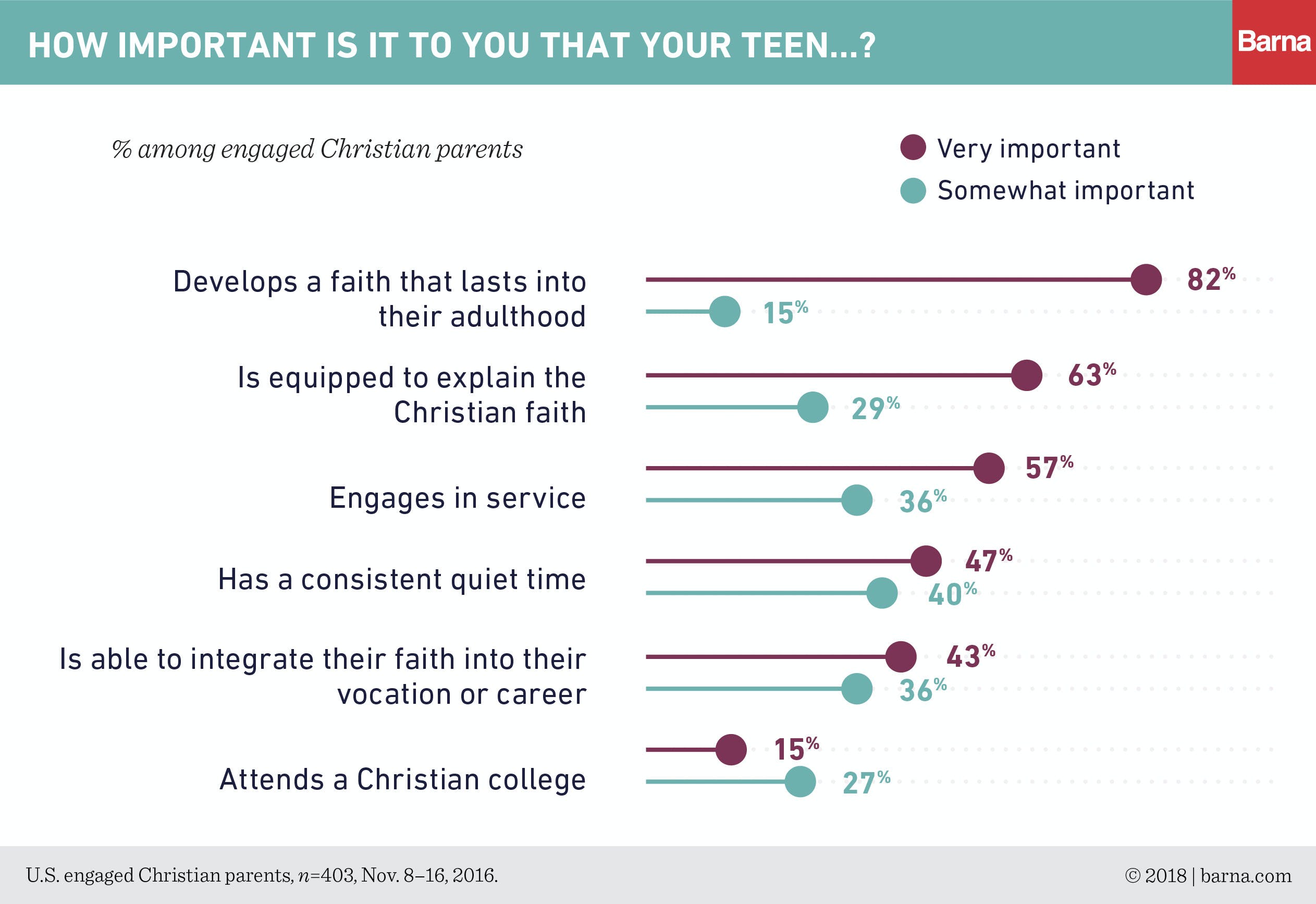 Who owns the responsibility to develop their teen’s faith? According to engaged Christian parents, they do. Three out of five say that they, the parents, are primarily responsible (59%) and more than one-third says that it’s mostly them, with the help of church leaders (36%). They approach this in a variety of ways, including attending church together (89%), praying together (59%), reading / discussing the Bible together (45%) and volunteering / serving with a ministry together (44%).

Three out of five engaged Christians parents feel primarily responsible for developing their teen’s faith. 36 percent says that it’s mostly them, with the help of church leaders. Click To Tweet

Christian Gen Z Are Open with Their Parents
Four out of five engaged Christian teens agree “I can share my honest questions, struggles and doubts with my parents” (79%), far more than any other faith segment. According to a majority of parents, these conversations include Christian perspectives on current events and biblical perspectives on sexuality and marriage. Fewer than half, however, have ever discussed (among other topics) healthy media consumption or the relationship between science and the Bible—two subjects certainly at daily issue in their teens’ lives. Additionally, less than one-quarter of engaged parents has talked about integrating faith and career; even fewer have talked with their teen about discerning God’s will in their choice of college. These are areas of utmost concern to many teenagers, especially older teens who are thinking deeply about planning for their future. Understanding how their plans fit with God’s purpose is a big part of keeping a faith that lasts.

But parents, like Gen Z, don’t all feel comfortable having conversations about difficult topics. Surprisingly, one in five says they do not feel prepared to address “tough” questions about Christianity, God or the Bible. One in seven feels unprepared to talk about the foundational beliefs of Christianity. And about the same number struggles to address spiritual and moral relativism—which, as we’ve seen, is a potent challenge to Gen Z faith. 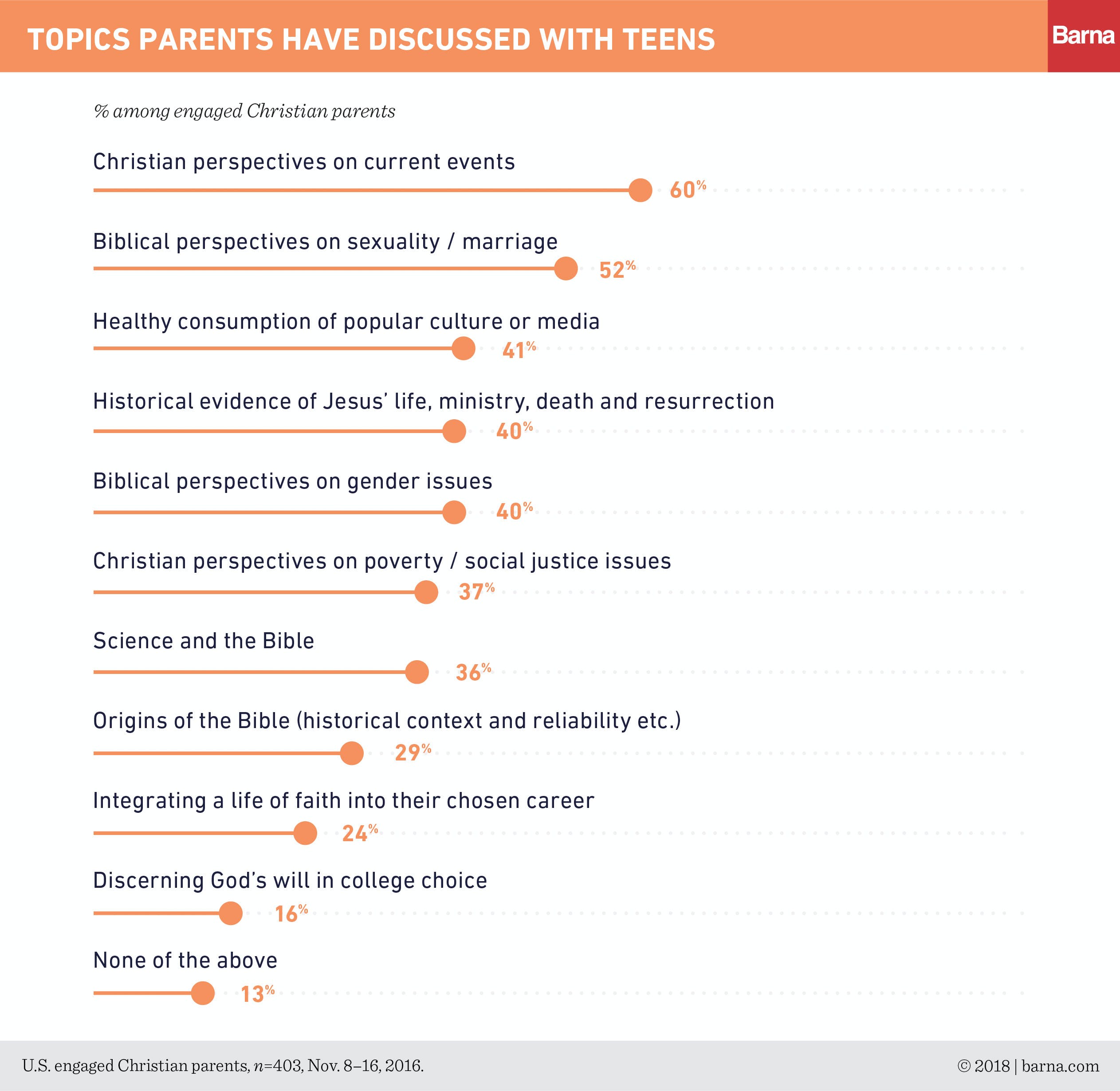 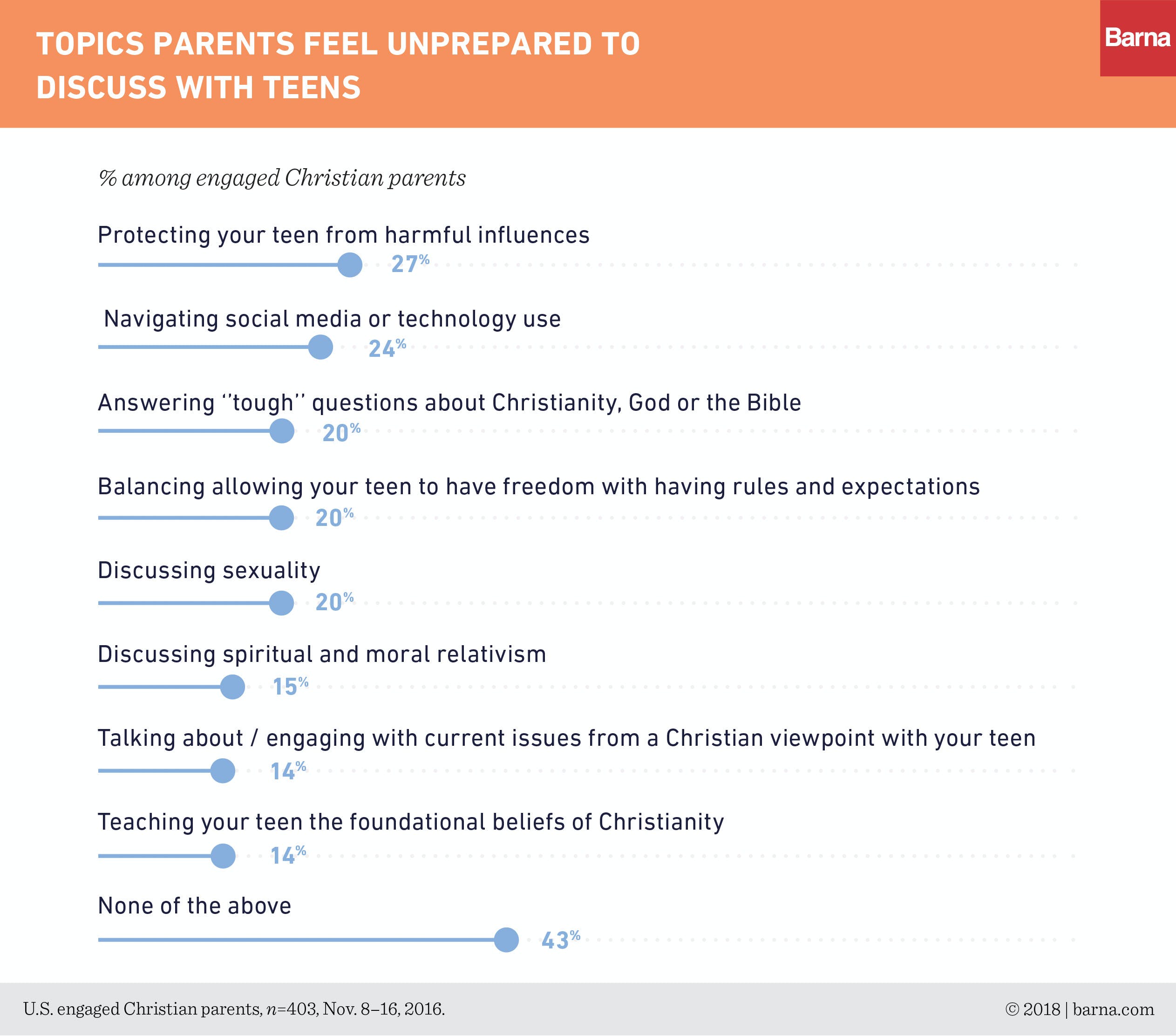 Unfortunately, some youth programs also appear to have a few weaknesses in common, according to parents. These include helping teens determine their career / vocation (34%), equipping them to talk about their faith with people who do not share their beliefs (16%) and facilitating a consistent small group / Bible study for their teen (14%).

But, according to youth pastors, one of the most significant factors affecting teens’ experience of youth group is actually their parents’ faith engagement (or lack thereof). The most common struggle they name is “parents not prioritizing their teen’s spiritual growth.” Though, presumably, youth pastors are not talking about engaged Christian parents here. Nearly three in 10 also admit that “balancing the needs of unchurched teens with growing those who do have faith” is a struggle, and one in 11 says “too much time dealing with practical life topics and not enough time talking about foundational beliefs” is a problem for their group. So at least some youth pastors are aware that the youth program is not ideal for in-depth discipleship with teens who already have a faith-engaged family.

The most common struggle that youth pastors report in their ministry is parents not prioritizing Gen Z’s spiritual growth. Click To Tweet 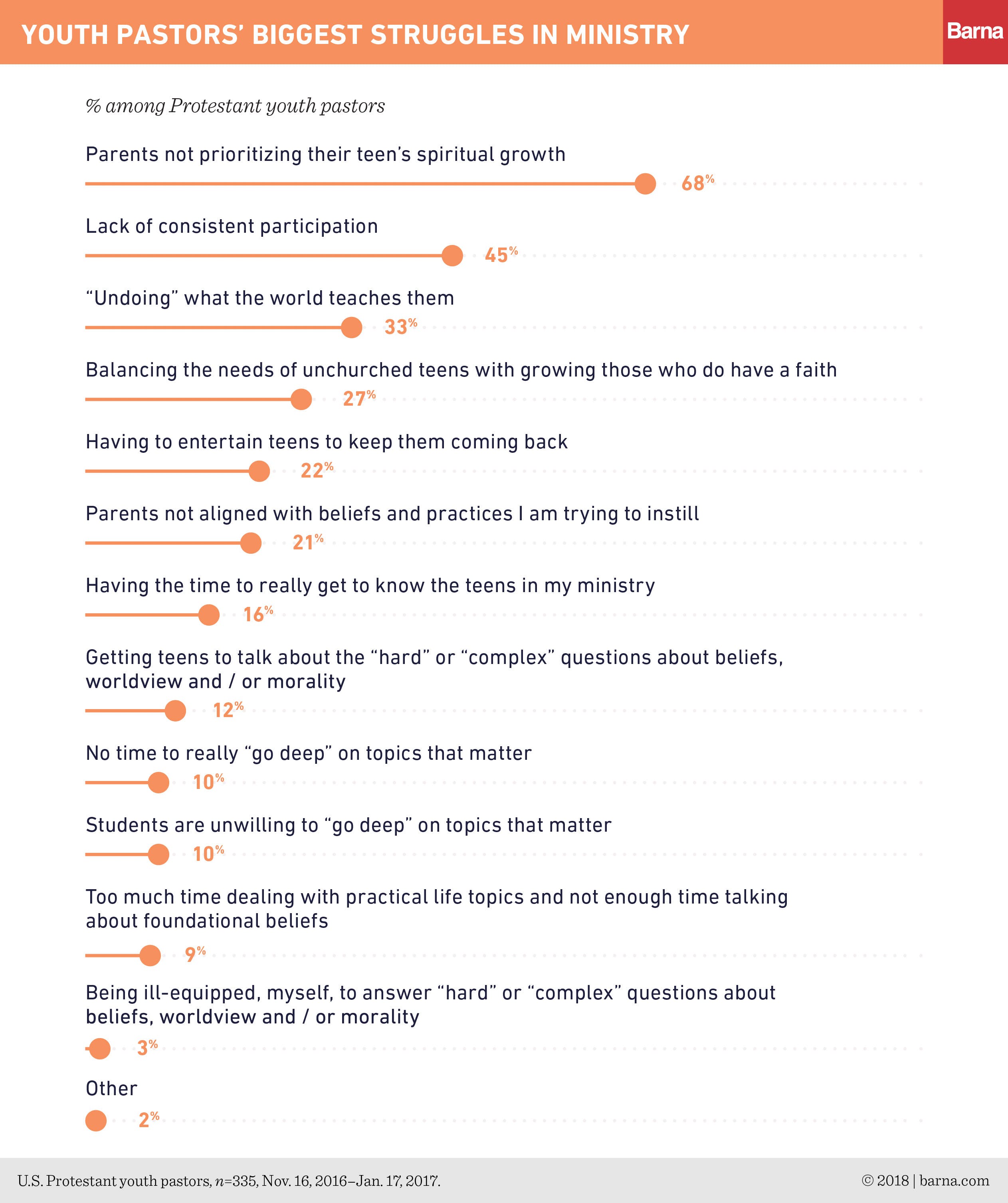 When we look at the topics youth pastors have covered during the past year (prayer and devotional habits; basic theology; biblical literacy; sexuality, dating and marriage), it’s clear that most are trying to plant seeds of ideas and habits in teens that will grow into mature faith. Comparing youth pastors’ discussion topics with engaged Christian parents’, youth pastors may actually be more likely to have talked with teens about most subjects on the list. This is partly due to the nature of their different roles: It is literally a youth pastor’s job to talk about these things.

In addition, Barna asked youth pastors about four broader topics that are perennially significant for Christians in any generation and of particular importance for Gen Z, given the cultural challenges they face. Nearly all think they are at least somewhat prepared to address each of these specific worldview topics with teens, particularly the evidence for Jesus and the origins of the Bible. 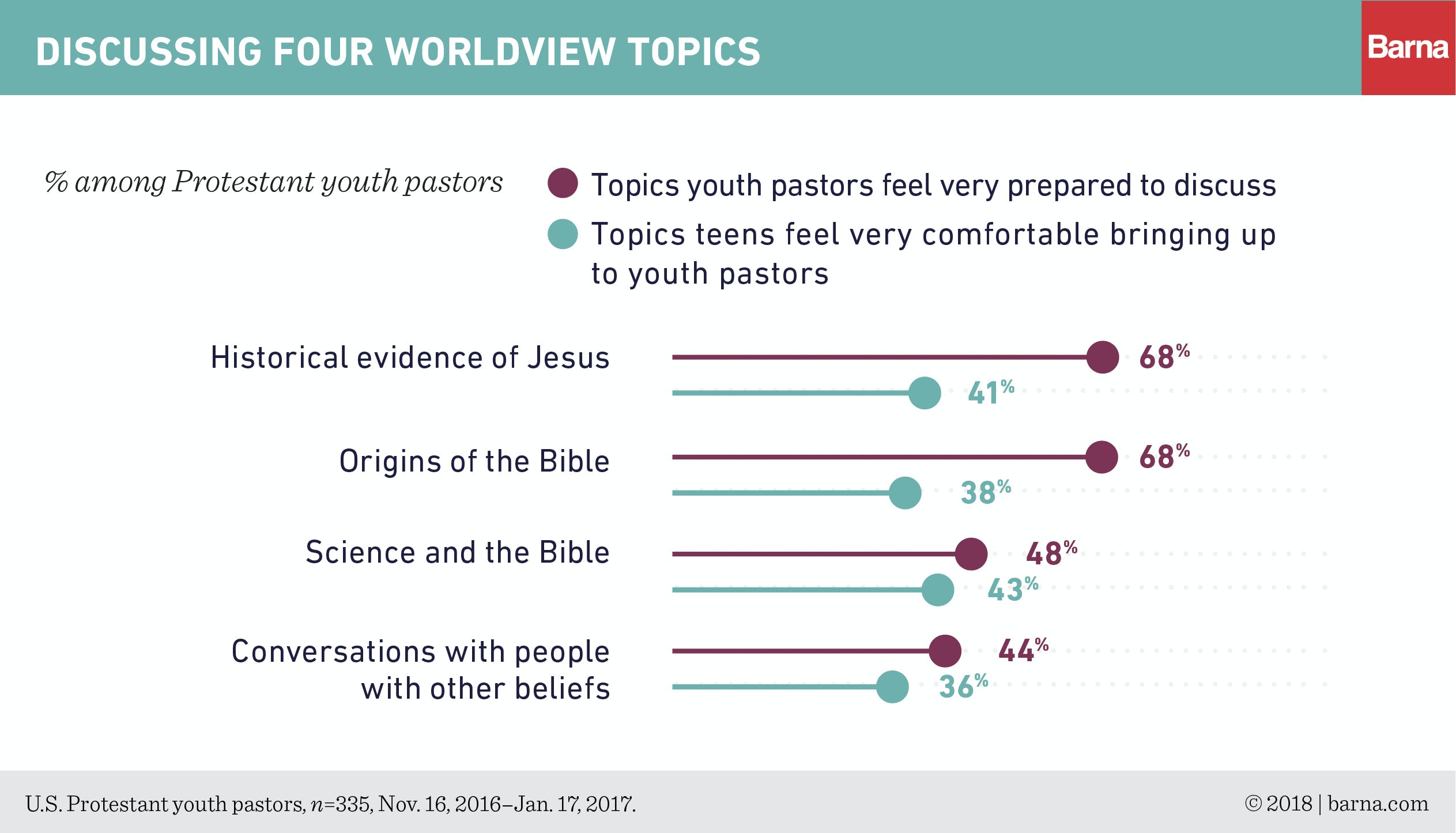 Considering the climate in which Gen Z is coming of age, all youth pastors and Christian parents need to prepare for robust conversations on these and other topics relating to biblical worldview. Teens may not be entirely at ease talking about these subjects, but that doesn’t make them any less urgent.

Photo by Timothy Choy on Unsplash.

Barna conducted its annual State of the Bible survey to examine behaviors and beliefs about the Bible among U.S. adults. The results show that despite the shifting cultural trends, Americans still read the Word and it remains a powerful, transformative tool in their life.