What Is the Church’s Role in Racial Reconciliation?

You are reading a free research sample of Where Do We Go from Here?

This August marks 400 years since African slaves were brought to the United States and traded to European settlers in exchange for money and food. Many historians note the summer of 1619 as the beginning of slavery in America, and as our country nears the anniversary of this horrific event, many are taking time to reflect on the history of racial injustice in America and their responsibility in healing the wounds of inequality that have been inflicted on black Americans over the last four centuries.

For a recent study on race and equality in America, conducted in partnership with The Reimagine Group, Barna set out to contribute to a broader understanding of race relations in our present moment and equip church leaders with context for challenging conversations. This new report, titled Where Do We Go from Here?, represents the first of several new Barna efforts to study race and the Church and assesses perceptions of the nation’s reputation and what practicing Christians—across racial, denominational and political fault lines—feel should be done to repair the damage.

In a previous article, we reported on data presented in Where Do We Go from Here? that explored practicing Christians’ responses to the history of slavery and how it’s currently affecting the U.S. While not all practicing Christians agree that the ripple effects of slavery can still be felt by black Americans today, those who do have some ideas of next steps for addressing this injustice, specifically where the Church is involved.

Christians Disagree on the Problem & the Solution
A previous Barna study showed a gap between ethnic groups on whether racism is a problem of the past; 59 percent of black U.S. adults and 39 percent of white adults strongly disagreed. There was also confusion on whether the Church specifically contributed to that problem. Overall, six in 10 U.S. adults somewhat or strongly disagreed (62%)—black Americans, however, were more likely than white Americans to view Christian churches as complicit (17% vs. 9%).

The current study for Where Do We Go from Here? went a step further, asking respondents how the Church should respond in light of our nation’s 400-year history of injustices against black people. Though responses were fairly distributed, and multiple responses were allowed, 28 percent say “there’s nothing the Church should do.” A full third of white practicing Christians (33%) selects this option, double the percentage of black practicing Christians who feel this way (15%). Instead, the plurality of black respondents (33%) has a clear next step in mind: repairing the damage. 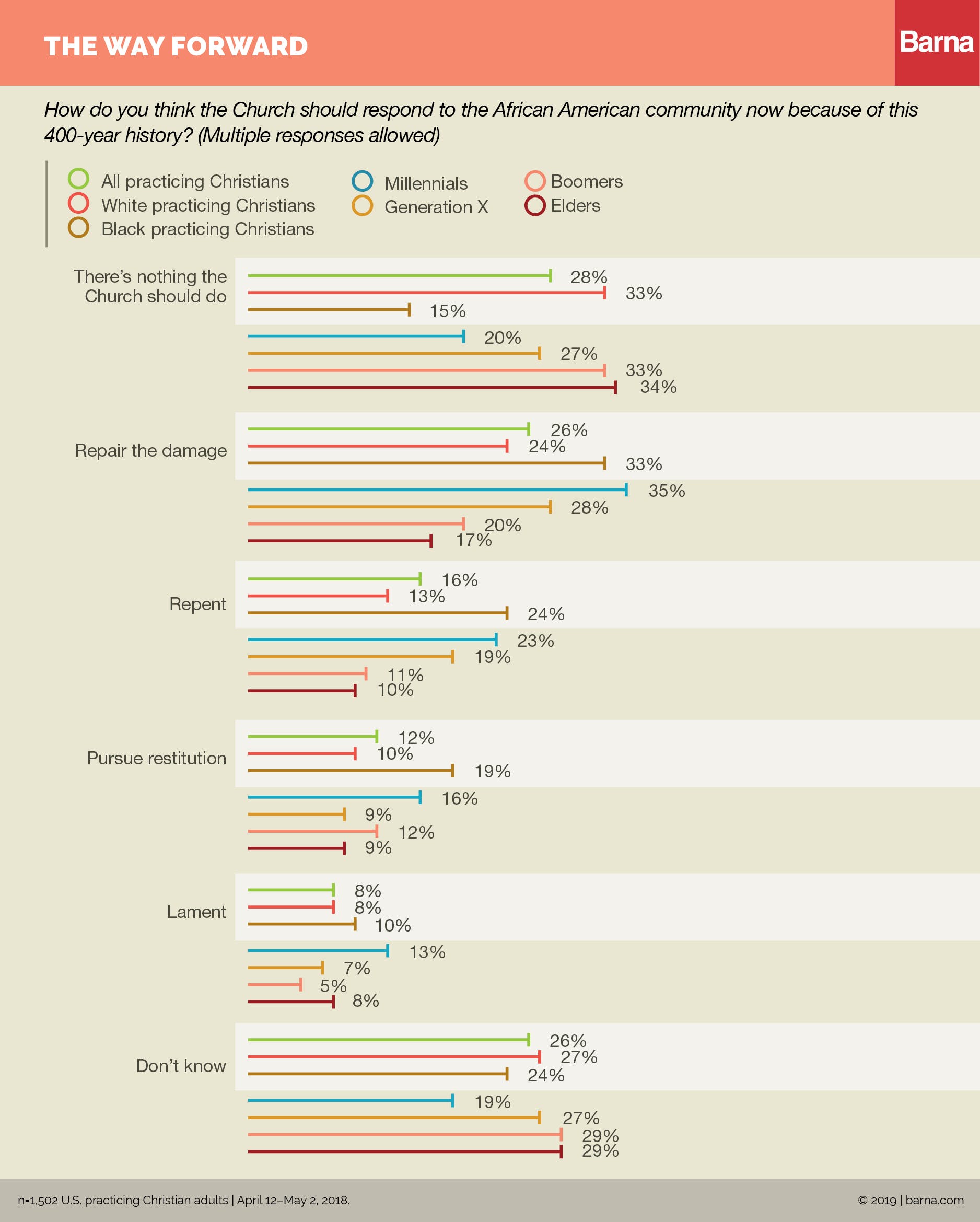 Answers such as repentance (16%), restitution (12%) and lament (8%) are less popular. A surprising number of respondents—across demographics—says they “don’t know” how the Church should respond to historical mistreatment of black Americans (26% overall). This could represent confusion over the specific options provided, which range from the symbolic to the material, or it could simply be a way of saying respondents are unsure what should—or even what can—be done by churches to help with racial reconciliation.

Data show that older practicing Christians are more likely to say nothing is required of the Church in racial reconciliation (34% Elders, 33% Boomers vs. 27% Gen X, 20% Millennials), while younger generations see a path toward repairing the damage (35% Millennials, 28% Gen X vs. 20% Boomers, 17% Elders) and repenting (23% Millennials, 19% Gen X vs. 11% Boomers, 10% Elders). The younger the Christian, the more they want the Church to do.

(Most) Pastors are Willing to Play a Part
Pastors appear more emphatic than practicing Christians not only about the reality of racial inequality, but also about the Church’s role in addressing it. For instance, pastors are more likely to observe frequent hardships for non-white Americans and two-thirds of pastors (65%) agree that the effects of slavery continue to be felt today, a conviction held by half of practicing Christians (50%).

Thus, according to pastors, the Church needs to actively respond to the black community in the U.S., given the tragic history of slavery. Alongside the primary goal of repairing the damage done (45%), they are drawn to spiritual solutions such as repenting for (36%) and lamenting (35%) historical racism. On all counts, pastors are ahead of practicing Christians in choosing these as next steps for the Church. 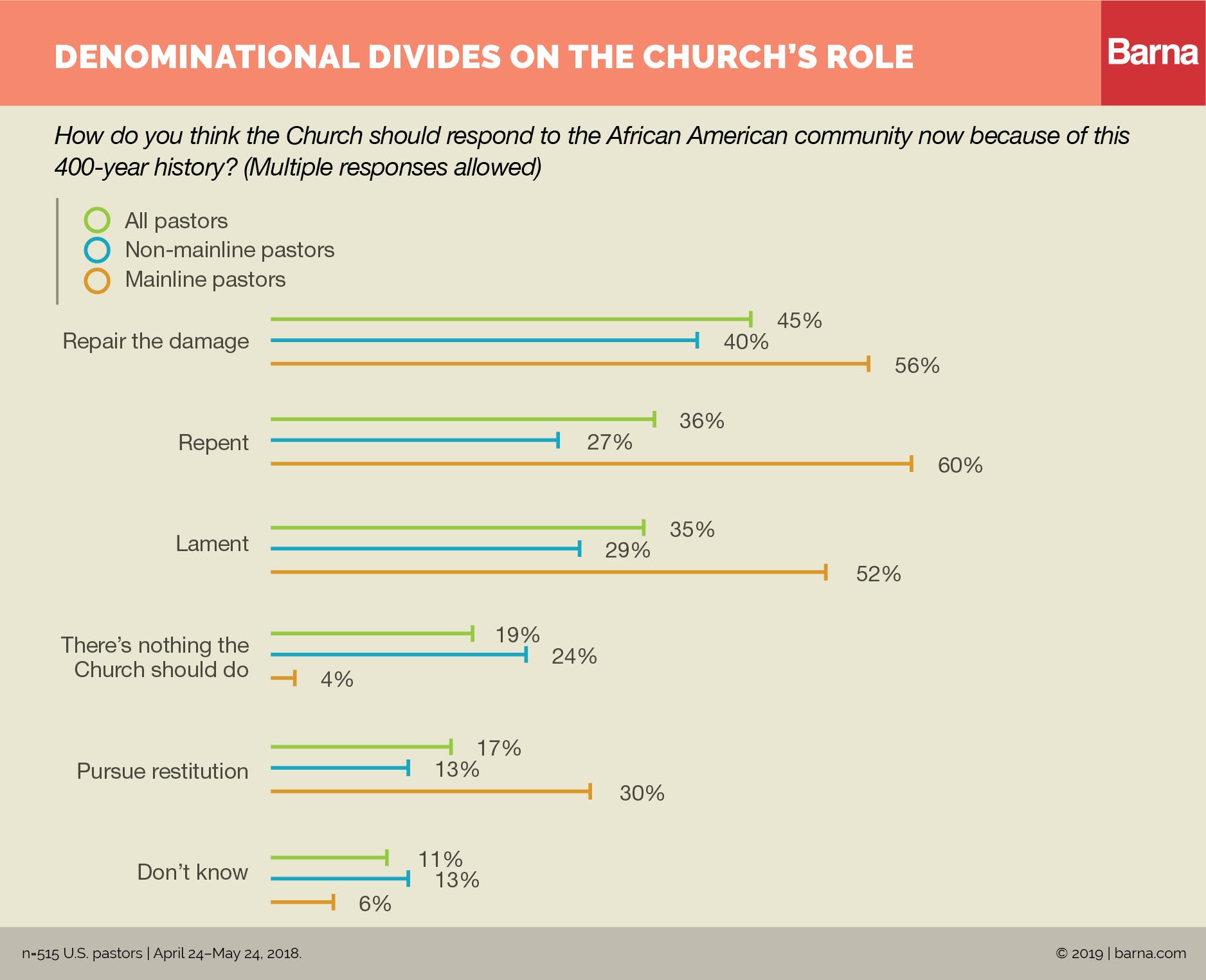 Curiously, although a plurality of black pastors (45%) thinks churches can play a part in repairing race relations, nearly four in 10 (39%) say there is nothing the Church should do, something only one-fifth of white pastors (19%) believes. It’s possible that black pastors, thinking of their own ministry, feel the impetus should be on white leaders and churches to pursue amends or reconciliation. This mindset might also be behind black pastors being less inspired toward lament (15%), which 37 percent of white pastors say should be the Church’s response.

Faith Leaders Comment on the Findings
Alongside new data, analysis and infographics from Barna, Where Do We Go from Here? features insights from a range of scholars and faith leaders. Below are some relevant excerpts from that panel’s commentary, in light of the findings mentioned above:

“What binds mercy and justice is love. … So for mercy and justice to be effective and genuinely reflect God’s own character, they have to be rooted in love. Needless to say, there can be no racial reconciliation if love is absent; otherwise it is just racial tolerance.” —Nicola A. Menzie, Founder of Faithfully Magazine

“Only the gospel enables us to forgive those who wound us and to ask others for forgiveness when we wound them. The power to practice unconditional love can’t be willed into existence. Racial reconciliation will bring suffering, so we need to be prepared for that. Our capacity to engage in racial reconciliation ministry depends on our capacity for suffering.” —Maria Garriott, Intercultural Development Consultant for Parakeleo

“Acknowledgement is vital to the forgiveness process. … Acknowledgement allows a person to see and absorb what has happened so that they are ready for grace to be applied. Even before God forgives our sin, there has to be an acknowledgement. We can’t be afraid of hard, uncomfortable conversations. Navigate through it. The destination for Christians has to be forgiveness, but not without acknowledgment.” — Mark Strong, Senior Pastor of Life Change Church

“This generation needs to be reawakened to a part of worship that has historically been an important part of the black church: lament, including wailing and weeping and ‘the moaner’s bench.’ Romans 12 talks about presenting our bodies as living sacrifices and goes on to say one of the ways we do that in community is by weeping with those who weep. … To experience real change, we must learn to lament together.” —Eric Mason, Founder & Pastor of Epiphany Fellowship Church

“If pastors try to keep forgiveness, repentance and lament as only disembodied ‘spiritual’ things, they shortchange the gospel. The gospel is embodied and manifest in all aspects of life. It’s personal. It’s social. It’s cultural. It’s economic. It’s political.” —Nikki Toyama-Szeto, Executive Director of Evangelicals for Social Action / The Side Center

“[Churches] can use their space Monday through Saturday to invest in civic education and action through learning sessions and public forums, volunteer hours and small groups focused on some of these issues. It is important to connect the ideas of justice, mercy and compassion to challenges we face today—not just in our personal lives, but in our public lives.” —Michael Wear, Chief Strategist & Member of the Executive Leadership Team for the AND Campaign

Photo by Gratisography on Pexels.

You are reading a free research sample of Where Do We Go from Here?

A Snapshot of Faith Practice Across Age Groups

How often do Christians attend church? What do they believe about God? Do they regularly open their Bibles? Drawing from FaithView, Barna’s new online database for city, state and national spiritual profiles, let’s take a fresh look at one of the questions we often hear as religion researchers: How do core metrics of faith look by generation, as Christians progress through age and stage of life?