When was the last time you had a conversation about God? For most people, the unfortunate and surprising answer to that question is not very often. Spiritual conversations are exceedingly rare for most Americans, and even for Christians, who are at best reluctant to have them.

In 1993, Barna partnered with Lutheran Hour Ministries to research reasons why people did and did not engage in intentional outreach. A lot has changed since that initial study, so 25 years later we asked follow-up questions to see if talk of faith has become labored in a culture that is more digital, secular and contested than ever. The resulting report, Spiritual Conversations in the Digital Age, is now available for purchase.

Sharing Faith: Then and Now
A growing number of Christians don’t see sharing the good news as a personal responsibility. Just 10 percent of Christians in 1993 who had shared about their faith agreed with the statement “converting people to Christianity is the job of the local church”—as opposed to the job of an individual (i.e., themselves). Twenty-five years later, three in 10 Christians who have had a conversation about faith say evangelism is the local church’s responsibility (29%), a nearly threefold increase. This jump could be the result of many factors, including poor ecclesiology (believing “the local church” is somehow separate from the people who are a part of it) or personal and cultural barriers to sharing faith. Yet the most dramatic divergence over time is on the statement, “Every Christian has a responsibility to share their faith.” In 1993, nine out of 10 Christians who had shared their faith agreed (89%). Today, just two-thirds say so (64%)—a 25-point drop.

In 1993, 89% of Christians who had shared their faith agreed this is a responsibility of every Christian. Today, just 64% say so—a 25-point drop. Click To Tweet

What and When They Share
From 1993 to today, the content and approaches of faith conversations have also changed. Given the  popularity of evangelism “programs” or “strategies” in decades past, researchers were surprised that Christians today who have talked about their faith are more likely than those in 1993 to say they use the same basic entryways and content each time they engage in a conversation about faith (44% vs. 33%). The most common approaches, a majority says, are asking questions about the other person’s beliefs and experiences (70%) and sharing their faith in the way they live rather than by speaking about it (65%). These were common among Christians in 1993 as well, as the chart shows, but a majority of Christians 25 years ago also reported emphasizing the beneficial aspects of accepting Jesus (78%)—a strategy that today is less common (50%). Also less popular now is quoting passages from the Bible (59% in 1993 vs. 37% today) and challenging the other person to defend their beliefs (43% vs. 24%). 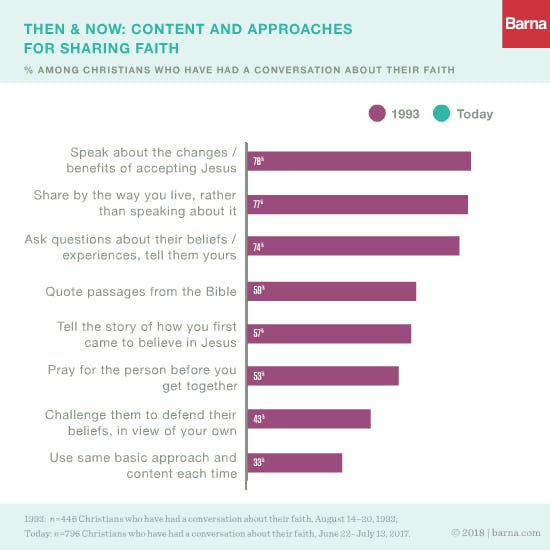 In addition, most conversations today (61%), as in 1993 (75%), happen unexpectedly. Yet compared to 25 years ago, Christians today are more likely to say they are proactive about looking for or trying to create faith-sharing opportunities with non-Christians (19% vs. 11% in 1993). 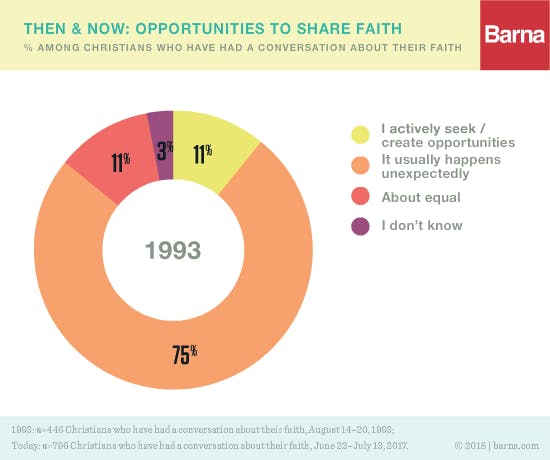 Barriers to Faith Sharing
Christians today, more than 25 years ago, perceive social barriers to sharing their faith. They are more likely to agree that faith-sharing is only effective when they already have a relationship with the other person (47% vs. 37% in 1993) and to admit they would avoid a spiritual conversation if they knew their non-Christian friend would reject them (44% vs. 33%). They are also more likely than Christians in 1993 to say they are unsure whether “most non-Christians have no interest in hearing about Jesus” (28% vs. 5%). 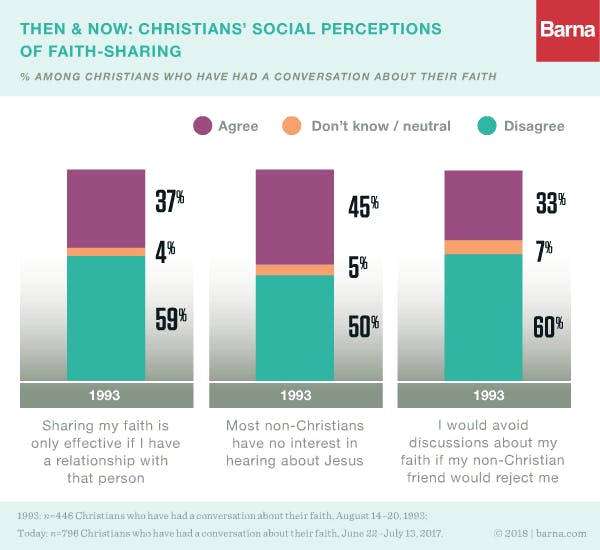 When it comes to specific conditions that make talking about religion unacceptable, non-Christians are again the most cautious. Six out of 10 say a person must not share if their religious beliefs are “disrespectful or judgmental” (61%). Beliefs perceived as disrespectful or judgmental are the top reason sharing views on religion would be uncalled for: about half of all adults agree (48%). This is the case for all faith categories, including Christians, but they are less likely than non-Christians to say so. Practicing Christians seem to be more concerned than other groups about what’s going on inside the person who is sharing; 41 percent say talking about faith in anger makes sharing unacceptable. Other common barriers are when “someone has asked you not to” and “if the timing is inconsiderate.” 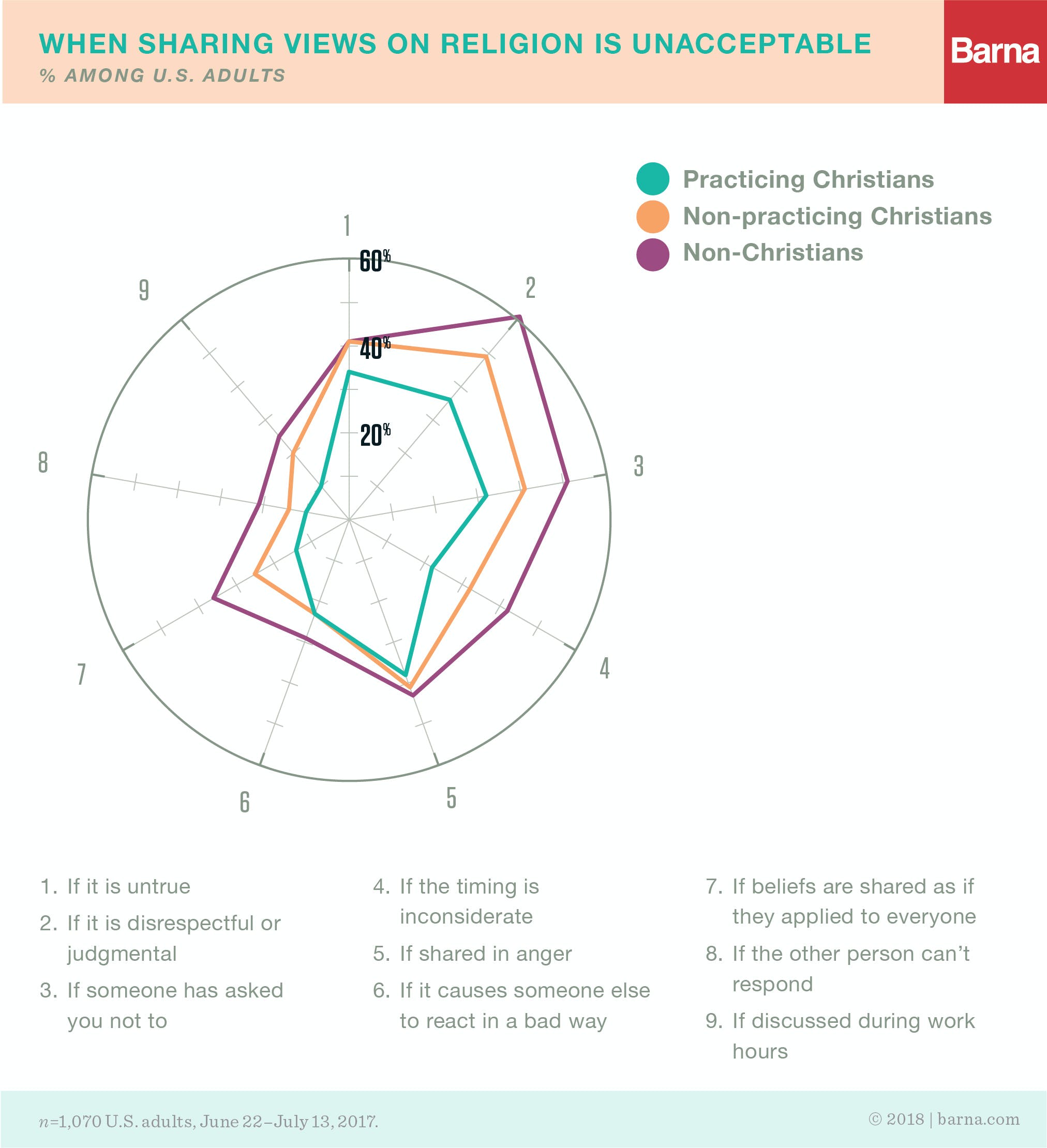 Christians today are more likely to say they are proactive about looking for or trying to create faith-sharing opportunities with non-Christians (19% vs. 11% in 1993). Click To Tweet

What the Research Means
“As spiritual leaders and practitioners, whose job it is to think and talk about matters of faith, it’s easy to imagine everyone is regularly doing the same,” says Roxanne Stone, editor in chief at Barna Group. “After all, aren’t these the big questions of life? Don’t these topics matter more than anything else? The truth is, most Christians are busy with other things: the day-to-day of normal life—jobs, kids, budgets, sports, weather and what’s premiering on Netflix this week. None of this is bad, but the unfortunate reality is that most adults don’t seem to connect their everyday experiences with their faith. Or, at least, they aren’t talking about it if they do.

“So what’s happening here? Why are Christians so reluctant to talk about their faith? The overarching cultural trends of secularism, relativism, pluralism and the digital age are contributing to a society that is less interested in religion and that has marginalized the place of spirituality in everyday life,” continues Stone. “As a result, Christians in America today have to live in the tension between Jesus’ commands to tell others the good news and growing cultural taboos against proselytizing—a core part of Christianity from its origins and, many practicing Christians believe, is essential for the salvation of their listeners.

“Followers of Christ have something essential and meaningful to share with their families, neighbors, friends and those they come into contact with,” concludes Stone. “As pastors and leaders, we must invest the resources of our churches toward coming alongside fellow believers and empowering them with confidence to talk about their faith despite the obvious barriers. We ought to help Christians begin to make the connections between their everyday, ordinary life—their sleeping, eating, going-to-work and walking-around life—and the faith that sustains them.”

About the Research
The primary source of data in this report is a survey of 1,714 U.S. adults, comprised of an over-sample of 535 Millennials and 689 Practicing Christians, conducted online June 22–July 13, 2017. Respondents were recruited from a national consumer panel, and minimal weighting was applied to ensure representation of certain demographic factors, such as age, gender, ethnicity and region. The sample error for this data is plus or minus 2.2% at the 95% confidence level for the total sample. A subgroup of participants had either: “shared my views on faith or religion in the last 5 years” OR “someone has shared their views on faith or religion with me in the last 5 years.”

The other survey was conducted in August 1993 among 501 adults who had shared their faith in the past year with someone who had different beliefs than they did. The sample error for this data is plus or minus 4.5% at the 95% confidence level.

In recent decades, there has been a widely acknowledged trend of a decline in global poverty—1.1 billion people have been lifted out of extreme poverty since 1990. This excerpt from Barna’s new report, produced in partnership with Compassion International, also points to the power of optimism and empathy in facilitating justice for the poor.