Signs of Decline & Hope Among Key Metrics of Faith

Christianity in the United States has undergone dramatic change in the last few decades.

As we continue to share research in the State of the Church 2020, a year-long project exploring the current challenges and opportunities facing the Church, we aim to shed more light on why Americans’ relationship to churches is changing and help Christians discern a faithful direction forward.

Barna Group has been gathering survey data on the long-term shifts that have occurred in the United States over the last several decades. In this report, we explore data collected among 96,171 surveys over more than 20 years, giving us powerful insight into the changes happening in terms of faith practice, such as church attendance, Bible-reading and prayer. What emerges is a nuanced portrait of people trying to figure out what faith means in the 21st Century and the role of Christianity in their lives. And while key markers of religiosity have diminished overall, there are some signs of steadiness among committed Christians that stand in contrast.

David Kinnaman, president of Barna, commented on the findings: “A lot of religion research—even Barna’s—tracks single factors, such as church attendance. But the ‘practicing Christian’ measure is unique in that it combines three variables: calling oneself a Christian, strongly prioritizing faith and regular church attendance. Because each of those three factors have declined over the last twenty years among all adults, the net effect shows the major reshuffling of Americans spiritual lives. Monthly, committed churchgoers are now about half as common as they were two decades ago. This shift has major repercussions for church leaders as there is increased struggle to attract and retain the active segment of churchgoers.

“While the decline of Christian engagement is real, the data remind us that one-quarter of the population qualifies as a practicing Christian. This represents more than 80 million adults—a level of churchgoing that is a statistical outlier among affluent and educated societies.”

One-Third Fewer Americans Attends Church Weekly Now Than in 1993
Evidence of a shifting religious landscape is made even clearer when viewed solely through the lens of church attendance. Here, Barna data goes back to 1993. The graph below visualizes the share of Americans who say that they attend church in the last seven days, a fairly conventional way of measuring church attendance.

There are a number of notable changes over the timeline. First, in the 1990’s, weekly church attendance hovered around 43 percent of the sample. This general trend continued with some stability into the early 2000’s, and then there was a discernible shift upward. During the period from 2005 to 2010, weekly church attendance edged upward, with the highwater mark occurring in 2009 when nearly half Americans (48%) indicated weekly attendance.

Recently, however, Barna’s data show a declining trend. Especially after 2012, weekly attendance declined significantly and has been hovering around three out of 10 adults attending since then.

In actual numbers, 36 percent fewer Americans attended church weekly in 2020 than in 1993. This change could be correlated to a number of reasons, including the growing number of Gen Z and Millennials making up the U.S. population, disputes about who gets to be a part of or lead in the Church, past and current church scandals and perceptions of the Church’s role in politics, to name a few.

If church attendance trends are analyzed by generation, interesting patterns emerge. Declines in church attendance took place among Elders (14 percentage points) and Boomers (13 percentage points), especially after 2012. That’s remarkable considering it’s a common assumption that people become more religiously active as they age. While health ailments could impair the ability of some Elders to make it to weekly services, that is less likely to be the case with Boomers.

Comparing Gen X to Millennials offers up another interesting contrast. While Millennials and Gen X were just as likely to attend church at the beginning of the decade, Millennials have edged below Gen X in nearly every year since. There may be a good reason for that: While many Millennials were still in their late teens and early twenties in 2006, Gen X was already in their late twenties and early thirties. This is important because many young people are still somewhat attached to the faith in which they were raised, but this appears to fade as people move further away from their parents.

Consistency of Bible-Reading has Remained Steady for Nearly a Decade
If church attendance is on the decline, how do other practices of faith stack up over time? Does low church attendance coincide with a decrease in Bible engagement and the practice of prayer? The data indicate that this is not necessarily the case.

Put simply, those who are committed to the spiritual practice of reading the Bible have stayed extremely consistent over the decades. Despite some ups and downs over the years, nearly the same percent of U.S. adults today report reading their Bible weekly as did in 1993 (2020: 35% vs. 1993: 34%). 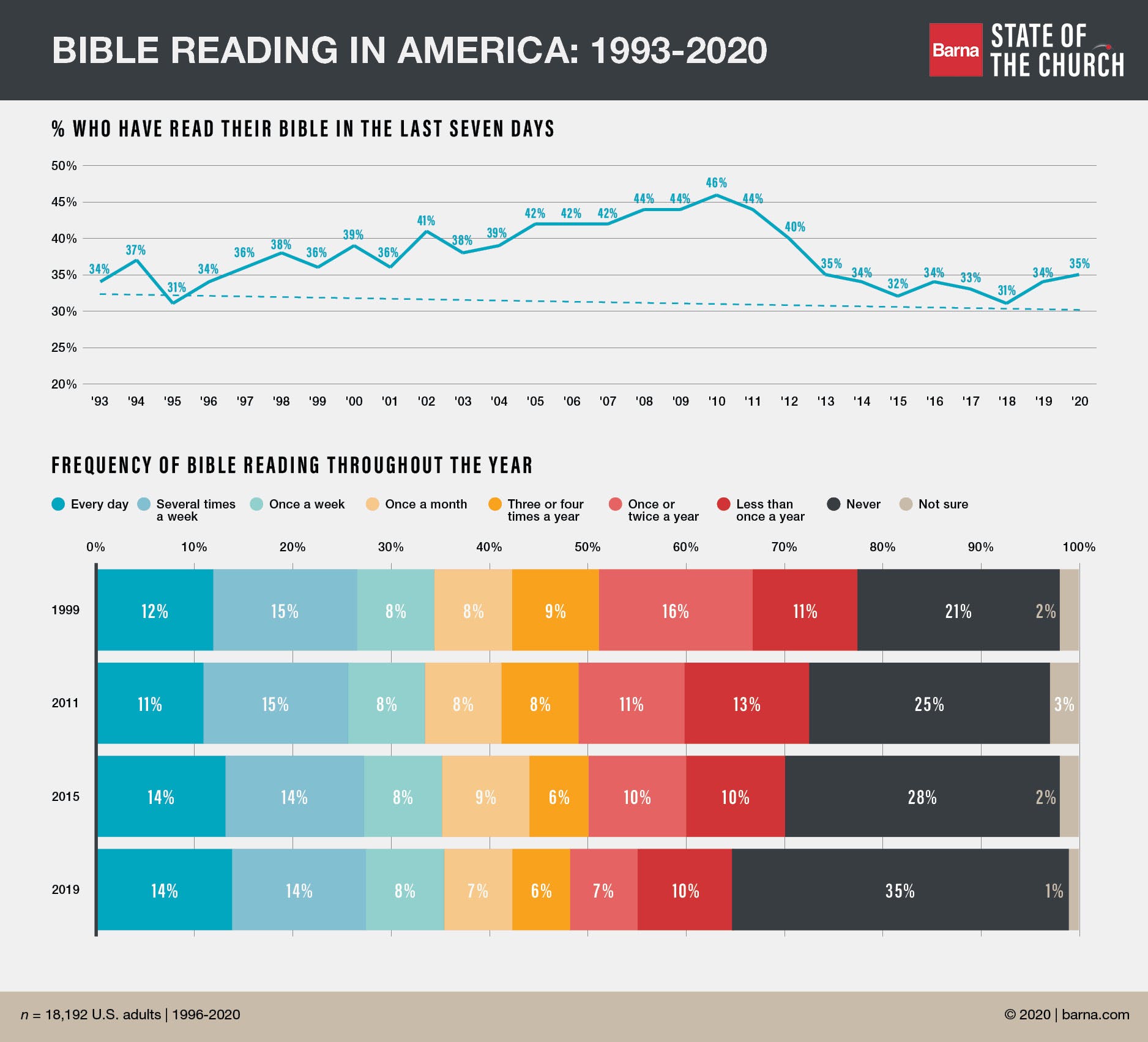 More recently, Barna has partnered with the American Bible Society to gain an even more robust understanding of American’s relationship with the Bible. The graph above visualizes the results from four separate years of that time series. The graph could easily be divided into those on the right side (indicating infrequent Bible reading) and those on the left side of continuum (who read their Bible much more frequently).

The share of Americans who read the Bible at least several times a week has not changed significantly since 2011. However, there is a more dramatic shift among those who have never read a Bible, jumping a full 10 percentage points in the last eight years.

When looking at the trend line among those who read their Bible weekly, the overall message is clear. Those committed to the spiritual practice of Bible reading have stayed just as committed, while those who never made this a consistent part of their lives are now more likely to never open a Bible.

A Majority of Americans Still Reports Praying Weekly
Individuals are much more likely to say a prayer than they are to attend a church service—understandable, as this faith practice is far more accessible and may maintain appeal in a culture that remains open to spirituality even as religious affiliation and institutions have declined in favor. Large majorities of Americans still say that prayer is something that they do on a weekly basis. From 1996 to 2010, there was no statistical difference in the percentage of Americans who prayed, with the number hovering around 83 percent.

Over the last 10 years, however, there has still been a steady, if slow, decline, with just under seven in 10 Americans (69%) affirming they pray weekly.

Taking all these changes into account—the decline of practicing Christians, church attendance and prayer—Barna’s tracking data on these important measures of faith engagement reveal some concerning trends about the vitality of faith in America. Still, there are some bright spots, such as the fact that the share of Americans who make Bible reading a part of their weekly life is nearly the same today as it was in 1993.

This is a key takeaway for faith leaders seeking to make sense of spiritual and cultural shifts in recent decades: Committed Christians are not the ones who are moving away from faith communities; instead, movement is occurring most among those who were only marginally attached to their faith to begin with.

What the Research Means
Kinnaman summarized the implications of the research this way: “More than two and half decades’ worth of tracking research shows that Americans are softening in their practice of Christianity. These stunning changes raise questions and suggest urgent implications.”

“First, why are things changing and how can so much change be occurring? Social research is very limited in answering how or why questions, yet it’s very effective in demonstrating that change is, in fact, happening—and at a relatively rapid pace. Other research (for example, this summary) shows that the U.S. population is undergoing major religious, social, demographic and digital change. The rise of digital life, including social media, the economic crisis, changing attitudes about social issues and the emergence of younger generations on the scene are some of the factors that are likely to form undercurrents recalibrating Americans’ connection to faith and to Christianity.”

“Second, the research raises urgent questions for church leaders about the nature of the relationship Americans have to Christian practice. What redefines and what anchors the churchgoing, Bible reading and prayer of adults? Among the interesting stories in the data is that private practices of faith—such as prayer and Scripture intake—aren’t sliding as much as church attendance.”

“Finally, the study shows reasons for continued hope and for additional reflection. For example, generational change is certainly taking place, but older generations (Boomers and Elders) are drifting away from conventional church attendance at roughly the same pace as younger generations (Gen X and Millennials). Why is that? What can church leaders do to engage the one-quarter of Millennials who remain active in Christian practice? How can the Bible-loyal readers continue to form the bedrock of a resilient Church? In what ways can prayer—the most universal of spiritual activities—be sparked to create spiritual renewal in this society?”

About the Research
Historical tracking data is from Barna’s FaithView metrics and are based on online and telephone interviews within nationwide random samples of 96,171 adults conducted over a twenty-year period ending in February 2020.  Data conducted prior to 2000 is based on 9,445 additional interviews with a random sample of U.S. adults who were surveyed by telephone from 1991 to 1999.

Churchgoing is a dynamic part of U.S. society. New research from Barna Group shows the ways in which Americans are maintaining—and renegotiating—their connections with the churches that they attend. The State of the Church 2020 study is a year-long examination of the spiritual and religious trends that define American life these days. To provide a meaningful analysis of the trends affecting pastors and Christian leaders, Barna’s researchers primarily explored two different categories of adults who have relatively recent experience in a Christian church—practicing Christians and churched adults.