The cohort of Christians known as evangelicals has courted controversy, no matter how you slice it—whether evangelicals only make up just 6 percent of the U.S. population (as Barna’s legacy tracking of the group suggests) or whether they comprise a larger share of the public (as other polls, which use different measures, indicate). As the U.S. enters another heated election year, a new Barna report shows Americans seem to increasingly view evangelicals through a political lens, which corresponds with mixed feelings toward this religious group.

Our research has developed a pronounced portrait of this Christian minority over the years (see the About the Research section at the end of this article for more on Barna’s definition of the group), but for this study our aim was different. We set out to understand how the general public perceives evangelicals. (You can read the full Barna Briefing The Brand of Evangelicals, including new commentary from David Kinnaman, via Barna Access.) Based on a nationwide study of U.S. adults, we found that, though many people still view evangelicals as a committed group of believers who put their faith first, their political connotation puts the future of American evangelicalism in a precarious spot.

U.S. Adults Define Evangelicals by Their Conservatism
What are the traits or qualities that people believe evangelicals represent? Barna asked respondents to identify adjectives they might use to describe the evangelical community in general. The most commonly selected terms relate to the group’s conservatism—primarily as “religiously conservative” (37% of all U.S. adults select this term) and “politically conservative” (27%). These popular perceptions are in line with other Barna data on the demographics of evangelicals, who on average tend to identify as politically conservative and are more represented among the older and white respondents who typically also claim these views. Other common descriptors are a mix of favorable perceptions (23% “caring,” 22% “friendly,” 22% “hopeful,” 20% “encouraging”), along with unfavorable opinions (21% “narrow-minded,” 17% “homophobic,” 10% “misogynistic,” 10% “racist”). 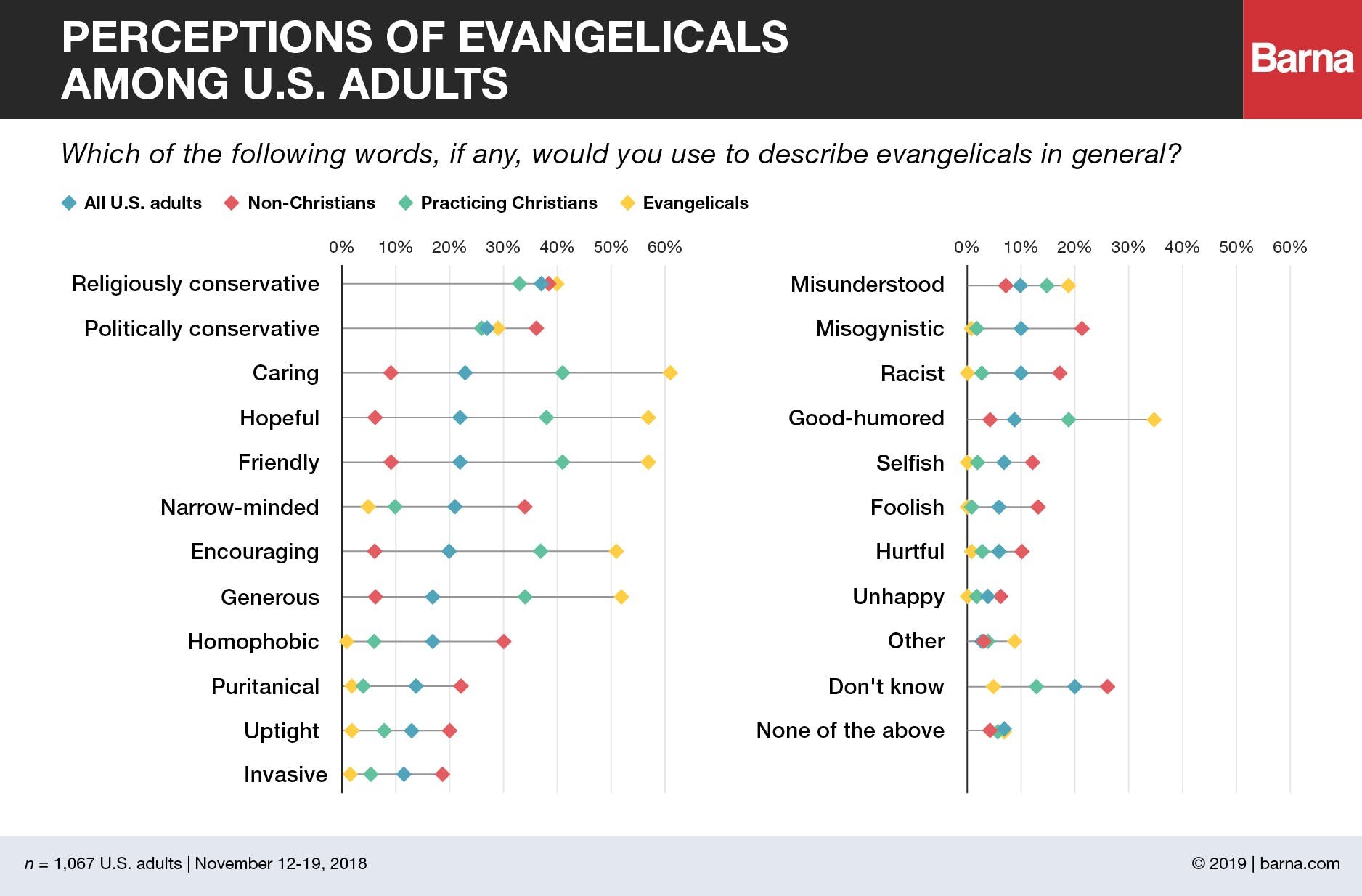 Evangelicals are, unsurprisingly, more sympathetic to their own kind. They describe their fellow evangelicals with positive traits at significantly higher rates than the general population (61% “caring,” 57% “hopeful,” 57% “friendly,” 52% “generous”) while rarely using negative descriptions (5% “narrow-minded,” 2% “uptight,” 1% “homophobic,” 1% “misogynistic”). They are also twice as likely as the general population to believe evangelicals are “misunderstood” (19% vs. 10%).

Barna also analyzed the opinions of practicing Christians—a group of Christians who attend church at least once a month and indicate having made a meaningful commitment to Jesus. This group includes most evangelicals but represents a wider swath of engaged believers, amounting to about one-quarter of Americans, rather than the narrowly defined evangelicals. As expected, the perceptions that practicing Christians hold about evangelicals fall somewhere in the middle of the general population and core evangelicals. Non-Christians are predisposed to hold negative ideas about evangelicals, favoring adjectives like “narrow-minded” (34%), “homophobic” (30%), “misogynistic” (21%), “racist” (17%) and “uptight” (20%).

Along lines of political ideology, the divide is dramatic. Across the board, those who identify as “mostly conservative” are significantly more likely than those who identify as “mostly liberal” to view evangelicals positively. Again, considering the conservative leanings of evangelicals, these numbers make sense. Some of the most striking differences surface around whether terms like “misogynistic” (1% conservative vs. 26% liberal), “racist” (2% vs. 25%), “homophobic” (4% vs. 41%), “narrow-minded” (8% vs. 48%), “caring” (35% vs. 13%) and “hopeful” (36% vs. 12%) might apply to evangelicals. 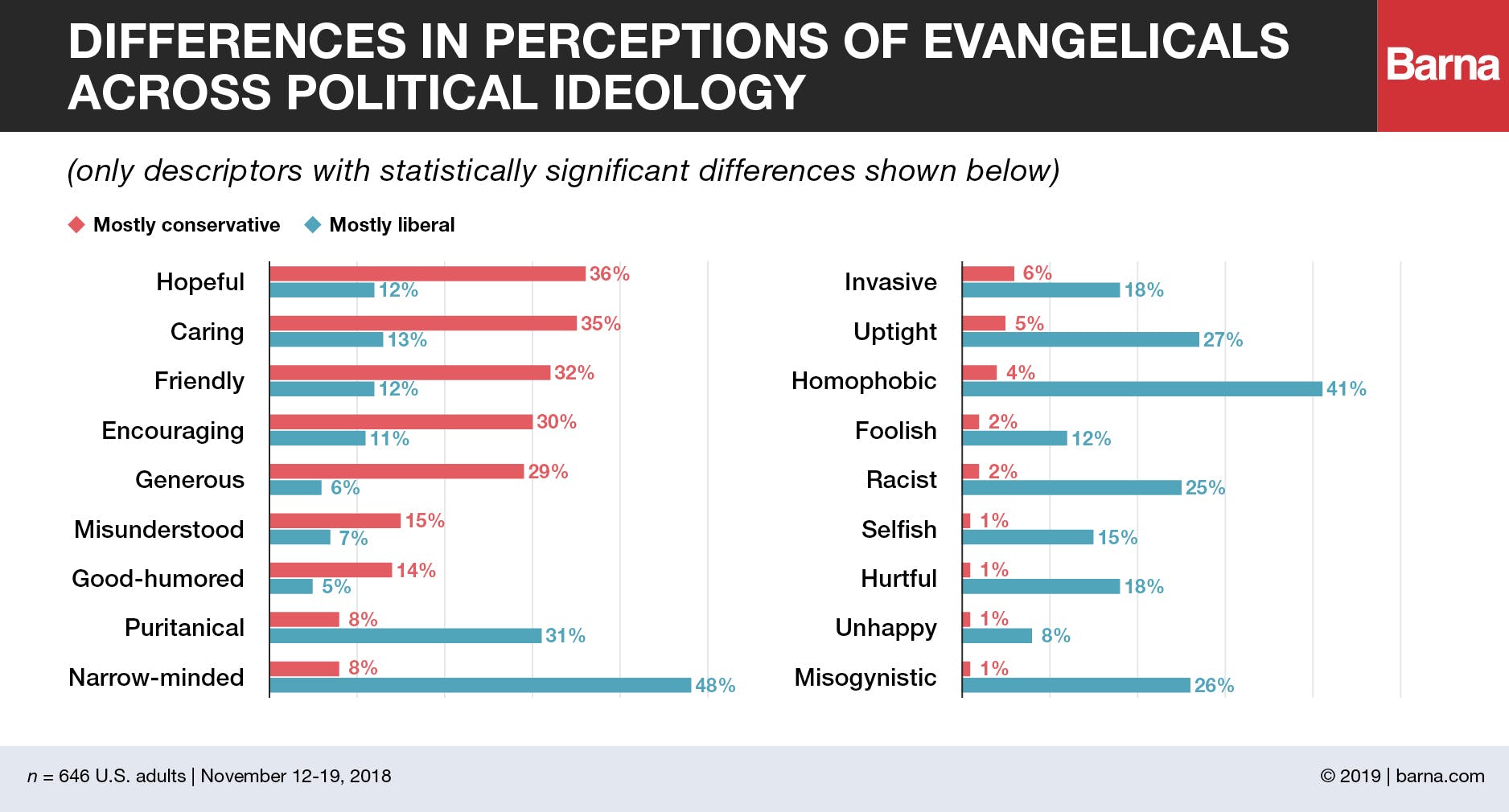 Most Americans Have Had a Neutral Personal Experience of Evangelicals
Given the wide mix of descriptors that might be applied to evangelicals, are U.S. adults open or opposed to this group?

When asked to characterize whether their own opinion of evangelicals is positive or negative, the plurality of U.S. adults (46%) expresses a “neutral” opinion. Three in 10 (30%) have a very or somewhat positive impression of the faith group, while one in four (25%) holds a very or somewhat negative opinion. A plurality of practicing Christians (36%) and evangelicals (45%) says their overall perception is very positive, while nearly half of non-Christians (47%) has some level of negative feeling toward the group.

Interestingly, though one might expect more negative attitudes toward evangelicals among younger adult generations who are typically less religious, this study showed almost no statistically significant differences among Millennials, Gen X and Boomers for this question. (The sample sizes for those at either end of the generational spectrum—Gen Z and Elders—are not large enough to report on.)

On this question of personal opinion of evangelicals, a political divide emerges again. Just about half of those who identify as mostly conservative (49%) have at least somewhat positive perceptions, while an equivalent proportion of those who identify as mostly liberal (52%) has at least somewhat negative perceptions. The balance of opinion is expressed as indifference toward evangelicals (42% conservative, 32% liberal have neutral perceptions).

What experiences or characterizations drive these positive or negative opinions of evangelicals? What challenges does the evangelical reputation face? To what extent are evangelicals still known for their desire to fulfill the Great Commission? Learn more about this study in the new Barna Briefing, The Brand of Evangelicals.

“The findings of the The Brand of Evangelicals report are a clear indication of the divided nature of the U.S. population—and evangelicals are at the epicenter of many of those differences of opinion, worldview and practice.

“In addition to those two sides of the ‘Divided States of America,’ an important part of understanding the perceptions of evangelicals is the large percentage of Americans who have no opinion of evangelicals—that is, who express neutrality or no opinion in response to the survey questions. For these adults, there is an impregnable fortress of indifference toward evangelicals. The extreme views (both favorable or unfavorable) dominate the discussion, but the middle ground doesn’t really know what to think about evangelicalism. That’s not a sensational story these days, but it’s an important one.

“Of course, it’s most important that Christians of all traditions, evangelical or otherwise, concern themselves with the reputation of Jesus, not merely the perceptions of evangelicals. Yet, will the public witness of evangelicals be a bridge or a barrier to the very thing they hold most dear: persuading others to put their faith in Christ? The findings strongly suggest that the perceptions of evangelicals are more barrier than bridge on the road to gaining a hearing for the gospel. As such, the results of this research require much soul searching among Christians to discern a way forward with the current ‘evangelical brand.’”

For Christian leaders, what are the missional implications of negative public perceptions of evangelicals? Get more original insights on the research from David Kinnaman in the new Barna Briefing, The Brand of Evangelicals.

About the Research
Interviews with U.S. adults included 1,067 web-based surveys conducted among a representative sample of adults over the age of 18 in each of the 50 states. The survey was conducted from November 12 to 15, 2018. The sampling error for this study is plus or minus 3 percentage points, at the 95% confidence level. Minimal statistical weighting was used to calibrate the sample to known population percentages in relation to demographic variables.

Non-Christians do not self-identify as Christian.

Evangelicals say they have made a personal commitment to Jesus Christ that is still important in their life today and believe that, when they die, they will go to heaven because they have confessed their sins and accepted Jesus as their savior, plus seven other conditions. These include saying their faith is very important in their life today; believing they have a personal responsibility to share their religious beliefs about Christ with non-Christians; believing Satan exists; believing that eternal salvation is possible only through grace, not works; believing that Jesus Christ lived a sinless life on earth; asserting that the Bible is accurate in all that it teaches; and describing God as the all-knowing, all-powerful, perfect deity who created the universe and still rules it today. Being classified as an evangelical is not dependent on church attendance or the denominational affiliation of the church attended and respondents are not asked to describe themselves as evangelical.

Photo by Štěpán Vraný from Unsplash

What Young Adults Say Is Missing from Church

Just over half of 18–35-year-old Christians surveyed for The Connected Generation study (54%) attend church at least once a month, including one-third (33%) who are in the pews once a week or more. Three in 10 (30%) attend less frequently. A small group of Christians (10%) says they used to go to church, but no longer do. Despite their fairly consistent presence in the pews, almost half of Christians (44%) say that attending church is not an essential part of their faith. But even if belonging to a community of worship isn’t always seen as essential, young Christians who attend church point to many reasons their participation may be fruitful, most of which pertain to personal spiritual development.