The Trends Shaping a Post-Truth Society

The term “post-truth” is now often used to describe the current political climate in the United States, in which reality is relative and even the facts are open to interpretation. In the feature story of the new, 2018 edition of Barna Trends—an annual collection summarizing a year’s worth of Barna’s major research studies and including analysis, interviews and infographics—the Barna team and other trusted experts identify cultural and spiritual reasons the world is no longer in agreement about anything.

The Facts About “Fake News”
Barna Trends 2018 begins with an overview of the dwindling public confidence in institutions—especially, and very notably in 2017, the media. However, three in 10 U.S. adults (31%) say the primary source of the “fake news” problem most often lies in reader error—“misinterpretation or exaggeration of actual news on social media”—not factual mistakes in reporting itself. And it would seem there are plenty of chances for these social media mistakes: When asked what kind of news media people are most likely to share, social media posts tie with traditional reporter-written articles as the top response (25% each). Though a plurality (36%) says they verify reports by comparing to multiple sources, the tendency to share social media posts as news points to a preference for more salacious, opinion-forward headlines and reporting. At the least, it allows opportunity to perpetuate it; a plurality (38%) never corrects misinformation they see on social media.

A plurality of U.S. adults says they never correct misinformation they see on social media. Click To Tweet 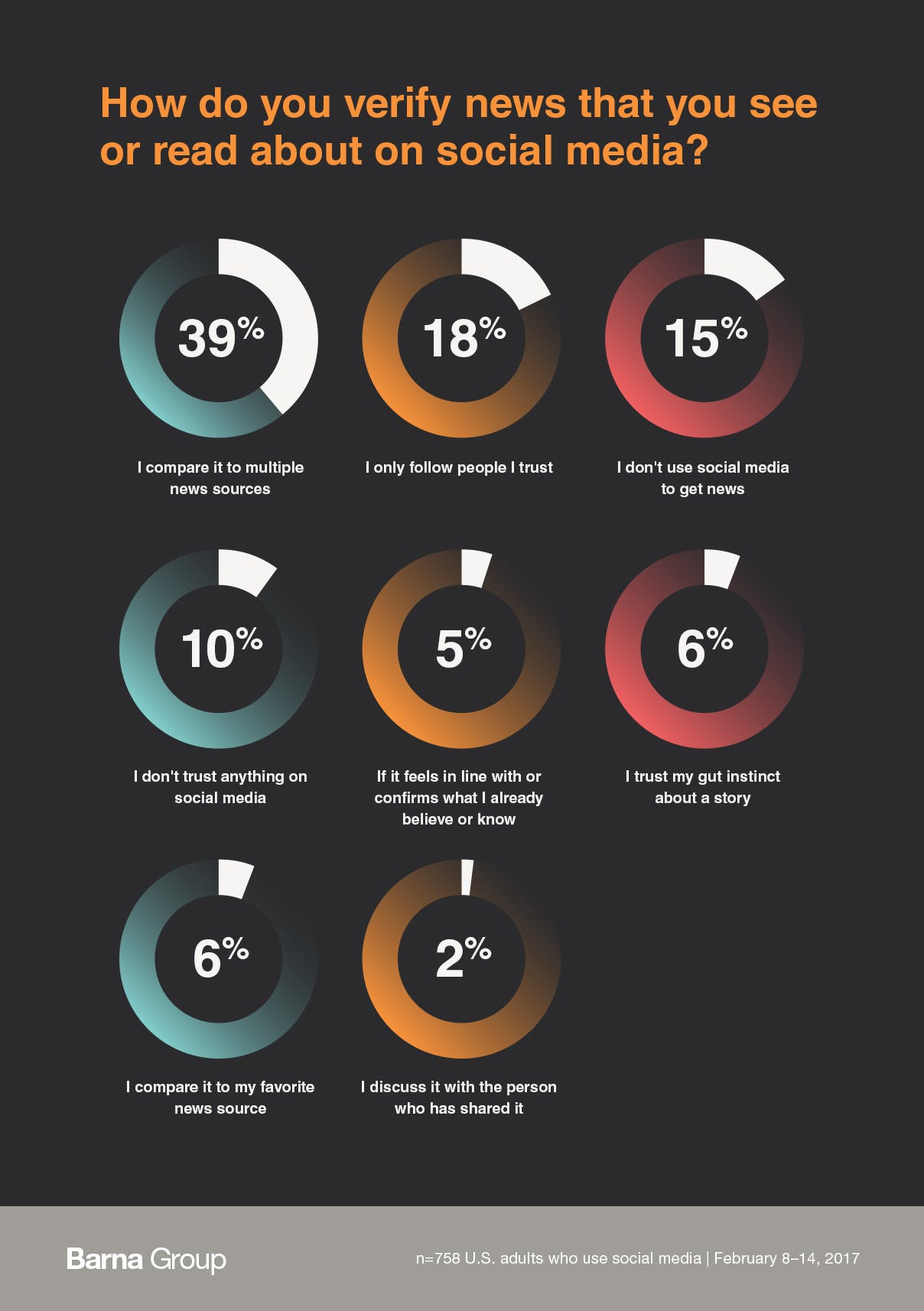 As much as the media has been called into question of late, reporters still top the list as credible sources of news (39%)—but are followed closely by the self: Nearly a third (32%) says they trust nobody, only their own instincts. The next response is friends, family members or peers (27%), revealing a propensity to turn inward or to one’s tribe for truth when outside authorities are no longer seen as reliable.

One-third of Americans says they trust nobody, only their own instincts, when consuming news. Click To Tweet 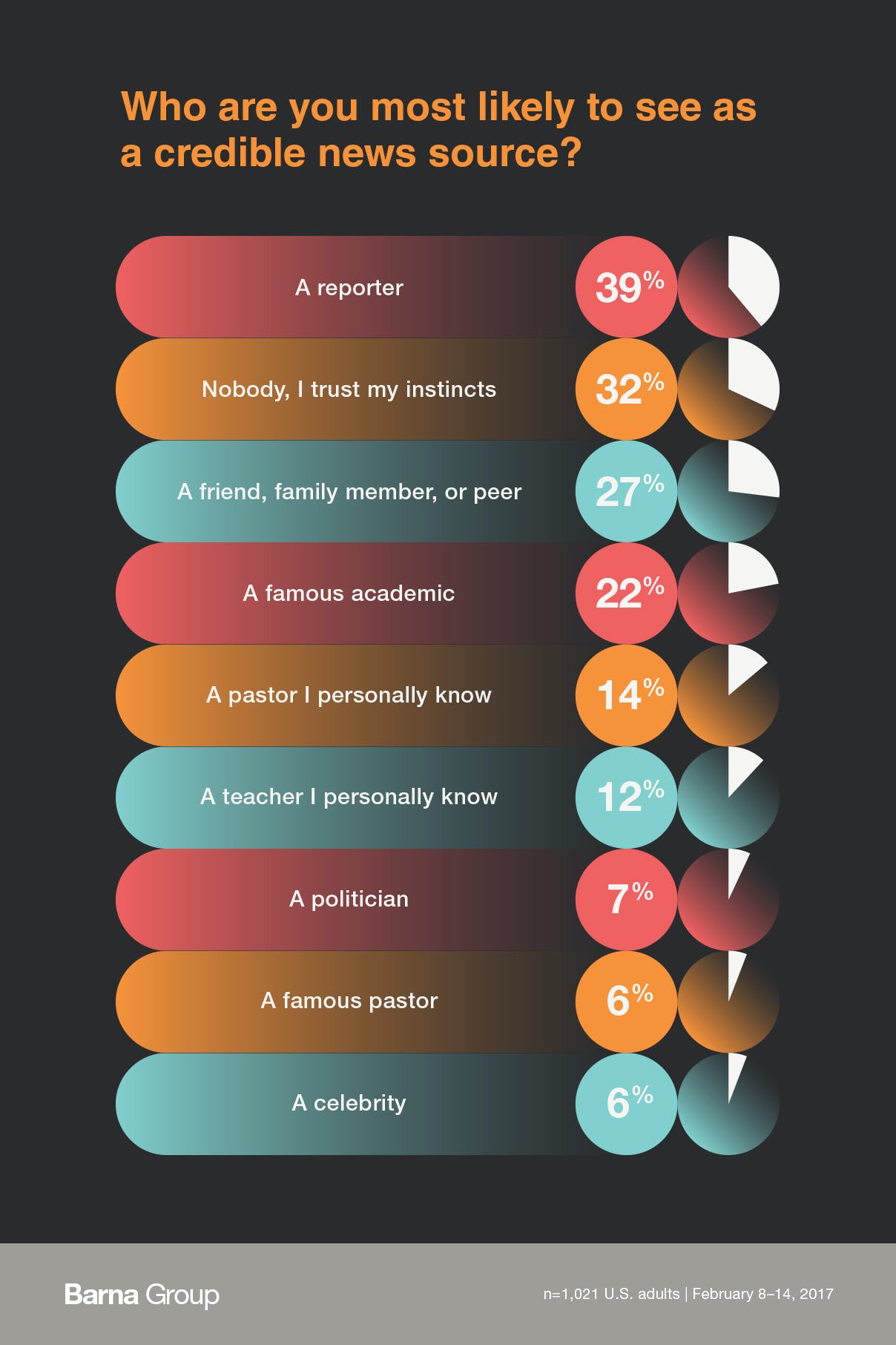 Get more thoughts on the state of journalism in interviews with Sarah Pulliam Bailey, Tom Krattenmaker and more, featured in Barna Trends 2018.

Trump’s Trust Problem
This echo-chamber effect in media consumption might also be a reason that, in the 2016 election, groups already compelled to vote for President Trump brushed off many of the negative stories about him, yet were enraged by headlines about Hillary Clinton—and vice versa. Trump is, undoubtedly, a central figure in this discussion, and his fascination with and hostility toward the press is well-documented (more recently, in his tweets about giving out awards for “the most dishonest and corrupt media”). As a result, Barna Trends 2018 focuses at-length on views of Trump’s policies, personality and performance in his inaugural year in office.

Despite Trump’s barbs about journalists, one in five U.S. adults (21%) says a free press is something that makes America great (to borrow phrasing from Trump), and they don’t see Trump as a bastion of truth himself. As of a mid-2017 Barna survey, more than half of Americans (56%) say they do not trust Trump, and one-third (33%) doesn’t trust any of his cabinet members and key officials. These averages, of course, belie stark contrasts when looking at political ideology, party affiliation, generation and faith segment, as Trump’s supporters generally remain positive. (Read more about the process and limits of political polling from Barna’s senior vice president of research.)

The Sacred Self
Media voices aren’t the only ones facing a crisis of credibility; Barna Trends 2018 concludes with sobering data that shows the areas in which Christianity’s influence is waning. Just about one-third of Americans (36%) strongly believes churches “have their best interest at heart,” and one in four (25%) does not put stock in pastors’ insights on the issues of the day.

Meanwhile, truth is increasingly regarded as something felt, or relative (44%), rather than something known, or absolute (35%)—a shift reflected in other new religion surveys covered in Barna Trends 2018. For example, many Americans (56%), especially Millennials (64%), don’t feel that any one religious text has a monopoly on truth, but that they are all different expressions of the same spiritual message. As a result, some spiritually inclined Americans seek faith outside of the local church context, as is the case with “the spiritual but not religious” or those who “love Jesus but not the church,” individuals that Barna grouped and studied for the first time in 2017. 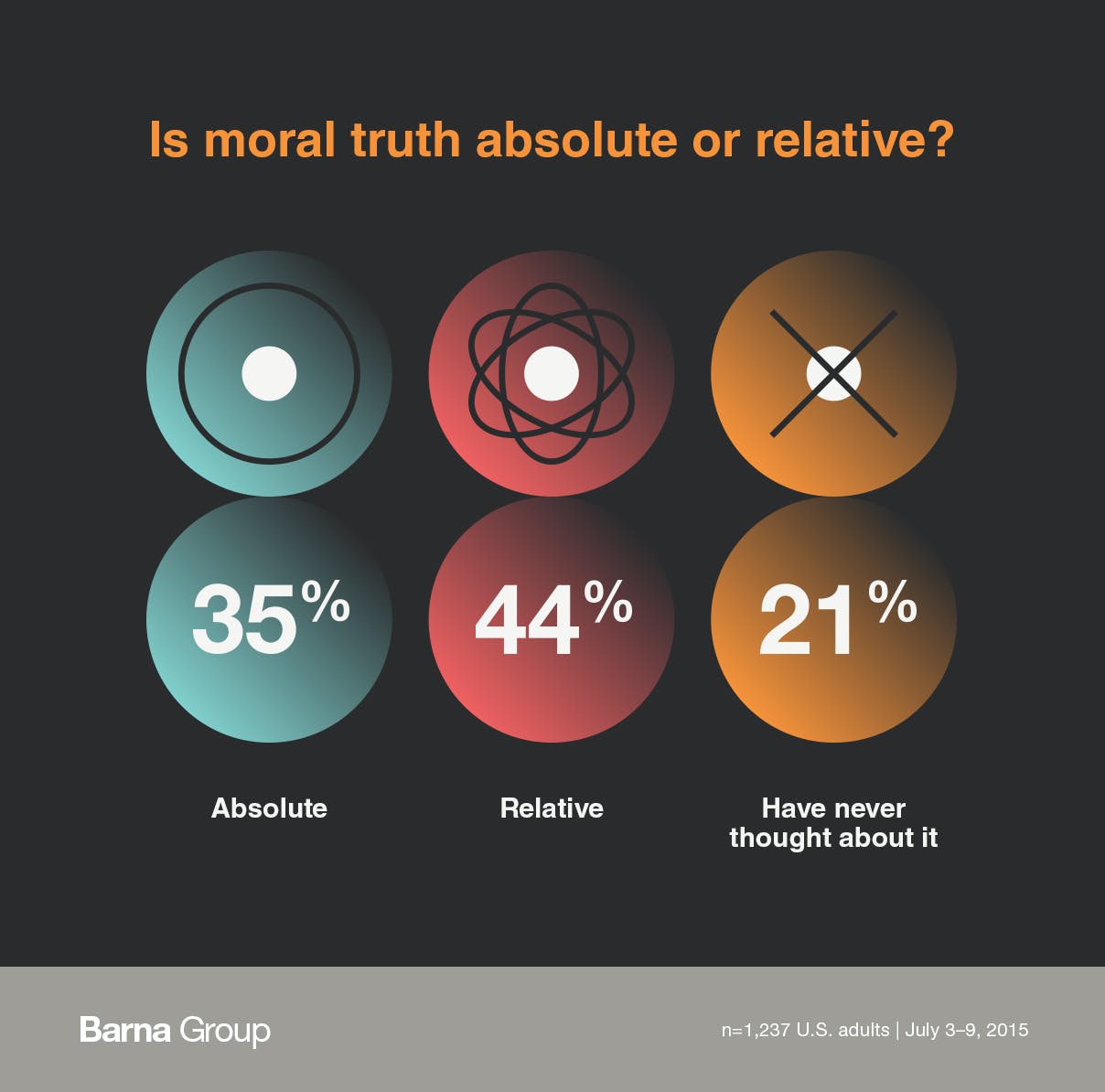 “What is it that the local church can offer their faith that they can’t get on their own?” Barna editor in chief Roxanne Stone writes in a column for Barna Trends 2018. “Churches need to be able to say to these people—and know for themselves—that there is a unique way you can find God only in church. And that faith does not survive or thrive in solitude.”

It’s possible, of course, that some solo pursuits of spiritual fulfillment have less to do with an abandonment of religion and more to do with a growing focus on what could be categorized as “self-care.” Popular examples of such practices, featured in original infographics for Barna Trends 2018, include reflecting in nature (25%), reading books about spiritual topics (21%) or meditating (19%). In general, Millennials are drawn to a variety of soul-searching activities, from agnostic ones like journaling (28%) to liturgical ones like daily centering prayer (21% among Millennial practicing Christians).

In a post-truth climate, the challenge, particularly for faith leaders, may be to find that balance between encouraging positive signs of introspection while confronting wholly subjective approaches—whether in interpreting facts, discerning truth or practicing faith.

Jamie Tworkowski, Jonathan Morrow, Cheryl Bridges Johns, Chuck DeGroat, David Kinnaman and more offer insights on the above in Barna Trends 2018. Get your copy of Barna Trends 2018 for further analysis, infographics and expert commentary about the cultural, religious and political shifts shaping the next year.

About the Research
The statistics and data in Barna Trends 2018 have been drawn from a series of national public opinion surveys conducted by Barna Group. Minimal statistical weighting was used to calibrate the sample to known population percentages in relation to demographic variables. Methodology for the research in the excerpt above is as follows: 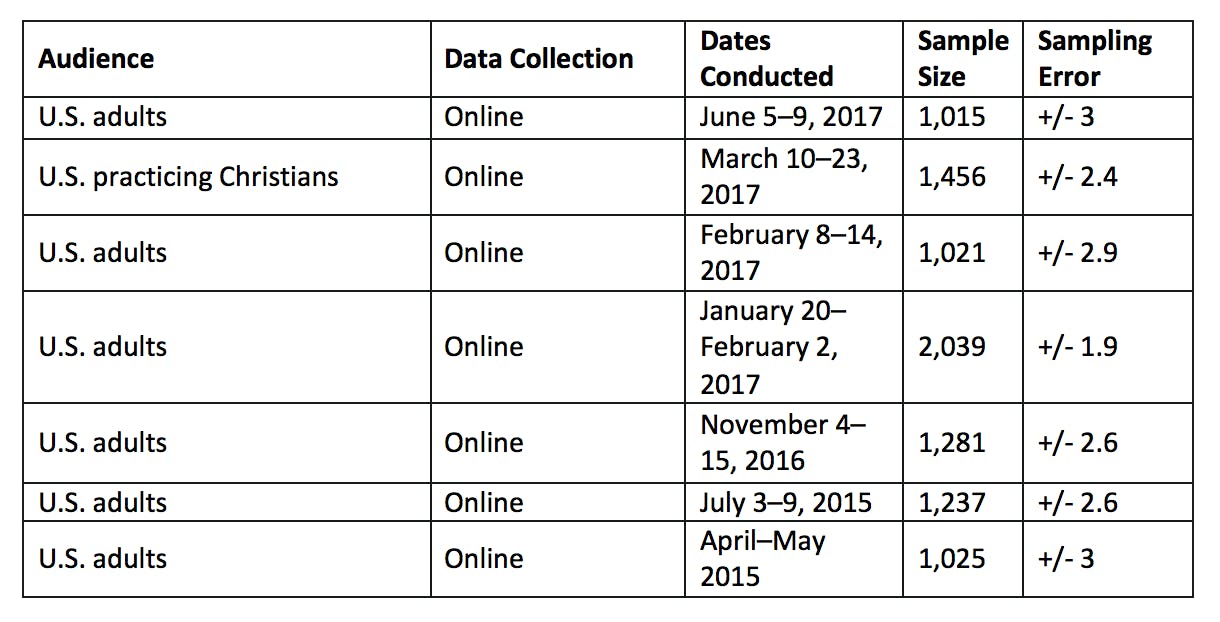 A lot happened this year: a new president, hurricanes, tragic shootings, a solar eclipse and the #MeToo conversation. To mark the end of an eventful year, we compiled our top 10 most-read articles from online research releases.