Only a month ago, as part of our State of the Church project, Barna revealed evidence of what we were calling “worship shifting,” the tendency to rely on digital spiritual tools (such as podcasts, streamed sermons, radio, etc.) instead of attending a church service at a set time and in person. We shared new data showing 22 percent of practicing Christians—and 52 percent of practicing Christian Millennials—say they replace traditional church in this way regularly, at least half the time.

How quickly the lens through which we view these findings has changed; as social distancing has gone into effect to quell the spread of COVID-19, digital disruption has affected faith communities on an unprecedented scale.

Currently, Barna’s weekly national surveys of pastors (as well as responses from those participating in the ChurchPulse Weekly check-ins) have pointed to the reality that this forced transition away from physical worship spaces was not one many ministries were completely ready for: a quarter of U.S. pastors (26%) surveyed during March 20-23, shortly after social distancing began, said their greatest priority for their church was putting in place technology solutions for streaming services and / or online giving. In data collected April 7-13, we found that nearly half of pastors (47%) don’t expect to be back in their buildings until May, with another 35 percent holding out hope for June—though 43 percent assume the circumstances surrounding the pandemic could still worsen (9% much worse, 34% a little worse), a harsh reality that adds even more unease to the current mental and emotional health of both pastors and their congregants.

Over the years, Barna has had several opportunities to research practicalities and perceptions of where American Christians come together. In this article, we’ll summarize how we’ve built an understanding of church buildings and look toward the future of worship spaces.

New- & Old-Fashioned: Where Millennials Want to Worship
In Making Space for Millennials, based on a study conducted in partnership with Cornerstone Knowledge Network, we learned that young adults—a group whose relationship to institutional Church is already tenuous—preferred what could be seen as a historic standard for churches: communal rather than private (78% vs. 22%), sanctuaries rather than auditoriums (77% vs. 23%), classic rather than trendy (67% vs. 33%). Yet, they described their “ideal” church as casual (64%), relaxed (60%) and modern (60%), not so much traditional (40%). 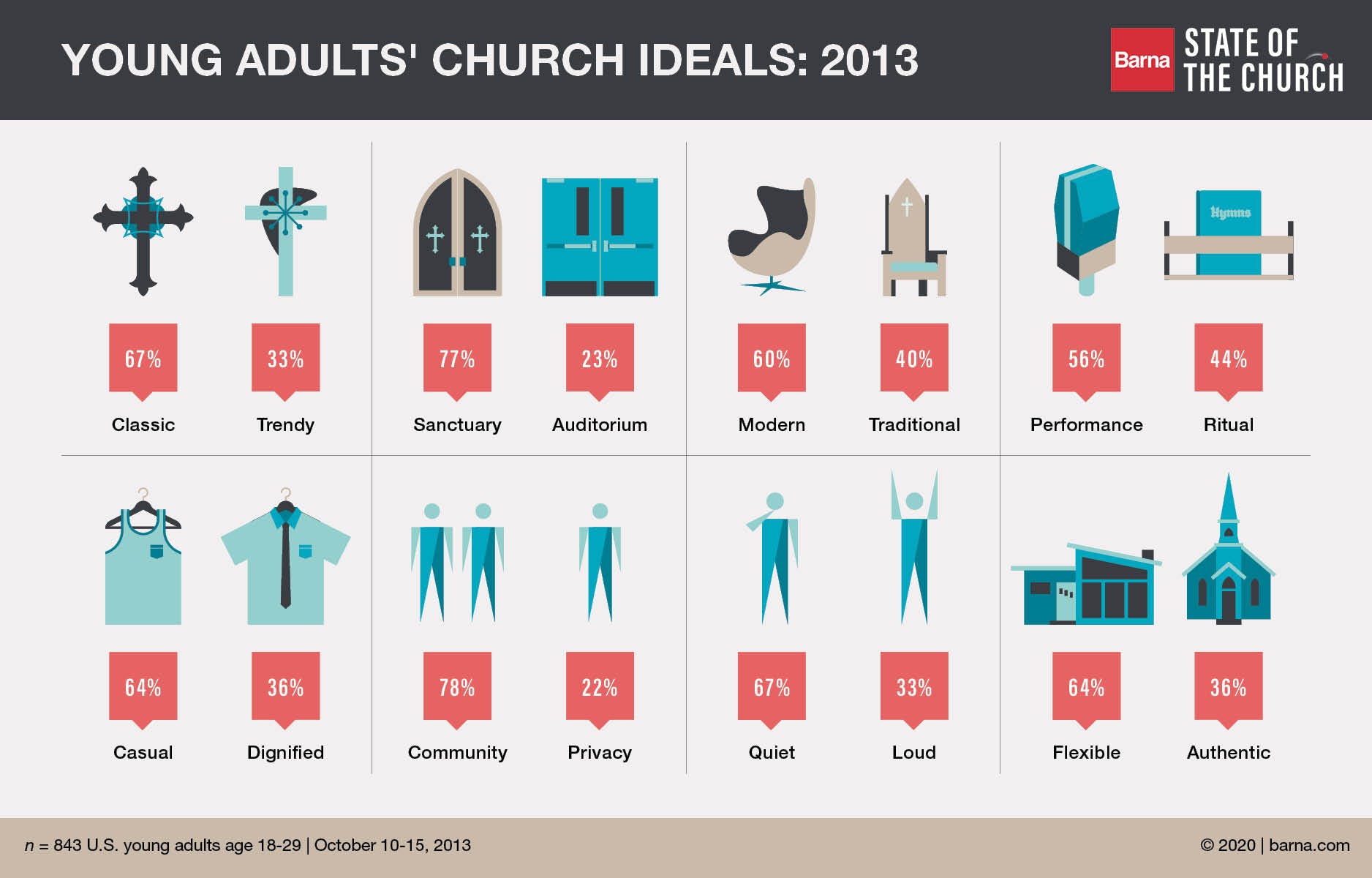 “And herein lies a cognitive dissonance common to survey participants,” we reported. “Many of them seem to aspire to a more traditional church experience, in a beautiful building steeped in history and religious symbolism, but they are more at ease in a modern space that feels more familiar than mysterious.”

Overall, nearly half of Millennials at that time in 2013 (47%) said it was at least somewhat important that a church building look like a church, and they were more attracted to images from churches that had clear iconography and objects connecting them to religious history and expression. Additionally, buildings with some integration or interaction with natural elements—large windows, indoor greenery, courtyards and so on—were highly appealing to younger adults.

When Congregations Grow: Multisite & Church Planting
Many churches, especially in certain evangelical congregations, have been driven toward strategic and exponential growth, either through multisite (multiple campuses that are part of a single church) or church plant (separate churches intended to operate independently at some point) models. Sometimes churches might also be “co-located,” meaning they share a space with another congregation or group.

Also in partnership with Cornerstone Knowledge Network, Barna conducted a specialized 2016 study of churches that have launched new congregations. Leaders in these often well-established churches usually reported being driven by a sense of calling to fulfill a mission or to be more effective in their city or region. Typically, this seems to work; respondents in these churches pointed to numerical and spiritual growth, including more unchurched people joining the pews (39%).

Still, the physical context matters, and much thought—and worry—is given to the facilities to which they expand. Among even the churches with several locations or plants, about one in five leaders said finding new locations was more expensive and more difficult than they’d expected. Faced with the trade-off between location and size of space, respondents indicated that location (60%)—ideally a permanent rather than temporary one (70%)—was significantly more important.

So, what are the main focuses of selecting or building a multisite or church plant campus? Children’s (and, to a lesser degree, youth) ministry areas were a top priority for all types of expanding churches. Audio / visual capabilities and lighting were also an important investment, especially for multisite churches, some of which rely on broadcasts or videos to deliver sermons or other community information. Four out of 10 multisite churches surveyed prioritized these technical aspects, with slightly fewer church plants selecting this option.

Complementing what Barna has observed among the church building preferences of Millennials, many pastors of individual campuses (39%) noted that moving to a traditional church building helped them gain credibility in a new community.

When Congregations Disperse: The Physical Challenges Now Facing Churches
Well before COVID-19 reached pandemic levels and introduced risk for religious gatherings, physical worship spaces have been facing other challenges. Some pastors find themselves either fighting off developers aiming to convert dying churches into high-priced residences, or fighting against lagging attendance numbers that can’t sustain the financial needs of their house of worship.

As author Jonathan Merritt noted in an article for The Atlantic, “The cost of maintaining large physical structures that are in use only a few hours a week by a handful of worshippers becomes prohibitive. None of these trends shows signs of slowing, so the United States’ struggling congregations face a choice: Start packing or find a creative way to stay afloat.”

Certainly, many churches are still rising to the challenge of innovation. Marian Liautaud of Aspen Group recently wrote for Christianity Today about trends that could shape the future of churches, from strategies driven by big data and heightened security concerns to the popularity of communal, multi-use buildings and outdoor gathering spaces. And we can’t ignore the number of churchgoers who are opting for more intimate gatherings; in the past three years, one in three churched adults (34%) says they have attended a worship service in someone’s home. 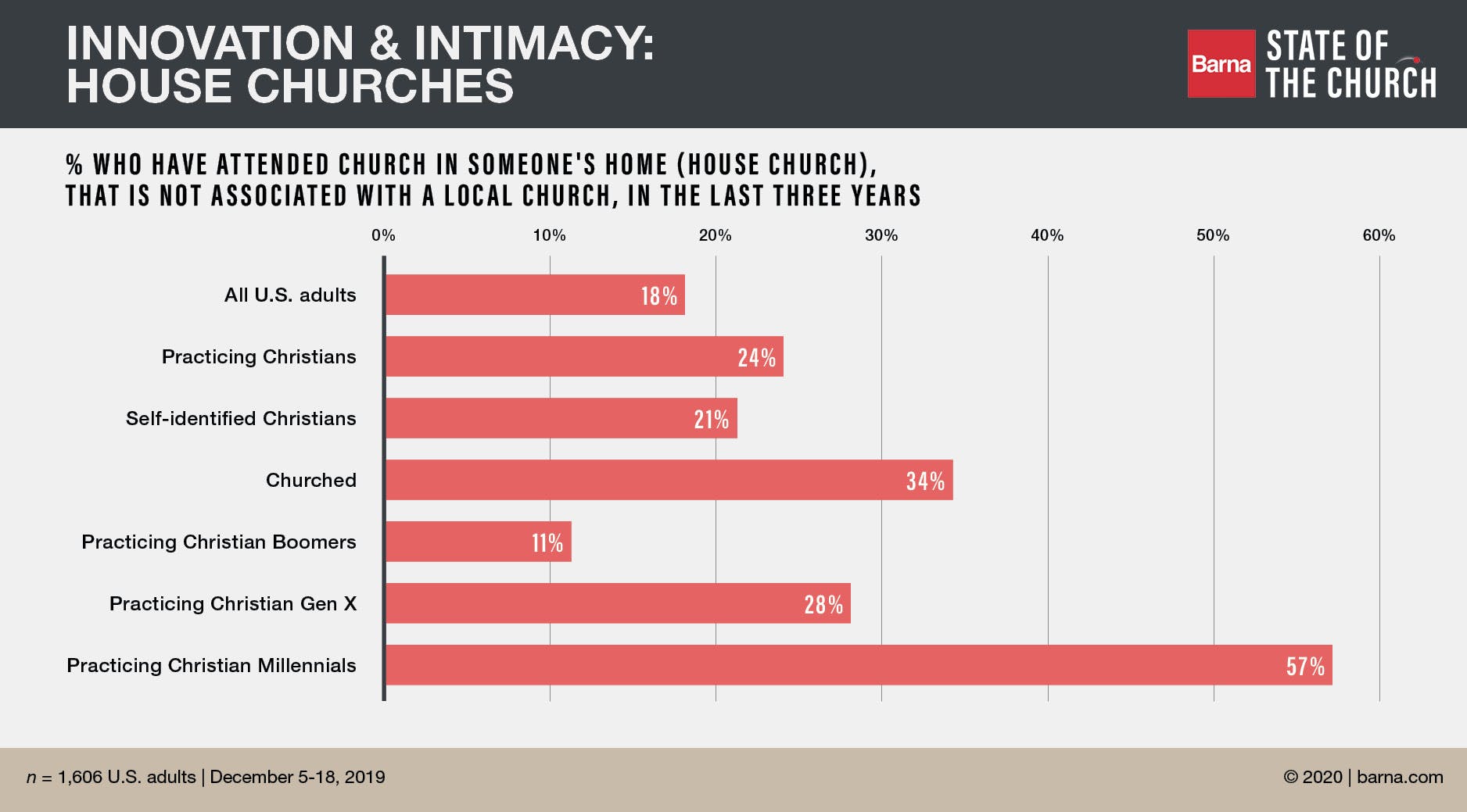 Yet it seems America’s churches have now stepped into a physical unknown. Since Barna began collecting data on pastors’ response to COVID-19, the majority—66 percent—has noted that giving has decreased. Currently, 23 percent are now considering reductions to staff in some way. It stands to reason that many are facing hard decisions about how to keep their buildings, and what to do with them in the meantime.

Interestingly, virtual attendance of late has been greater than the typical physical Sunday gathering, according to many pastors (51%). This could be influenced by a few factors, such as Americans’ longing for spiritual guidance in a crisis, the accessibility of digital service options, the fact that online attendance is now more concentrated—or, perhaps, that churches’ online efforts are proving welcome and effective. Could this be a sign of a new virtual norm? Or is it possible that when—and, for some congregations, if—churches open their doors wide again, many attendees may be ready to enter them?

As we continue our year long research into the State of the Church, we’ll look further into the implications COVID-19 has on where and how Christians gather together to worship—both during and after the pandemic—as well as invite experts and faith leaders to speak into this conversation. These findings and more will be broadcast live during our State of the Church 2020 webcast for church leaders on May 20, 2020.

Click here to register for the State of the Church 2020 webcast, a free event for church leaders and their teams that will broadcast live on May 20, 2020 at 1pm ET.

In an effort to help serve the Church during this time of unprecedented disruption and as a continued part of our research into the State of the Church 2020, Barna and Gloo have created the ChurchPulse Weekly Crisis Toolkit, a free resource that includes three ways to help pastors see clearly and lead effectively in this time of uncertainty. To learn more about the Crisis Toolkit, click here.

About the Research
For the Making Space for Millennials study, the Barna/CKN Millennials and Architecture survey included 843 online surveys conducted among adult residents of the United States ages 18 to 29. The survey was conducted from October 10 through October 15, 2013. The margin of error for a sample of this size is plus or minus 5.2 percentage points, at the 95% confidence level.

The research was jointly commissioned by Cornerstone Knowledge Network and Barna Group.

The data contained in this report about multisite and churchplant churches is from More than Multisite, a study commissioned by Cornerstone Knowledge Network on behalf of Aspen Group and Fishhook. Qualitative research for this study consisted of 31 individual interviews with church leaders of multisite and planting churches, including some consultants who have worked with numerous such churches over the years. These in-depth interviews were conducted either in-person at the 2015 Exponential West conference or via phone in October and November 2015.

The subsequent quantitative survey was administered online, March 7 to April 6, 2016, to leaders of churches that self-identify as one of the following:

In order to achieve a representative sample of multisite and planting churches, participants were invited from national lists of senior pastors and screened for inclusion based on their role in decisions about their church’s growth. A total of 222 church leaders were included in the survey portion of the study: 56 percent of whom are responsible for one location, and 44 percent of whom are responsible for multiple churches or campuses. The sampling error is plus or minus 6.6 percent with a 95-percent confidence interval. Any differences called out between the comparison groups (five models of churches) are significantly different at the 95-percent confidence level, such that even these small sample sizes point to actual trends or unique perspectives among the different church types.

The statistics and data-based analyses referenced in the second chart and surrounding paragraphs are derived from a national public opinion survey conducted by Barna among 1,606 U.S. adults, including 794 practicing Christian adults. Responses were collected online between December 5-18, 2019, using a nationally representative panel. The rate of error for this data is +/- 2.2% at the 95% confidence level.

Regarding the most recent data collected during the COVID-19 crisis, Barna Group conducted this survey online among 875 Protestant Senior Pastors from March 20–April 13, 2020. Participants are all members of Barna Group’s Church Panel. Minimal weighting has been used to ensure the sample is representative based on denomination, region and church size.

Photo by Gregory Allen on Unsplash.