Sharing one’s faith—evangelizing—is a core practice among many religions. For Christians, it’s viewed as a mandate from Jesus himself before he departed earth: commanding his disciples to “spread the good news.” Yet, today, a number of factors are curbing many Christians’ enthusiasm for faith-sharing, including the decline of religion in America, a spreading apathy toward spiritual matters and a growing cultural suspicion of people of faith.

It is against this backdrop that Barna is releasing Reviving Evangelism, a new report based on research commissioned by Alpha USA. This study looks at the faith-sharing experiences and expectations of Christians and non-Christians alike. Among the major findings in this report is the revelation that Christian Millennials feel especially conflicted about evangelism—and, in fact, almost half believe it is wrong to share their faith.

Ready—but Not Willing—to Talk About Faith
Almost all practicing Christians believe that part of their faith means being a witness about Jesus (ranging from 95% to 97% among all generational groups), and that the best thing that could ever happen to someone is for them to know Jesus (94% to 97%). Millennials in particular feel equipped to share their faith with others. For instance, almost three-quarters say they know how to respond when someone raises questions about faith (73%), and that they are gifted at sharing their faith with other people (73%). This is higher than any other generational group: Gen X (66%), Boomers (59%) and Elders (56%).

Despite this, many Millennials are unsure about the actual practice of evangelism. Almost half of Millennials (47%) agree at least somewhat that it is wrong to share one’s personal beliefs with someone of a different faith in hopes that they will one day share the same faith. This is compared to a little over one-quarter of Gen X (27%), and one in five Boomers (19%) and Elders (20%). (Though Gen Z teens were not included in this study, their thoroughly post-Christian posture will likely amplify this stance toward evangelism.) 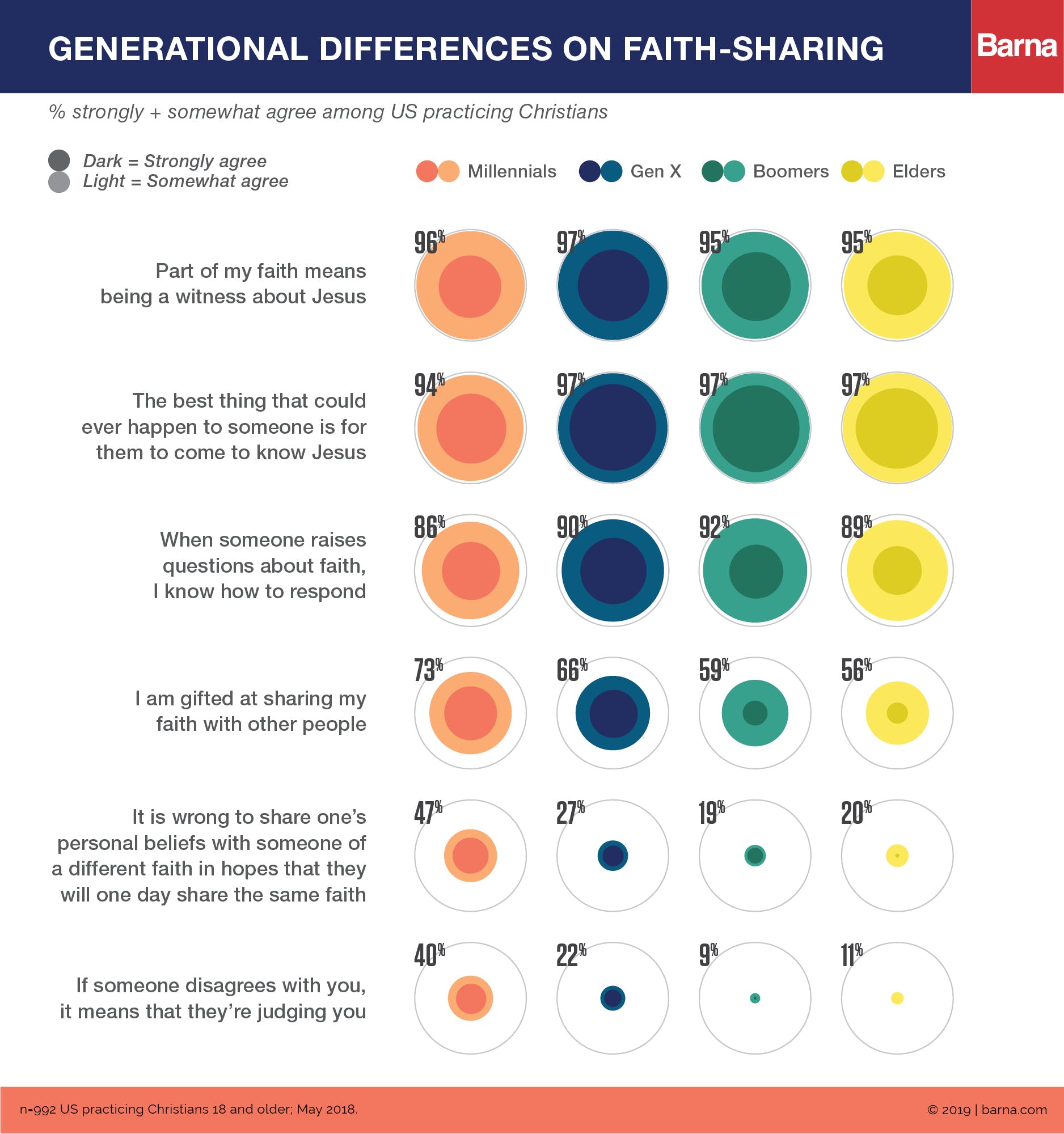 Younger Christians tend to be more personally aware of the cultural temperature around spiritual conversations. Among practicing Christians, Millennials report an average (median) of four close friends or family members who practice a faith other than Christianity; most of their Boomer parents and grandparents, by comparison, have just one. Sharing the gospel today is made harder than at any time in recent memory by an overall cultural resistance to conversations that highlight people’s differences.

Society today also casts a negative light on proselytization that many older Christians do not fully appreciate. As Barna found in research published in Spiritual Conversations in the Digital Age, three out of five Christian Millennials believe that people today are more likely than in the past to take offense if they share their faith (65%)—that’s far higher than among Boomer Christians (28%). Millennials are also either two (Gen X) or three times more likely (Boomers and Elders) than any other generational group to believe that disagreement means judgment.

What the Research Means
David Kinnaman, president of Barna Group, says this study highlights a need for Christians to bolster their confidence in certain convictions—among them, the belief that “evangelizing others is good and worthy of our time, energy and investment.”

“To start, we must pass on resilient faith to Christian young people (this is also a form of evangelism), planning especially for the pivot point of the high school and college-age years,” Kinnaman says. “The dropout problem is real, and it has a chilling effect on the overall evangelistic environment. It is impossible to exactly trace the impact of lapsed Christians on non-Christians, but sobering to consider the ‘de-evangelistic’ clout of those who leave the faith.

“Even after they are committed to sustaining resilient faith, we must persuade younger Christians that evangelism is an essential practice of following Jesus,” Kinnaman continues. “The data show enormous ambivalence among Millennials, in particular, about the calling to share their faith with others.

“Cultivating deep, steady, resilient Christian conviction,” Kinnaman concludes, “is difficult in a world of ‘you do you’ and ‘don’t criticize anyone’s life choices’ and emotivism, the feelings-first priority that our culture makes a way of life. As much as ever, evangelism isn’t just about saving the unsaved, but reminding ourselves that this stuff matters, that the Bible is trustworthy and that Jesus changes everything.”

A brand new Barna report, Faith Leadership in a Divided Culture, finds that in the Christian church, leaders believe discipling Christians around social issues is a critical part of their pastoral responsibility. However, when it comes to some issues in particular, pastors feel a level of sensitivity and pressure in how they approach controversial topics from the pulpit.