What Non-Christians Want from Faith Conversations

A growing secularization and a waning interest in religious matters have contributed to tension in faith conversations today. This apathy is spreading among Christians themselves; as Barna recently reported, almost half of practicing Christian Millennials say evangelism is morally wrong. Our recent report Reviving Evangelism, produced in partnership with Alpha USA, looks at the faith-sharing experiences and expectations of Christians and non-Christians alike. The study points to a stark gap between who non-Christians want to talk to about faith and the Christians they actually know.

Nearly all non-Christians (identify with a faith other than Christianity or no faith at all) and lapsed Christians (identify as Christian but have not attended church within the past month) have a friend or family member who practices and prioritizes Christianity—but these believers may not be their ideal conversation partners when it comes to faith. For instance, more than six in 10 non-Christians and lapsed Christians (62%) say they would be open to talking about faith matters with someone who listens without judgment—the top quality they value—but only one-third (34%) sees this trait in the Christians they know personally. Similarly, their hopes of talking with Christians who do not force conclusions (50% vs. 26%), demonstrate interest in other people’s stories (29% vs. 17%) and are good at asking questions (27% vs. 16%) appear to go unfulfilled. 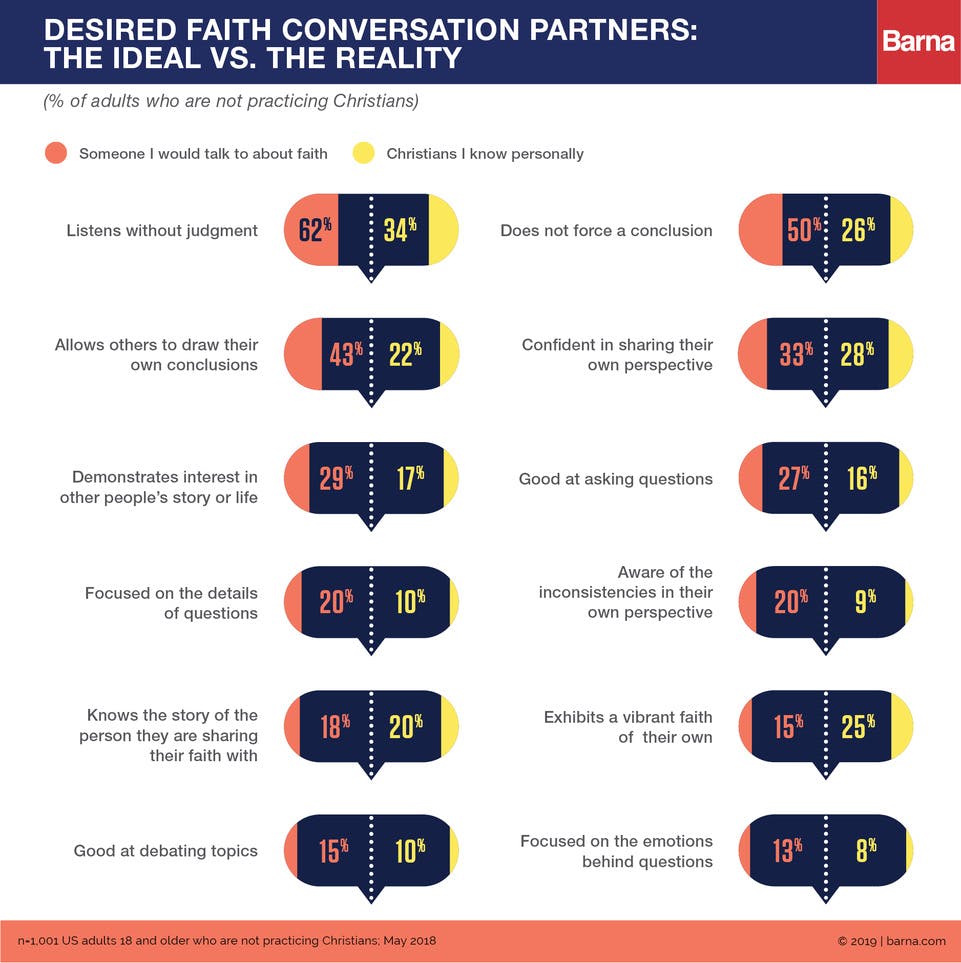 Just as non-Christians and lapsed Christians fail to see desired conversational traits in the Christians they know, practicing Christians are hesitant to say some of the same descriptions are true of themselves. For instance, three-quarters of practicing Christians (76%) believe someone who listens without judgment is gifted at sharing their faith, but only 44 percent believe it is completely true of themselves. Again, the trend continues when it comes to being someone who doesn’t force a conclusion (54% vs. 41%), demonstrates interest in other people’s stories or lives (56% vs. 39%) or asks good questions (44% vs. 26%).

However willing they may be, Christians’ ability to witness for Christ may be impeded by the simple fact that they don’t have meaningful relational connections with non-Christians, or the conversational skills necessary to talk meaningfully about faith.

Photo by Joshua Ness on Unsplash

Over the years, Barna has been tracking changes in both romantic ideals and relationship status in America. As Valentine's Day is upon us, we mapped the top 10 American cities where practicing Christians are most likely to be married or most likely to be single.