Christian Millennials Are Most Likely Generation to Lean Toward Charismatic Worship

Since COVID-19 and the nation’s response to the pandemic have disrupted daily life in the U.S., Barna data show that churchgoers across the country have been rethinking their once routine Sunday morning experience. As of May 2020, during the initial peak of social distancing measures, nearly half of churched adults had not streamed online service in the past four weeks, and one in three practicing Christians had simply stopped attending church during COVID-19. Some of these numbers may attest to the role physical community plays in encouraging regular church attendance and engagement. Like faith leaders around the country, we’ve been asking, what do Christians value most in their weekly worship experience—and are these perhaps some of the things that are difficult to replicate in digital services?

One aspect of the “new Sunday morning” that has largely been impacted by social distancing guidelines is group expressions of worship, like corporate singing or taking communion. This article will take a look at some pre-COVID data to illuminate the worship styles and preferences of believers across generational, denominational and ethnic lines.

62 Percent of Elders Prefer Traditional Worship—Only 38 Percent of Millennials Say the Same
Worshipping through music and song is a part of nearly every Christian tradition and worship service, but styles of music vary across generational, cultural and denominational lines, just to name a few. In early 2020, Barna asked practicing Christians what sort of music they prefer. Multiple choices were allowed and included everything from liturgical to lively.

Perhaps unsurprisingly, some of the most notable differences are found among the different age groups. When compared to other generations, Elders are the most likely to choose hymns (66% vs. 45% Boomers, 32% Gen X, 19% Millennials) and a traditional style (62% vs. 51% Boomers, 39% Gen X, 38% Millennials) for worship services. On the other hand, after traditional worship, Millennials gravitate toward lively (30% vs. 21% Gen X, 23% Boomers, 15% Elders) and charismatic worship, (18% vs. 13% Gen X, 10% Boomers, 9% Elders), but also show greater openness than older adults toward a more contemplative form (17% vs. 8% Gen X, 9% Boomers, 8% Elders). Gen X and Boomers neither lead nor lag when it comes to worship preferences; typically, their responses bridge the gap between Millennials and Elders.

Denomination, naturally, also plays a large role in an individuals’ preferred worship style. Christians who attend mainline and non-mainline churches seem to be parallel in terms of most music and worship preferences—but one notable difference is found in the desire for liturgical expression. Attendees of mainline churches are significantly more likely than those at non-mainline churches to prefer this form of worship (14% vs. 7%).

Along ethnic or racial lines, nearly half of all white Christians prefer a traditional style of worship (49% vs. 38% of all ethnic minorities) and hymns (44% vs. 25% all ethnic minorities). Over half of Black practicing Christians note the desire for gospel singing (56% vs. 20% white), a style also favored by Hispanic practicing Christians (31%). These few differences hint at the various ways congregations of diverse racial backgrounds might prefer to worship during a Sunday service. Due to low sample size, the data for Asian Christians in the U.S. is not able to be reported in this specific analysis.

One-Third of Millennials Says Praying in Tongues Should Be a Part of Weekly Worship
Looking past music and worship styles, Barna also wanted to learn more about the importance of specific elements of worship or faith expression—such as reading of liturgy, praying aloud or communion—particularly when it comes to practicing Christians’ weekly routines.

Across the age groups, worship through song and praying aloud are seen as the central practices. Elders consistently rank the importance of a range of weekly worship expressions more highly, except when it comes to the Pentecostal or charismatic act of “glossolalia,” or what is more commonly referred to as praying in tongues or prayer language. Meanwhile, over one-third of Millennials (36%) believes this is an important expression that should be a weekly part of their worship experience. Only one in five Gen X (20%), 14 percent of Boomers and 6 percent of Elders say the same. These generational findings fall in line with Barna’s past reporting on charismatic Christianity. Across all other options, Millennials follow a pattern of preference similar to that of older believers, but are less likely to rank each specific worship practice as important. 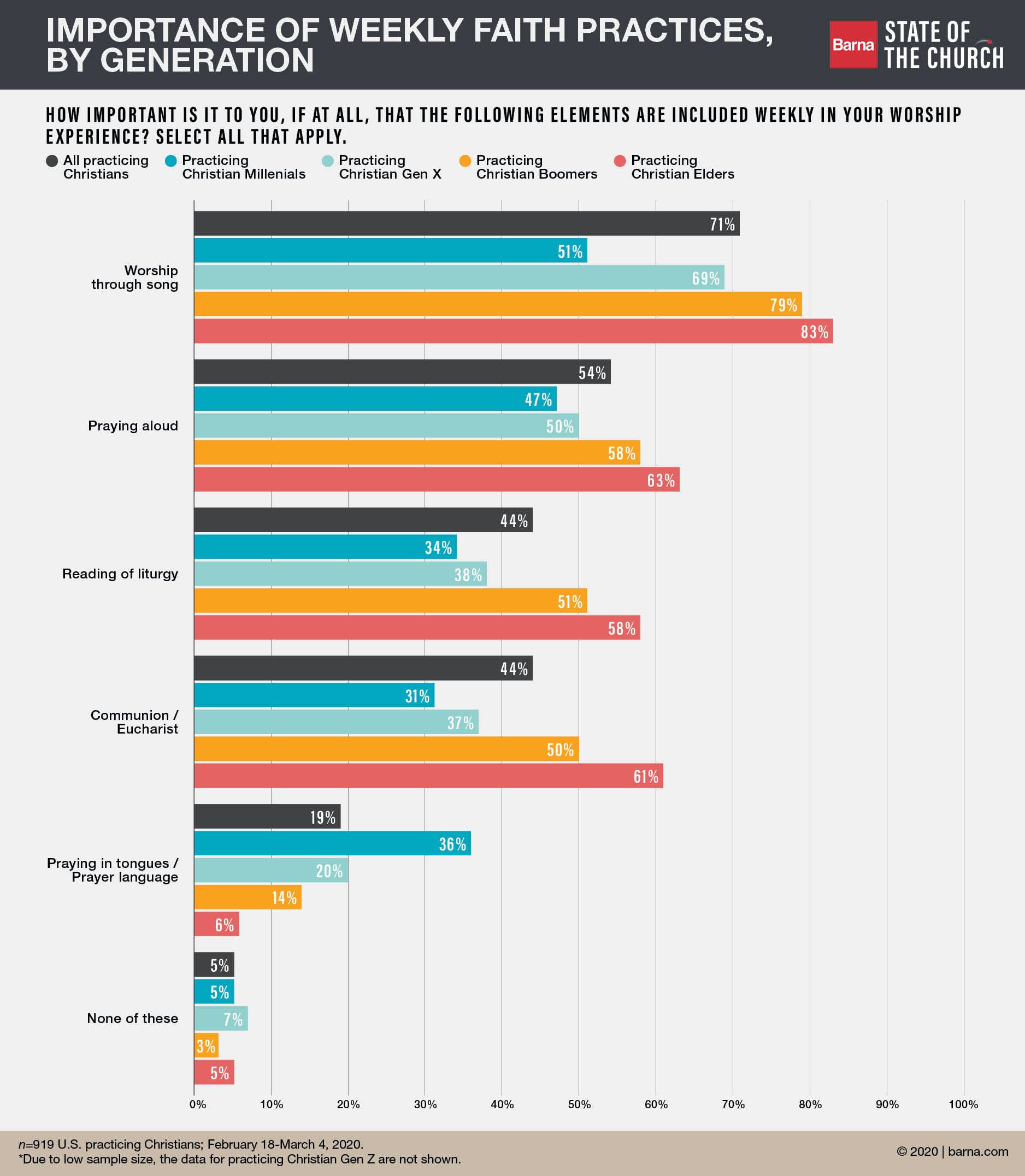 White practicing Christians are also more likely than all non-white respondents to express the desire for weekly worship traditions such as partaking in communion (49% vs. 33%) and the reading of liturgy (49% vs. 36%). Meanwhile, ethnic or racial minorities are significantly more likely than their white peers to value praying in tongues weekly (32% vs. 13%).

The pandemic has drastically altered the way Americans—especially practicing Christians—engage with their faith communities, though it has also provided ample opportunity for individuals to customize their weekly worship experience with the use of digital tools. In light of this, Barna and State of the Church project partner Gloo created the ChurchPulse tools and metrics which pastors can use to gauge whether their people are flourishing and their organization is thriving, even in the midst of disruption.

To read the full version of this article, subscribe to Barna Access Plus, our new digital subscription service. Barna Access is also home to our ChurchPulse tools, which can be utilized with a free membership to measure the flourishing of your congregation.

About the Research
The statistics and data-based analyses in this study are derived from a national public opinion survey conducted by Barna among 919 U.S. practicing Christian adults. Responses were collected online between February 18-March 5, 2020, using a nationally representative panel. The rate of error for this data is +/- 3.1% at the 95% confidence level.

Christians are self-identified Christians, including those who identify as Catholic, excluding those who identify as Mormon or Jehovah’s Witness.
Practicing Christians identify as Christian, agree strongly that faith is very important in their lives and have attended church within the past month.
Churchgoers / Churched adults have been to church in the last six months.
Mainline refers to denominations such as American Baptist Churches USA, the Episcopal Church, Evangelical Lutheran Church of America, United Church of Christ, United Methodist Church and Presbyterian Church USA.
Non-mainline refers to denominations such as charismatic / Pentecostal churches, the Southern Baptist Convention, churches in the Wesleyan-Holiness tradition and non-denominational churches.

Photo by David Beale on Unsplash.

In early April, just a few weeks after local and federal government issued safe at home orders and urged citizens to observe social distancing guidelines, Churchpulse Weekly hosts Carey Nieuwhof and David Kinnaman shared findings related to the mental and emotional health of pastors and their congregants in light of current events. Now, in the most recent ChurchPulse Weekly episode, Nieuwhof and Kinnaman take another look at the numbers, honing in on the data on church leaders’ well-being, before inviting Lysa TerKeurst to comment on the data and offer practical advice for pastors leading through crisis.