Data featured in this article came from research for The Connected Generation report. Purchase your copy today!

Barna spent much of last year researching and learning more about what we are calling the connected generation, the 18–35-year-olds—comprised of both Gen Z and Millennials—who are the future of our world. The Connected Generation report, conducted in partnership with World Vision, takes into account 15,369 interviews across 25 countries in 9 languages, allowing us both a broader and more focused lens with which to understand young adults.

With 2020 upon us and new year’s resolutions in full swing, we wanted to highlight the top accomplishments and goals of this generation.

A Success-Driven Generation Turns Its Focus Toward Home
The connected generation gave us a clear view of their priorities in this study, offering responses for both past achievements and future goals. Of those who participated in the survey, nearly half had finished their education (48%) and become financially independent from their parents (46%). Four out of 10 say they traveled to other countries (43%), started a career (41%) and became spiritually mature (40%). Milestones that ranked lower on the list included getting married (25%), caring for the poor and needy (25%) and buying a home (21%). 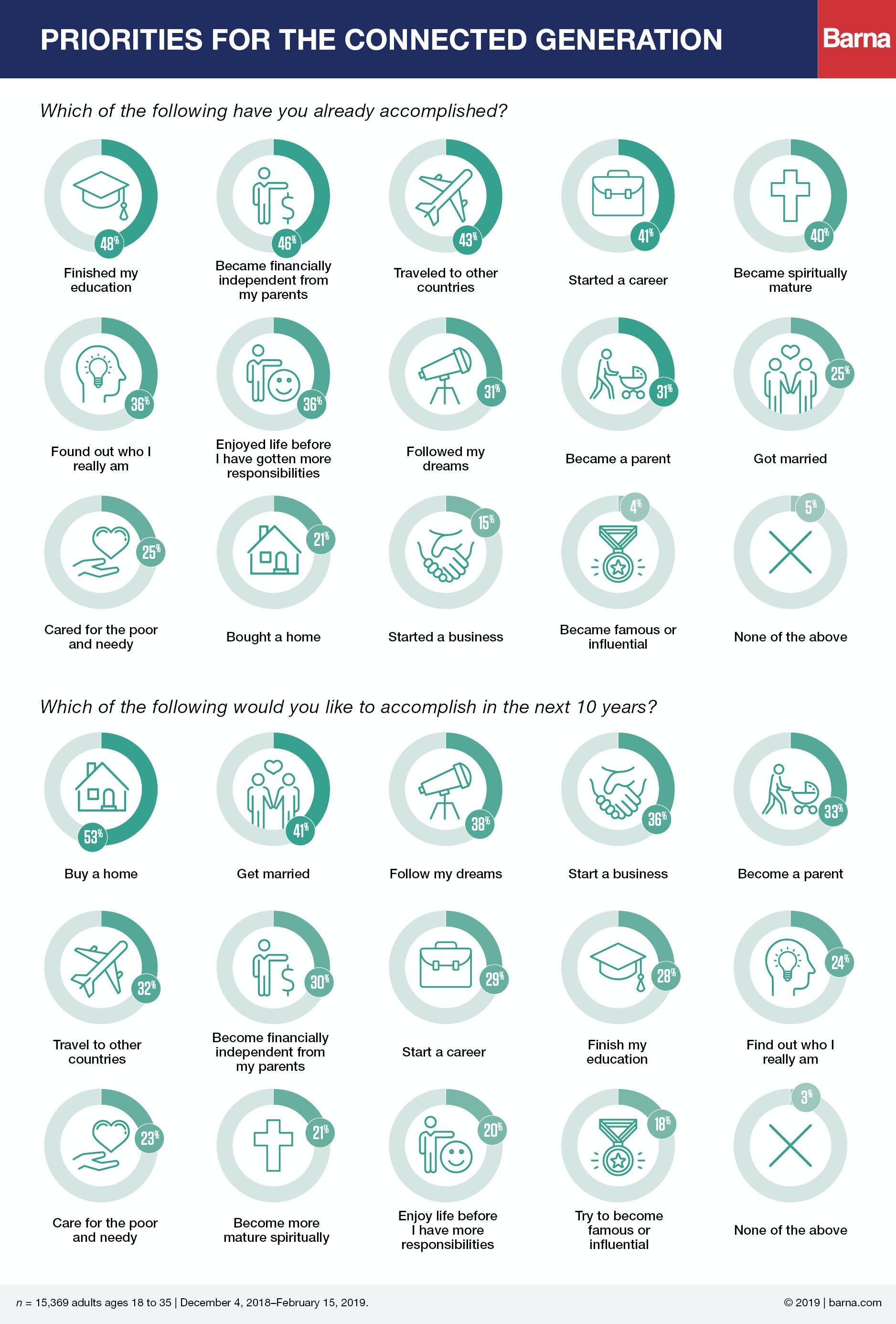 Looking toward the future and, more specifically, establishing priorities for the next 10 years, a large percentage of young adults expresses a desire to now buy a home (53%), get married (41%) or become a parent (33%).

While family-oriented goals may climb higher on the list of priorities as these respondents move further into adulthood, nearly four in 10 young adults also aim to follow their dreams (38%) and about one in three wants to start a business (36%), travel to other countries (32%) or become financially independent from their parents (30%).

Nearly three in 10 young adults (29%) want to start their career within the next 10 years, with a slightly smaller percentage still seeking to finish their education (28%). One in four says they want to find out who they really are (24%) in the coming decade, affirming the reality that, while this generation is more globally connected than any before, a significant portion still feels isolated or is seeking to discover their identity and place in the world.

Goals that did not make the top 10 list for young adults around the world include caring for the poor and needy (23%), becoming more mature spiritually (21%) and enjoying life before having more responsibilities (20%). However, a greater percentage of practicing Christian young adults reports accomplishing or prioritizing some of these goals; for example, one in three desires to care for the poor and needy within the next 10 years (32% vs. 21% non-practicing Christians, 26% practicing other faith and 17% no faith).

Data show that Millennials and Gen Z are extremely success-oriented, with both generations moving further away from more traditional life goals of generations past to a life course that demands achievement or at least stability in their education, career and finances. Accordingly, The Connected Generation research uncovered that young adults are just as likely to feel “optimistic about the future” as “uncertain about the future,” as well as “afraid to fail” and “anxious about important decisions” (40% each). Another 36 percent say they feel “pressure to be successful.”

How can the Church partner with and empower young adults as they move toward a future that can sometimes feel uncertain? Read more about helping an anxiety-ridden generation find peace or learn how other faith leaders and experts are addressing these concerns.

This article is written from research found in the newly released The Connected Generation study. Purchase the report or access a suite of related resources at theconnectedgeneration.com.

Photo by Cathryn Lavery on Unsplash

Data featured in this article came from research for The Connected Generation report. Purchase your copy today!

Barna conducts tens of thousands of interviews every year, attempting to make sense of public opinion, cultural trends and religious identity. This year, our most-discussed research and reports were those that strengthened our profile of young adults—not just in the United States but in 25 countries around the globe—and had a particular focus on understanding the forces shaping the future of evangelism and discipleship. To wrap up 2019, we’ve compiled our 10 most popular releases of the year.