It may come as no surprise that the influence of Christianity in the United States is waning. Rates of church attendance, religious affiliation, belief in God, prayer and Bible-reading have been dropping for decades. Americans’ beliefs are becoming more post-Christian and, concurrently, religious identity is changing. Enter Generation Z: Born between 1999 and 2015, they are the first truly “post-Christian” generation.

More than any other generation before them, Gen Z does not assert a religious identity. They might be drawn to things spiritual, but with a vastly different starting point from previous generations, many of whom received a basic education on the Bible and Christianity. And it shows: The percentage of Gen Z that identifies as atheist is double that of the U.S. adult population. To examine the culture, beliefs and motivations shaping this next generation, Barna conducted a major study in partnership with Impact 360 Institute, now available in the brand new Gen Z report. In this release, we take a look at their views on faith, truth and the church in a time of growing religious apathy.

The percentage of teens who identify as atheist is double that of the general population. Click To Tweet

Atheism on the Rise
For Gen Z, “atheist” is no longer a dirty word: The percentage of teens who identify as such is double that of the general population (13% vs. 6% of all adults). The proportion that identifies as Christian likewise drops from generation to generation. Three out of four Boomers are Protestant or Catholic Christians (75%), while just three in five 13- to 18-year-olds say they are some kind of Christian (59%). 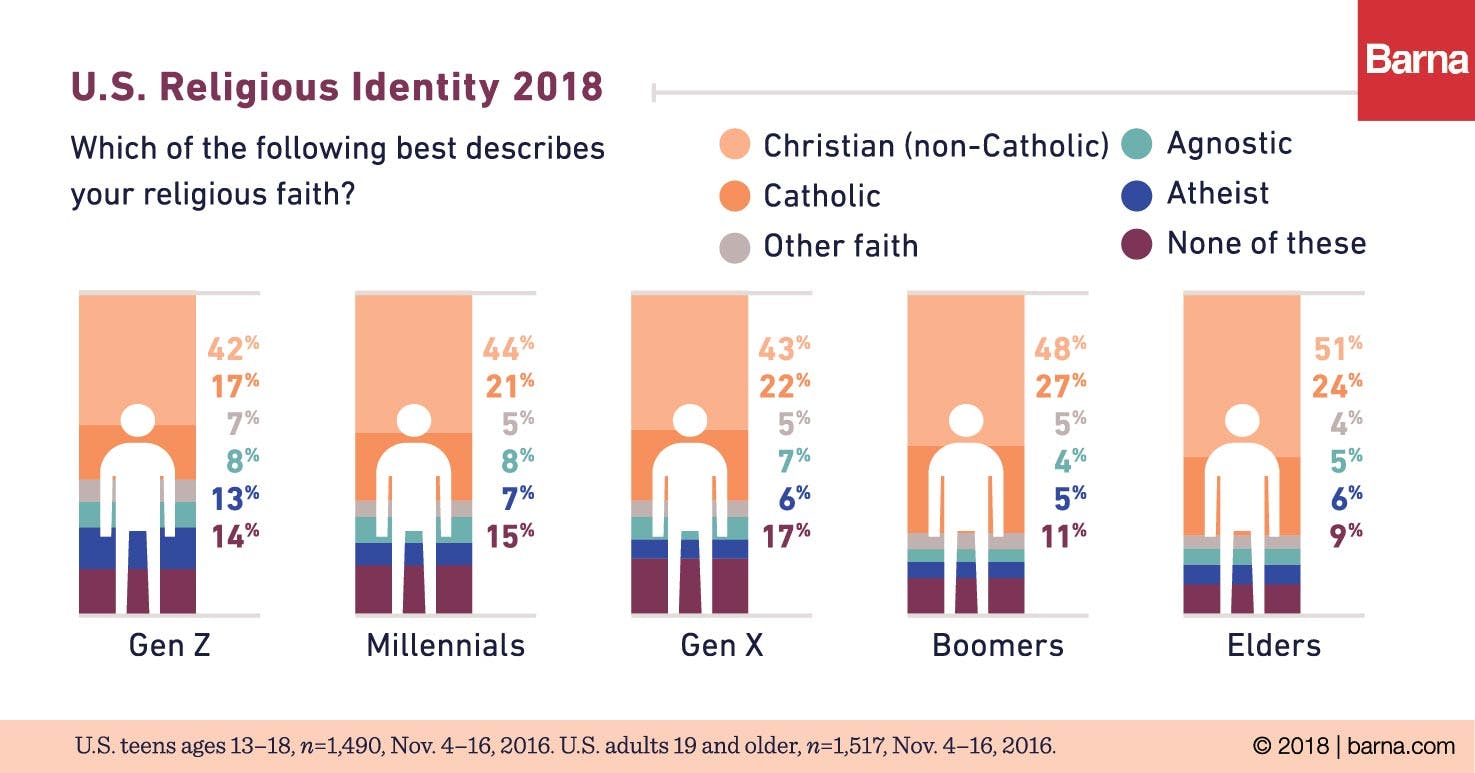 So what has led to this precipitous falling off? Barna asked non-Christians of all ages about their biggest barriers to faith. Gen Z nonbelievers have much in common with their older counterparts in this regard, but a few differences stand out. Teens, along with young adults, are more likely than older Americans to say the problem of evil and suffering is a deal breaker for them. It appears that today’s youth, like so many throughout history, struggle to find a compelling argument for the existence of both evil and a good and loving God. 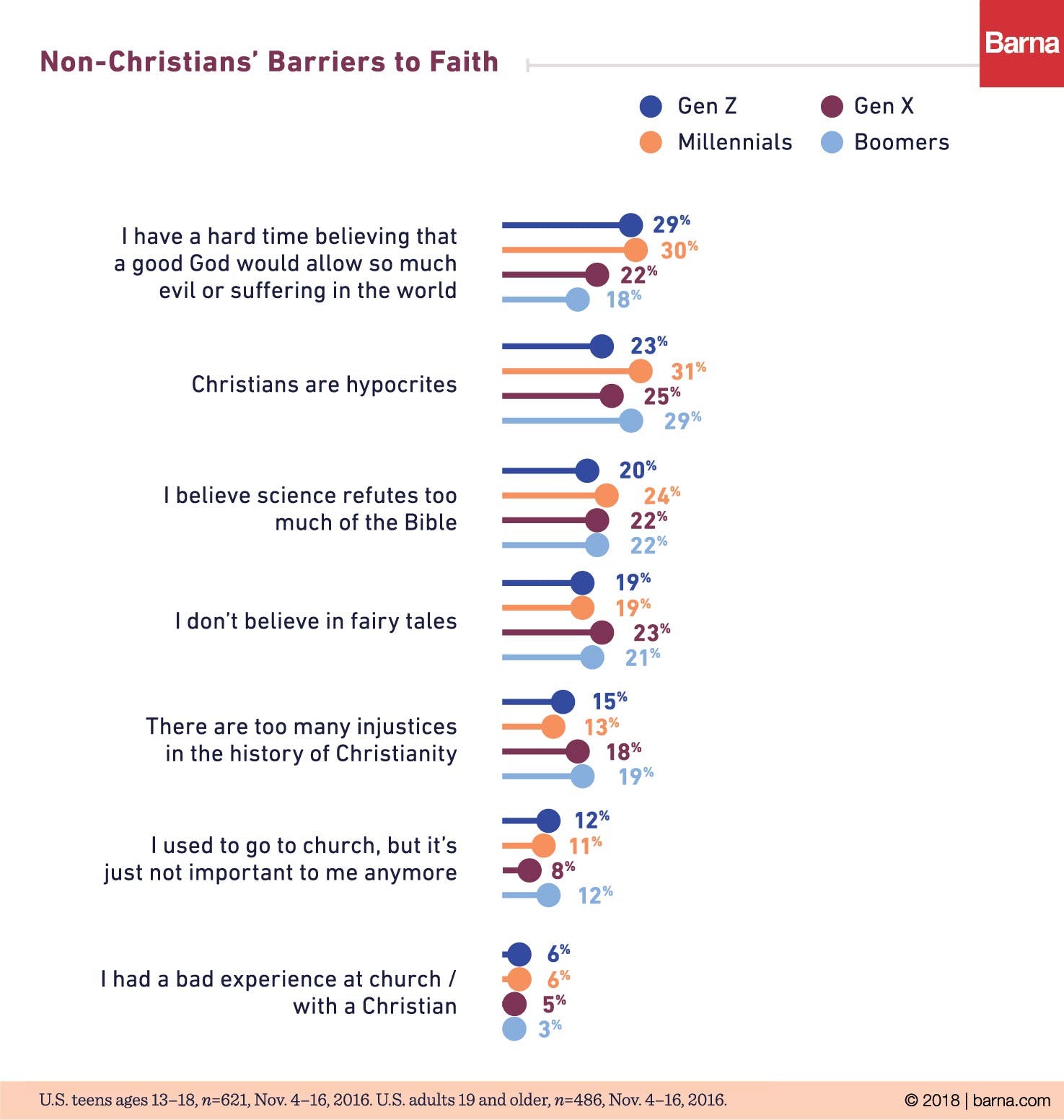 Interestingly, Gen Z nonbelievers appear less likely than non-Christian adults to cite Christians’ hypocrisy as a significant barrier—but just as likely to say they have personally had a bad experience with Christians or a church. On a separate but related question, teens overall are somewhat less inclined than U.S. adults to strongly agree that “religious people are judgmental” (17% vs. 24% all adults). Current political issues, especially LGBTQ rights, poverty and immigration policy, may impact whether this perception holds as Gen Z gets older.

Meet the Next, Next Generation

An Increasingly Elusive Truth
More than one-third of Gen Z (37%) believes it is not possible to know for sure if God is real, compared to 32 percent of all adults. On the other side of the coin, teens who do believe one can know God exists are less likely than adults to say they are very convinced that is true (54% vs. 64% all adults who believe in God). For many teens, truth seems relative at best and, at worst, altogether unknowable.

Their lack of confidence is on pace with the broader culture’s all-out embrace of relativism. More than half of all Americans, both teens (58%) and adults (62%), agree with the statement “Many religions can lead to eternal life; there is no ‘one true religion.’” There’s a sense among Gen Z that what’s true for someone else may not be “true for me”; they are much less apt than older adults (especially Boomers, 85%) to agree that “a person can be wrong about something that they sincerely believe in” (66%). For a considerable minority of teens, sincerely believing something makes it true.

At the same time, some are leaning toward sincerity as a marker for truth, more are leaning hard in the other direction. Nearly half of teens, on par with Millennials, say “I need factual evidence to support my beliefs” (46%)—which helps to explain their uneasiness with the relationship between science and the Bible. Significantly fewer teens and young adults (28% and 25%) than Gen X and Boomers (36% and 45%) see the two as complementary.

Nearly half of teens, on par with Millennials, want factual evidence to support their beliefs. Click To Tweet 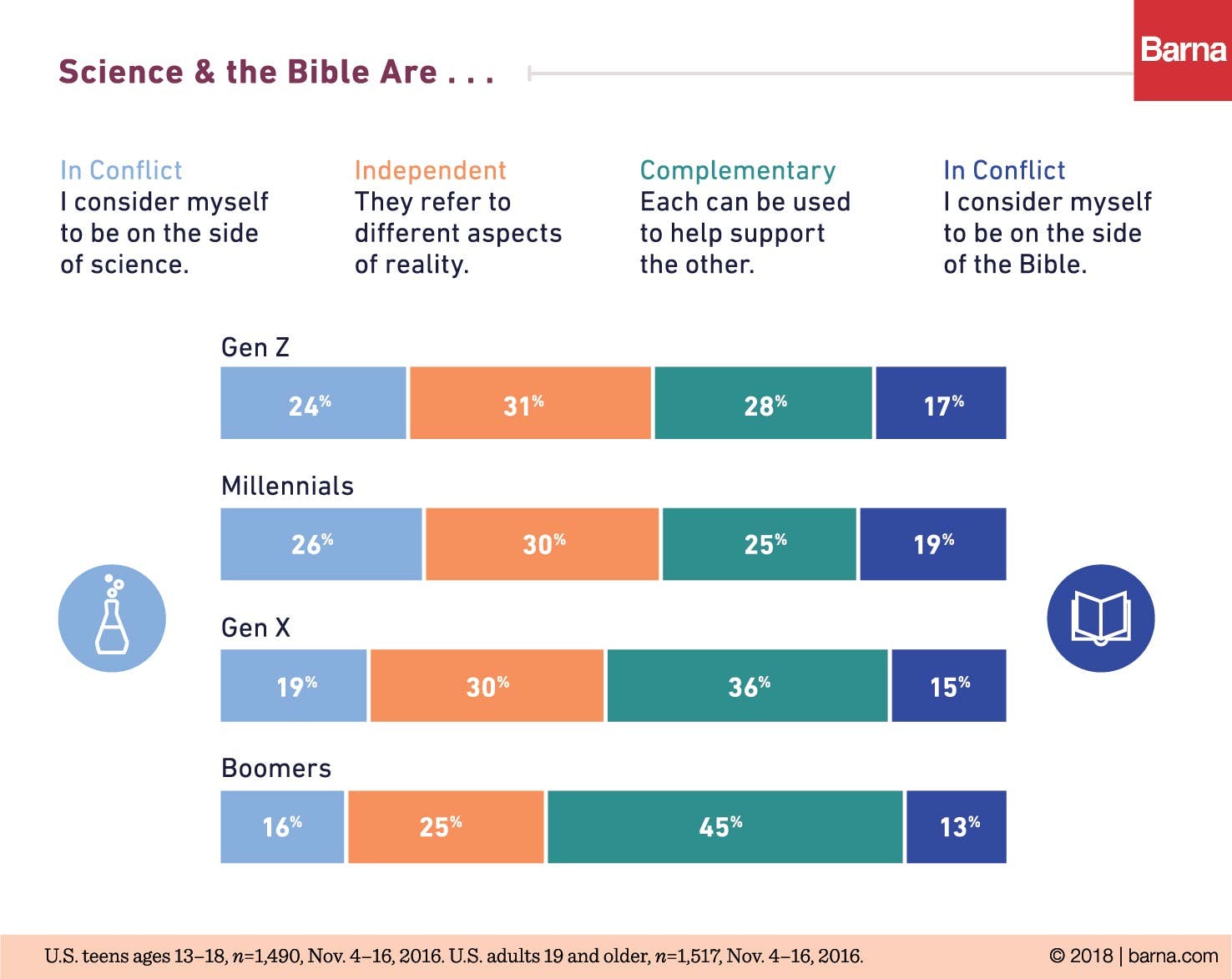 Positive Views of Church, But Few Attend
Among Gen Z churchgoers (those who have attended one or more worship services within the past month), perceptions of church tend to be more positive than negative. Strong majorities of churched teens say that church “is a place to find answers to live a meaningful life” (82%) and “is relevant to my life” (82%), that “I can ‘be myself’ in church” (77%) and that “people at church are tolerant of those with different beliefs” (63%). Negative perceptions have significant currency, however. Half of churchgoing teens say “the church seems to reject much of what science tells us about the world” (49%) and one-third that “the church is overprotective of teenagers” (38%) or “the people at church are hypocritical” (36%). Further, one-quarter claims “the church is not a safe place to express doubts” (27%) or that the teaching they are exposed to is “rather shallow” (24%).

Half of churchgoing teens say the church seems to reject much of what science tells us. Click To Tweet 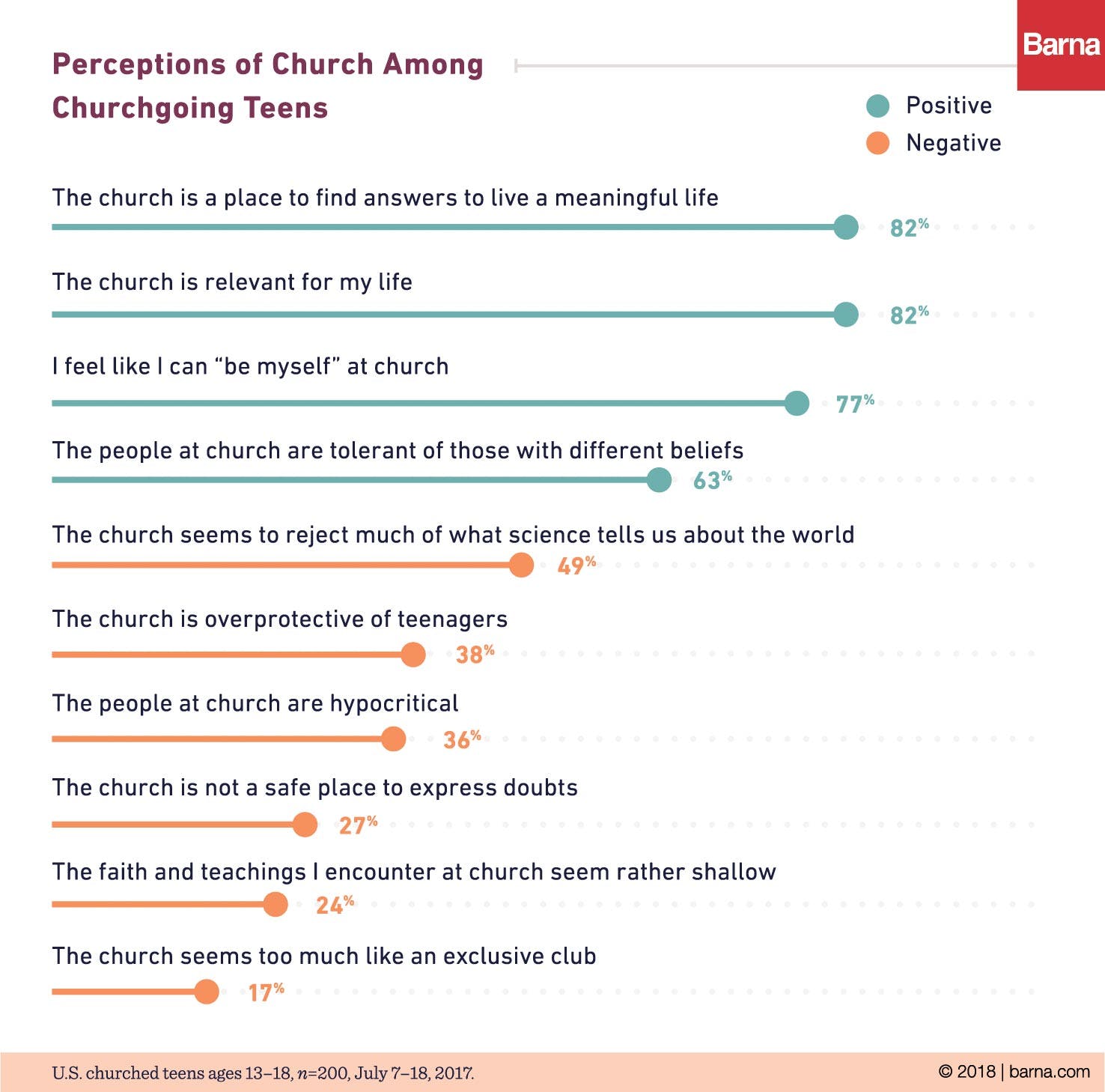 More than half of Gen Z says church involvement is either “not too” (27%) or “not at all” important (27%). Only one in five says attending church is “very important” to them (20%), the least popular of the four options.

Why is church unimportant? Non-Christians and self-identified Christians have different reasons. Among those who say attending church is not important to them, three out of five Christian teens say “I find God elsewhere” (61%), while about the same proportion of non-Christians says “church is not relevant to me personally” (64%). The non-Christians’ most popular answer makes sense (they’re not Christians, after all), but Christians’ reasoning is an indicator that at least some churches are not helping to facilitate teens’ transformative connection with God. 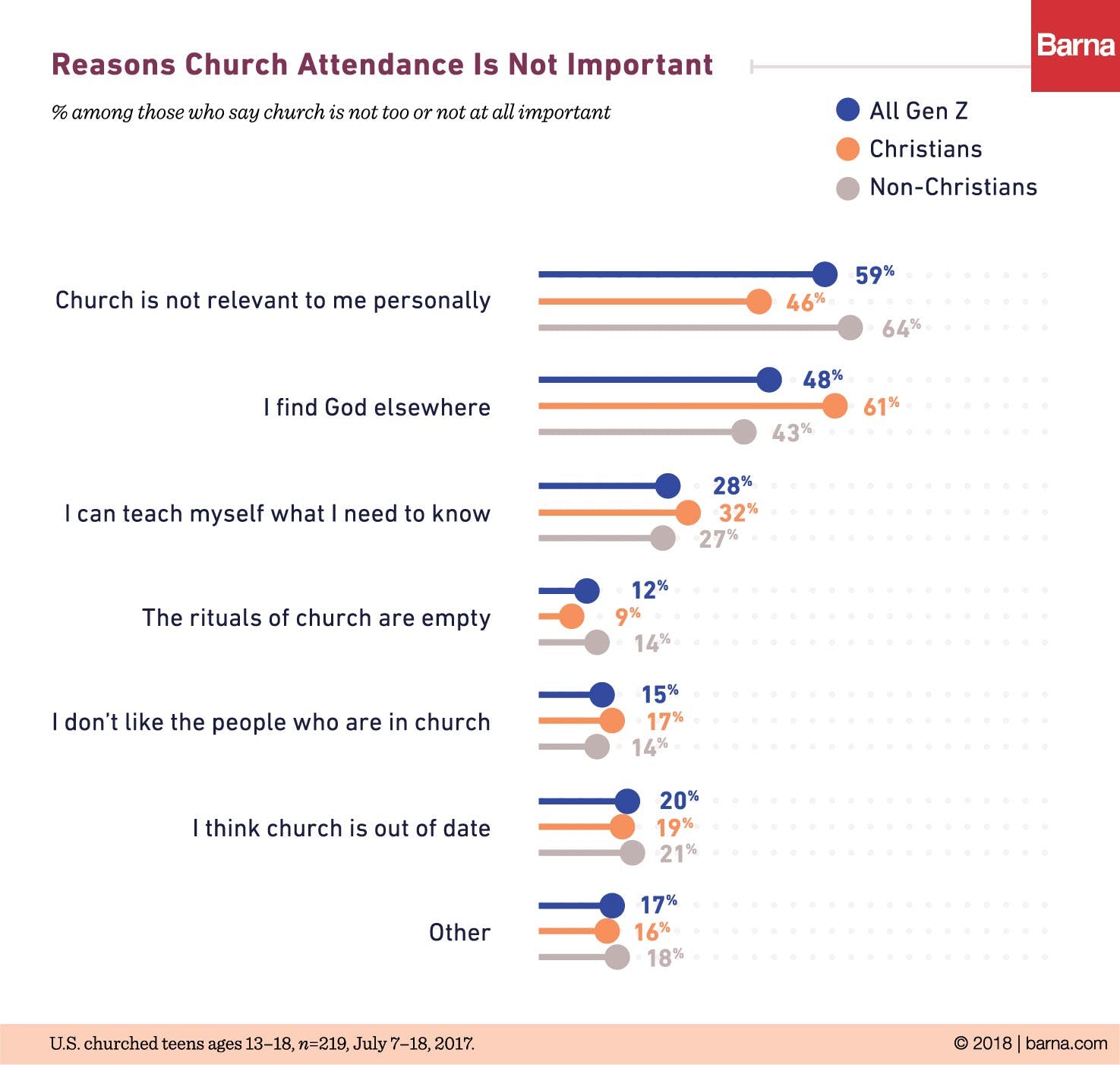 Photo by Alexis Brown on Unsplash

This week marks the one-year anniversary of President Donald Trump’s inauguration. Looking back on what has been an unprecedented year in American politics, Barna recaps some of the bigger political moments since January 20, 2017 and how U.S. adults felt about them.