Gen Z and Morality: What Teens Believe (So Far)

We live in an increasingly “post-truth” political climate. But even before fake news and alternative facts, few Americans were in agreement about, well, almost anything. Over time, consensus on key moral principles has waned, and the younger generations are now inheriting this new moral landscape. In addition to a growing religious apathy and a singular focus on success, another prominent trait of Gen Z is a more relativistic worldview. Though still in a formative stage of life, the leading edge of Gen Z, along with Millennials, appear to hold notably different views about morality than other generations. In a major study in partnership with Impact 360 Institute, Barna’s Gen Z report examines beliefs about morality among the next, next generation.

Morality Can Be a Grey Area to Gen Z
Looking at some basic principles, there is a curious generational shift in the moral compass of Americans. With some awareness that teens’ views may still be quite pliable, we’ll focus on the respondents who indicate the highest level of agreement with these statements in order to show those presently most committed to these beliefs. At this extreme end, one-quarter of Gen Z (24%) strongly agrees that what is morally right and wrong changes over time based on society. There is a wide generational divide on this point: Twice as many Gen Z than Boomers (12%) believe this. The centrality of the self as moral arbiter is also higher among the younger generations—21 percent of Gen Z and 23 percent of Millennials believe each individual is his or her own moral authority—though Gen X (18%) and Boomers (17%) aren’t too far behind on this one. As mentioned, these are only the proportions who strongly agree, so this is perhaps just a hint of a broader public acceptance that morality can be fluid. Teens in Barna focus groups elaborated on their perspective. One participant said, “Society changes, and what’s good or bad changes as well. It is all relative to what’s happening in the world.”

24% of Gen Z strongly agrees that what is morally right and wrong changes over time based on society.

Elders are a shrinking proportion of the overall population, but for perspective, fully three out of five among the eldest generation (61%) strongly agree that lying is immoral, while only one-third of Gen Z (34%) believes lying is wrong. There is a continuous slide by generation in conviction about this moral principle.

Where Gen Z Stands on Hotly Debated Issues
This study also asked teens about where they stand on some commonly debated ethical and legal issues. For example, though Gen Z are the most progressive on abortion, almost three in 10 believe it is wrong (29%), more than most other issues included in the survey.

About four in 10 Gen Z feel a strong conviction that marriage ought to be a lifelong commitment between a man and woman (38%, on par with Millennials at 37%). Despite having firm feelings about fidelity, Gen Z is more lenient than older adults on this topic, evidenced by the gap between them and Boomers (47%) and Elders (66%). There are similar divergences when it comes to issues of sexuality, on which Gen Z tends to be least conservative. For instance, only one-fifth (21%) believes sex before marriage is wrong—though they are mostly on par with other generations, with Gen X being the most conservative (26%). They are least likely to take issue with same-sex sexual activity; only one-fifth (20%) is strongly opposed to it. The opinions on this among all age groups are somewhat mixed, but disapproval of homosexuality generally increases by generation. 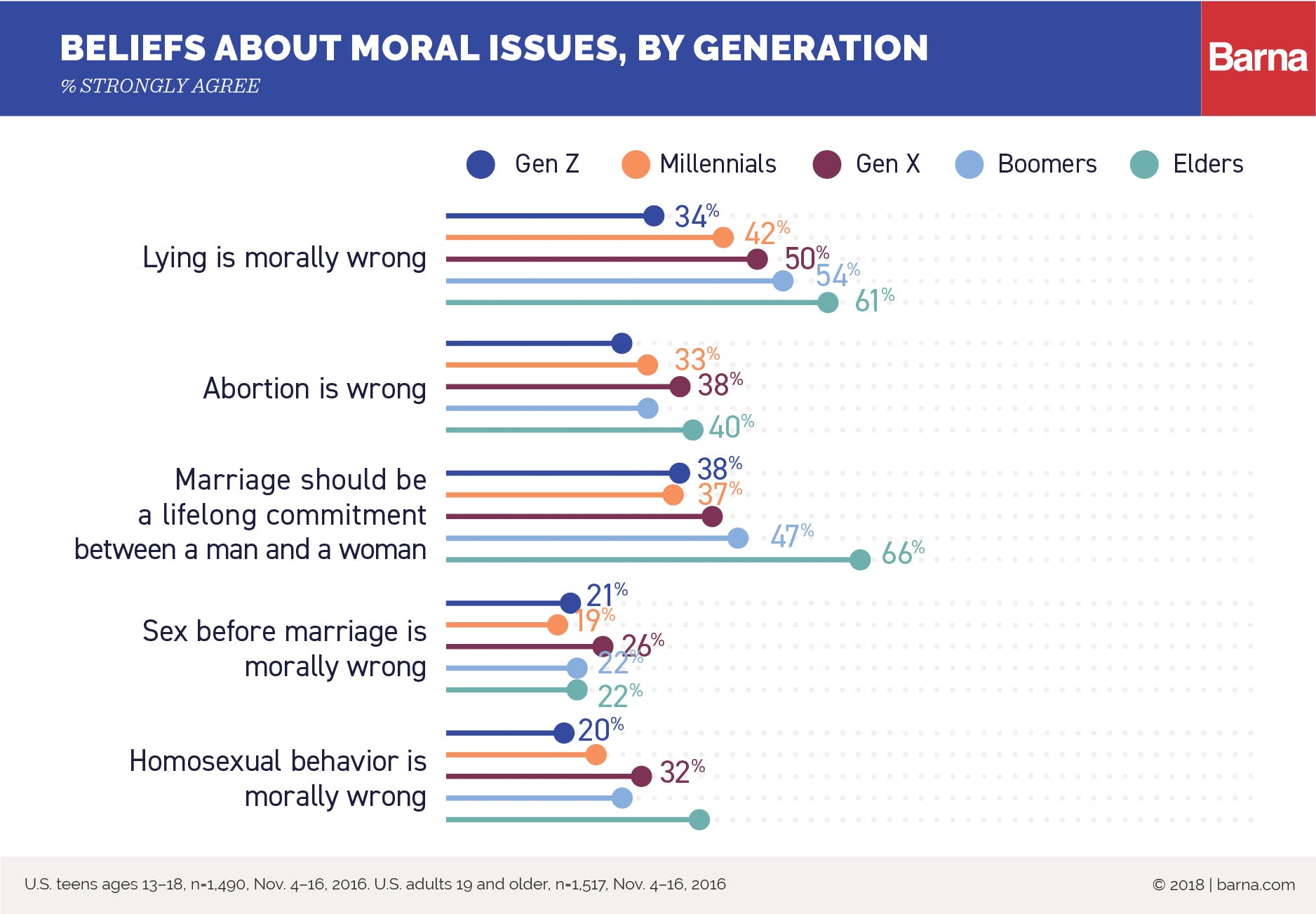 21% of Gen Z strongly believes sex before marriage is wrong—though they are mostly on par with other generations, with Gen X being the most conservative (26%).

How Faith Impacts Gen Z’s Views of Morality
Engaged Christian teens (see definition below) are a stark contrast to their peers on moral issues. There are significant gaps between their beliefs and all others, including other churchgoing teens, suggesting that church attendance alone does not transmit more traditionally orthodox views. For instance, engaged Christians are more than twice as likely to say that lying is wrong (77%) compared to their churched counterparts (38%), and almost four times more likely than those who claim no faith (20%).

The belief that lying is morally wrong is the most commonly shared moral sentiment among the faith segments, alongside marriage as a lifelong commitment between a man and a woman. The greatest differences surround sexuality. For instance, more than three-quarters of engaged Christians believe sex before marriage (76%) and homosexual behavior are morally wrong (77%), compared to only fractions of those with no faith (5% and 4% respectively) and one-quarter of churched Christians (25% and 24% respectively). To Gen Z, the Right Beliefs Are the Ones That Don’t Hurt Anybody
The reasons behind these shifts are myriad and complicated. These young Americans have come of age in an incredibly complex world with access to more information and ideas than any other generation before them. They are also the most diverse generation in history. These realities have not only broadened their horizons and sources of input, but inculcated a deep sense of empathy. For instance, Gen Z as a whole are generally opposed to challenging others’ beliefs, likely driven by a desire to avoid offense or to acknowledge the value of other perspectives.

The convictions of engaged Christians, however, are more of a mainstay. They part ways with other teens when it comes to evaluating the reliability of their own beliefs in light of how those beliefs might affect others. Engaged Christian teens (and adults, for that matter) are twice as likely as their peers to strongly disagree that “if your beliefs offend someone or hurt their feelings, they are probably wrong.” That is, two-thirds do not equate the truth of their beliefs with how appealing (or unappealing) they are to others.

NO FAITH identify as agnostic, atheist or “none of the above.”
OTHER FAITH identify with a religion other than Christianity.
ENGAGED CHRISTIANS identify as Christian, have attended church within the past six months and strongly agree with the each of the following:

Photo by Nicole Harrington on Unsplash

A new Barna report on vocation shows that most Christians say they feel supported by their church when it comes to their career, claiming their local congregations help them understand how to live out their faith in the workplace.