22% of Practicing Christians Feel Responsibility to Help Those Facing Discrimination

For a recent study on race and equality in America, conducted in partnership with The Reimagine Group, Barna set out to contribute to a broader understanding of race relations in our present moment and equip church leaders with context for challenging conversations. This report, titled Where Do We Go from Here?, represents the first of several new Barna efforts to study race and the Church and assesses perceptions of the nation’s reputation and what practicing Christians—across racial, denominational and political fault lines—feel should be done to repair the damage.

In light of Martin Luther King Jr. Day, taking place this year on January 20, we wanted to take a closer look at some key findings from this report as well as offer data from past Barna studies on discrimination and racial injustice.

Who Should Address Discrimination?
One goal of Where Do We Go from Here? was to identify some social causes that practicing Christians feel the Church at large or individual Christians are called to address—in other words, some key areas in which faith requires people to be hands-on ministers of mercy. Among examples of groups that could be considered in need of relief, Barna included people who face discrimination.

Overall, just over one-fifth of practicing Christians (22%) says they have an individual responsibility to help those who experience discrimination; this is the top option selected, over other individuals, organizations (Christian or otherwise) and churches who could lend a hand. Though there are certainly many groups who might be victims of discriminatory attitudes or behaviors in the U.S., a primary example is racial or ethnic minorities. Thus, responses to this question are pertinent to broader discussions of racial justice or reconciliation. By race, there are few significant differences in how practicing Christians see a responsibility to help, in terms of offering resources.

Younger generations tend to feel churches should be the primary source of support to those who have been discriminated against (21% of Millennials, 22% of Gen X), while Boomers assume a personal duty to help (27%). This could be linked to a growing public conversation on the realities of systemic injustices and whether their solutions should be individual or institutional in nature. 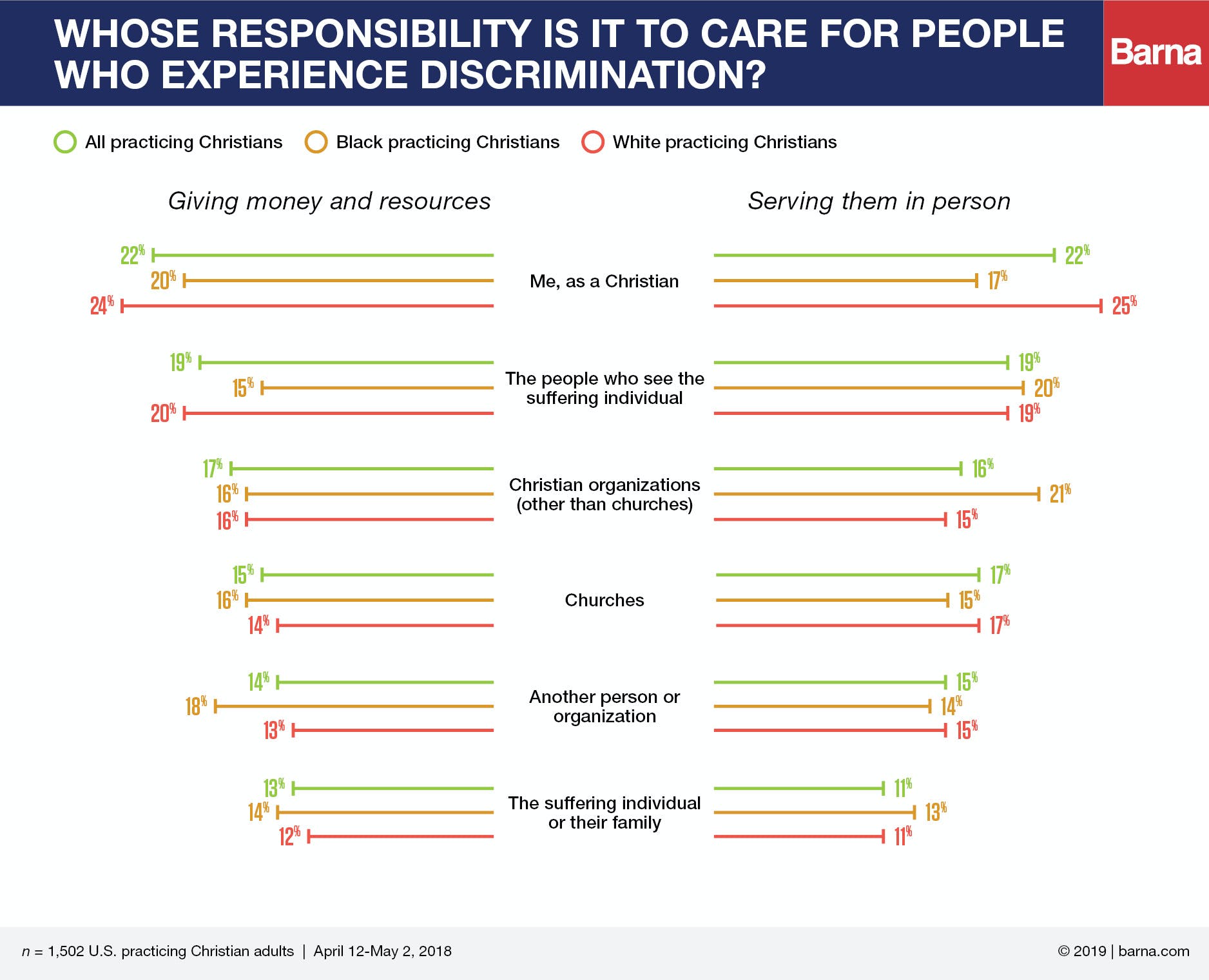 A Political Predicament
While exactly half of practicing Christians agree that the history of slavery still impacts the U.S. today, one of the starkest divides observed throughout this study occurs along lines of political ideology. In short, practicing Christians who have liberal views—just 17 percent of this sample—are dramatically more likely than practicing Christian conservatives (52% of the sample) to perceive consequences of racist structures, both past and present, in the U.S. Not surprisingly, moderates tend to occupy a middle ground between liberal and conservative approaches to this issue.

Three in four practicing Christian liberals (76%) agree that the effects of slavery are still felt in the country today. Conservative practicing Christians are just as likely to agree (38%) as they are to disagree (39%) that race relations remain fraught because of this painful history. A not insignificant proportion of conservatives, however, is unsure (17%). Though few practicing Christians of any political conviction say minorities rarely or never experience undeserved hardships, liberals are firmly convinced these obstacles exist. Two-thirds in this camp say there are “always” (32%) or “usually” (34%) hardships for minorities, well above the percentage of conservatives who agree (11% “always,” 19% “usually”). Instead, the bulk of conservatives says these challenges “sometimes” occur for non-white Americans (57%). 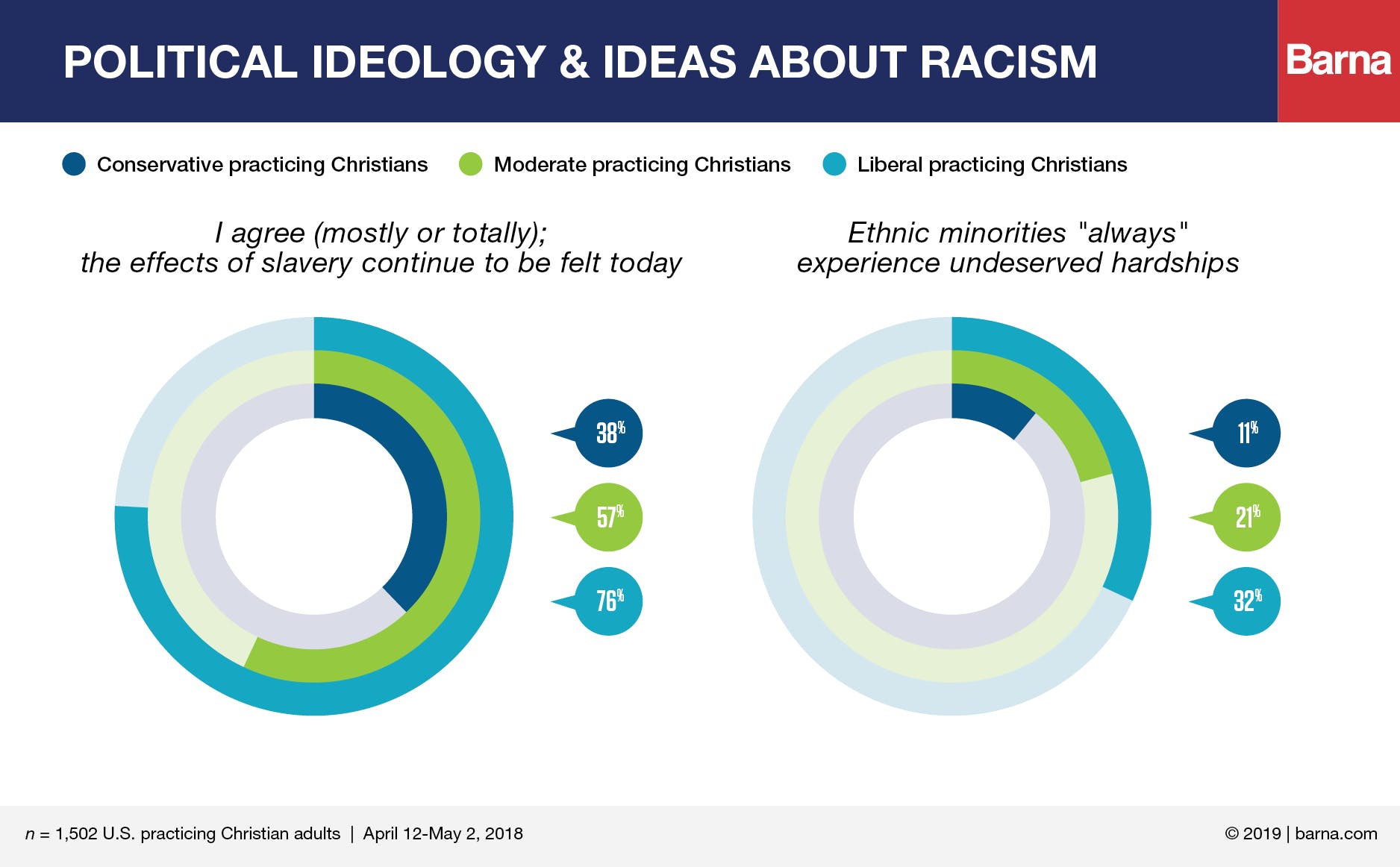 Barna studies, including this one, point to correlations between diverse community and openness to the plights and perspectives of others—but among political factions, it’s unclear how this trend plays out. In fact, both Christian liberals and conservatives are similarly likely to report having friends of other ethnicities (64% conservatives, 69% liberals), as well as of different religions (76% conservatives, 72% liberals) or income levels (78% conservatives, 73% liberals). Liberals, however, are more likely to be representative of racial diversity to begin with— just over half are white (52%), compared to eight in 10 conservatives (80%)—so when they affirm the reality of ongoing challenges for people of color, many may do so from a personal place.

Further, Barna studies show that the personal nature of these topics may be amplified by the digital nature of discrimination and discourse today. For instance, 70 percent of U.S. adults say that hate speech in America has increased over the last five years, with many pointing to the internet as a catalyst. Tellingly, nearly half of U.S. adults who have experienced hate crime and / or hate speech in the past experienced it online via social media (45%).

And, as indicated above, views on racism, discrimination and the nation’s history are inextricably linked to our political realities, which are often in a state of unrest. For faith leaders, this makes already sensitive subjects even more difficult to address. Pastors today may rightly wonder: How can churches have a holistic, biblical response to discrimination and racial injustice? What does it look like to have constructive conversations, let alone foster unity, in a divided culture?

If you’re a leader preparing to tackle tough topics with your congregation or community on Martin Luther King Jr. day, in Black History Month and beyond, here are some resources from past Barna studies to help you cultivate informed, compassionate discussions.

The above is an adaptation from the Where Do We Go from Here? book. Check out this blog post for more articles and resources surrounding the topic of discrimination.

Photo by Gift Habeshaw on Unsplash.

Barna spent much of last year researching and learning more about what we are calling the connected generation, the 18-35-year-olds—comprised of both Gen Z and Millennials—who are the future of our world. The Connected Generation report, conducted in partnership with World Vision, takes into account 15,369 interviews across 25 countries in 9 languages, allowing us both a broader and more-focused lens with which to understand young adults. With 2020 upon us and new year’s resolutions in full swing, we wanted to highlight the top accomplishments and goals of this generation.